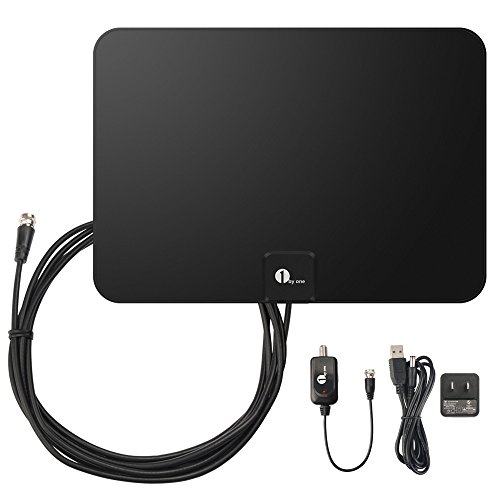 Be Careful before You adhere it! - UPDATE BELOW

SEE UPDATE BELOW! I finally got this 1Byone 13" amplified antenna after a shipping mistake and couldn't wait to try it out. I was currently using a Radio Shack amplified antenna but had a lot of problems with getting a clear picture most of the time. I live about 25 miles from Chicago and our Chicago CBS station is one of the last 3 to upgrade in the country so reception was non existent for my home. I followed the instructions, which are clear to follow and had this 1Byone installed in no time. I put it in a corner window pointing to Chicago and ran the channel search, what a SURPRISE - 52 channels, even CBS as clear as could be!

With the old antenna I was able to get only about 38 channels so what more can I say other than I am impressed with the 1Byone amplified antenna!

Now for the bad: when I first did the search and everything was great, I had the antenna just leaning on the window supported by the double hung bar. After being so excited about all the channels and how clear they where I affixed the 1Byone antenna to the window with the double sided tape pads they include (3) within inches of the scan. Bad part starts now - after sticking it to the window my reception is not that great anymore. Most problems are with the UHF stations that should be the strongest signals, which are all except CBS which still always comes in clear - go figure. I have tried to get the antenna off the window every possible way without breaking it but the tape won’t budge.

So best advice I can give is YES this antenna works GREAT, just be careful before you make it a permanent placement.

UPDATE: So after owning this antenna for about 9 months it has given out. I now can no longer get all the channels I could in the beginning and those I can still get, about 12, are always breaking up and impossible to watch. The amplifier still shows a red light on, which means it is suppose to be working but doesn’t seem to be any longer.
Now comes the GREAT part! I contacted 1byone to let them know that the antenna was no longer working. They say this has a 1 year warranty so I wanted to see if they would stand behind it. They had me try 2 different methods to see if it would work but it didn’t help. After no luck getting it working 1byone has sent me a brand new antenna no charge to replace the defective one! I noticed that it is now somewhat different at the amplifier so maybe this will make a difference. In any case, 1ByOne stands by their products and I would recommend them to anyone I know.