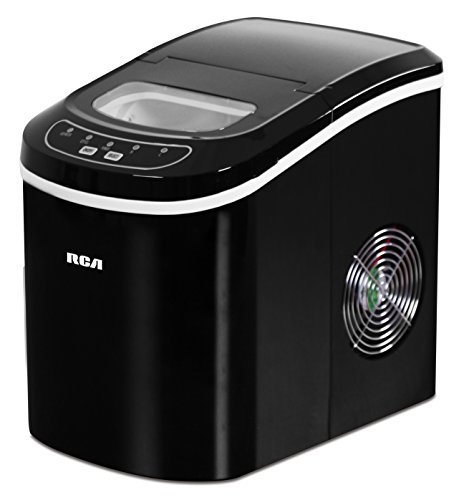 First of all, remember that this is NOT a $3,000 ice maker...keep that in mind and you should be happy. I was pleasantly surprised that this little machine made enough ice to completely fill a 42 ounce container in less than an hour. If you don't use the ice right away, don't worry, as it SLOWLY melts, the water goes back into the tank to be turned into ice again. This is a great option for a wet bar, the family room or the home theater. Don't expect tons of ice (but remember how little it cost) I wish the cubes were bigger (think of a large thimble) but it works.

Do not buy! Does not last!

This, by far, is the worst product I've ever purchased. The first one I bought lasted almost a year before it just stopped working. I called the Igloo people and was shocked to find out that they only license their name to be plastered on this flunky product. It's actually made by Curtis Manufacturing. I called just before the warranty period ended and I was instructed by the tech support people in India to "reset the unit" by turning the temperature to "zero" empty it and unplug it and let it sit for three hours. First, there is NO TEMPERATURE selector knob anywhere! This tech guy didn't know what he was talking about. I did the rest of what he told me, I emptied it and let it sit for three hours... nothing. I let it sit for three days... nothing. It just stopped working. I called them back and went around and around until the point that they offered to replace the unit. I had to send in my receipt and they would send me a claim and procedure for shipping the product back to them. Upon receiving my receipt, they said it was already past a year and there was nothing they could do, the warrany had expired. YES... it expired while I dinked around with them trying to reset it and follow all their instructions and sending my receipt through snail mail. BUT... I had called and lodged my initial complaint DURING the warranty period, but they didn't care about any of that. They refused to help me, so I called Igloo Corporate and lodged a complaint. After all, this piece of junk had the Igloo name on it. I got in touch with the President of Igloo, who was very nice and apologetic about the issue. He made arrangements for me to receive a replacement unit. I thought it was all over with, and that the replacement icemaker would work like a charm. It did.... for three months. The replacement failed just like the previous one. It just stopped working. Period.

I called the President of Igloo back again. He finally got tired of dealing with me, so they refunded my money. I told him they should look at the quality of this product and reconsider putting the fine Igloo name on such a dud. It upsets me that we consumers see a “brand name” and think “quality” and in reality, this is just junk being manufactured overseas. You will find this model with the “Coldspot”, “Magic Chef” and other well known brand names pasted on them. They are the same junk by Curtis Manufacturing. As I’ve done more and more research, I have found a lot of other complaints about this same model under different brand names.

By the way, most of the positive reviews are from folks who just received the product. They haven’t owned it long enough to fail yet. I loved it while it worked. It’s a good idea, but just poorly manufactured. I just went back to using the icemaker in the freezer of my refrigerator.

Update: 11-24-15 - I have received a lot of messages asking how I worked out a refund with Igloo Corporation. It was simple, I just looked them up online, found the names of the president and executives, got their email address and sent my honest, respectful complaint. The president of Igloo Corporation was not under any obligation legally to help me since they don’t actually make or sell this item. Igloo only licenses their name to be used on it, Curtis Manufacturing is the company who is responsible for it. But the Igloo president was nice enough to help me because I wrote a thoughtful and respectful complaint letter and because I honestly believe he had some concerns about the Igloo name.

Things at Igloo Corporate have changed since my initial review and there is a new president in place now. Your complaint may or may not be taken as seriously as was mine. That doesn’t mean you should give up. Write them, call them, email them. This is a dud of a product and they should take their name off of this ice maker or make the manufacturer take more interest in making a better quality product. We consumers have to fight back. If you want to complain to Igloo Corporation, Google them and you’ll find their address in Katy Texas. Google “Igloo Corporation President” to learn the name of the president, then call or write a snail mail letter if you cannot find his email address anywhere. Don’t just spend your hard earned money on something you give up on because it takes a few minutes to write a simple letter. There is power in complaining! Good luck!