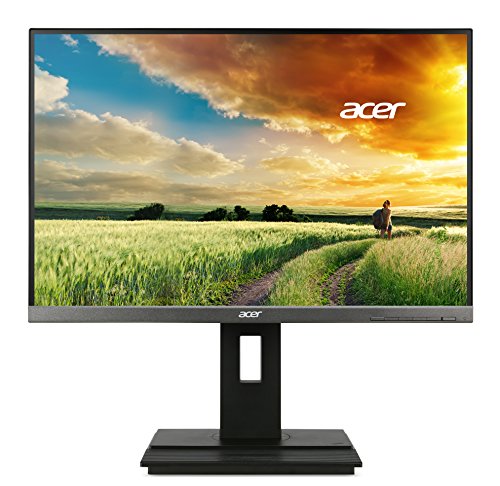 The monitor showed up this morning, and I am very pleased with it. I run dual 24's and my previous Acer (AL2416W) began to fail after about 5 years. After a lot of searching for another 1920x1200 monitor, I came across this one. I was very disappointed at how many monitors are only 1920x1080 today.

It’s actually better than what the picture shows. The bezel is only 1/4" around the sides and top, but the picture appears much larger. If I could justify it, I would replace my 2nd monitor with another one of these.

The base is very impressive, and very high quality. It may sound trivial, but I want my two monitors to match each other near seamlessly. Not only does this have simple height adjustment of several inches, but the base also pivots, which isn’t described in the ad. Because I didn’t realize that the base pivoted, it took me a couple minutes to realize how it assembled. It appeared to be going together wrong until I realized it was already rotated 45 degrees.

The screen is very bright with excellent white balance…as a new monitor should be. It does make my other monitor appear rather “gray”, but that too is expected from a monitor that’s a few years old.

I was also surprised by the box contents, with a USB3 cable, Male-to-male audio plug (great for connecting a cell phone to a stereo :-)), VGA cable, DVI cable, and a Display Port Cable. Because I am running a high-end Nvidia Quadro card, I need the Display Port cable. But the one included was only 5-feet long. So I did replace this with a longer cable to reach my computer.

An Absolutely Fantastic Monitor (with some pros, cons, and comments regarding what gamers should look into before committing)

So, why did I choose to go 4k and how did I end up on this monitor? Well, my LG monitor broke about 24 hours ago and I’m a software engineer by day, so replacing it as soon as possible was pretty crucial. When I’m traveling, I use a Chromebook Pixel that I run Linux on at its native resolution (2560x1700 – on a 12.85" screen, people can’t believe I can read it just fine)… so, needless to say, I really value large resolutions.

After looking through most of the 4k monitors in the sub $600 range, I was extremely wary of blindly ordering a TN panel and even more so of them all being only 28"… so, I headed out to the local Micro Center to see some in action. After playing with a few different 4k monitors and discussing all the different options with one of their specialists, I decided to pay the premium for the IPS panel… but, which brand should I go with? This was the easiest part. Running 4k natively on a 24" is very hard to read unless you’re about as far away as you would be with a laptop. 28" is much better, but sitting back in a desk and trying to write code or read text in general… not the best choice. But, 32" is pretty perfect. I sit about 2’ away from my monitors and can read everything perfectly on this display.

So, what do I like about it? Well, it’s a 4k monitor that’s incredibly beautiful to look at! In addition, it has a 4-port USB3 hub, VESA mounting ability, and it can be lowered/raised, tilted, and [technically] swiveled (the base swivels as opposed to it swiveling on the base). The built-in menu has tons of settings. It has picture-in-picture (PiP) for its sources. You can either have two sources shown side-by-side or one source in a smaller window in any corner. A really neat future, although I have a hard time understanding exactly why you’d want to do that (outside of maybe hooking up a PS4 and playing a game while waiting for a download or something). I also recently noticed a little etched in paper-clip symbol on the base where there’s a little magnet. A very cool little addition.

And what do I dislike? My biggest complaint is regarding the cables it comes with. The DisplayPort cable is 4’ and, as far as I can tell, isn’t 1.2 compliant (meaning it can only do 30hz) – Beyond that, how it swivels. I’d prefer it swiveled on the base as opposed to the entire base swiveling. It has an “ergostand” which kind of implies it can be rotated and it really looks like it can be… except, it won’t budge. That said, if I really cared, I could get a VESA mount and just mount it sideways. The ability to daisy chain would have been nice, although I’m not even sure that’s possible to implement at this time. (The next DisplayPort will support 8k displays or 2 - 4k displays in a daisy chain configuration… but, that’s not out yet) Beyond that, there’s really nothing I truly dislike about it so far… just a bunch of “well, if I have to choose something to nitpick…” – (Update 12/15/14) – When you turn the monitor on, it displays “Acer” as it’s booting. The boot-up sequence takes quite a few seconds, so you won’t see your desktop for about 5-8 seconds after you hit the power button. As well, if you have your mouse plugged into the monitor’s USB ports, it will work intermittently during these seconds. As annoying as it may sound, it really doesn’t bother me… it’s just something I wasn’t used to and felt I should add it to the list! – (End Update) –

So what about gaming? As far as I can tell, gaming performance on this one is identical to my LG. I have an R9 290, so pushing 4k isn’t too much of an issue. I ran Borderlands The Pre Sequel with everything turned up and resolution set to 3840x2160 and it performed fantastic. I didn’t notice any ghosting and had no issues with it. I imagine your mileage may vary, but if you have a graphics card that can pump out the bandwidth and crunch the numbers fast enough… you should be good. That said, I’m sure future monitors will perform even better!

Speaking of [potentially] better, if you happen to be running an nVidia card that supports it, I would consider looking at monitors with GSYNC. If I was in that boat, I likely would’ve erred towards one of those (if I could find one with an IPS panel). From what I understand, it adds a frame buffer in between the picture and the graphics card to eliminate ghosting. AMD is coming out with a (better?) protocol for doing this next year (2015… the first monitors that support it will be released in March by Samsung). I say better because it’s based on an open standard. They’re calling it FreeSync. This means that nVidia will be able to support FreeSync, if they choose to, so AMD and nVidia can both do FreeSync while only nVidia can do G-Sync. We’ll just have to see how that plays out though! (Edit 01/22/15: It’s been noted in the comments that GSYNC is hardware-based and FreeSync is software-based. Reading up on both GSYNC and FreeSync again, I believe this is a false statement and both are software-based. They do require special hardware in the monitor and not all graphics cards will support it though.)

As an addition to the topic of gaming: if I only used my computer for gaming, I would probably stick with a really nice 1080p monitor or considering pushing into 1440p territory. Gaming in 4k isn’t really gaining you anything significant without 4k content. Just my two cents there though. I feel 4k monitors are really more intended for professionals (e.g. software engineers, patent attorneys, graphic designers, people that want to look important) and content consumers (e.g. watching 4k media, like those two videos Amazon and Netflix have available for streaming). But, this is really just an opinion from a software engineer/gamer.

That said… if you’re looking for a 4k monitor and aren’t a graphic designer and/or won’t be doing anything with professional photo/video editing, this is your monitor. I personally would suggest you not settle for a TN panel and not get a monitor below 32" unless you plan on sitting close or scaling everything (which leads to its own set of headaches). Just don’t be fooled by the TN panels saying their color depth is the same. It is, in fact, the same, but the accuracy of a TN panel is garbage compared to an IPS panel. My favorite example of this is… let’s say you have a picture of an apple that has hundreds of different shades of red in it. Depending on where you put that image on a TN panel, those reds are going to look different. Even your viewing angle is going to matter on the colors. IPS panels don’t have these issues.

And before you go rush through the checkout and buy this fabulous product, make sure you have a DisplayPort 1.2 compatible cable in your cart, as the one that comes with it may not be able to push 60hz and it’s only 4’ long.

But enough of my rambling! If you’re a gamer with an nVidia graphics card, go check out G-Sync before committing to anything. If you’re a gamer with an AMD graphics card, look into FreeSync and consider waiting for it to appear. If you do photo/video editing professionally, go find a more expensive monitor. Otherwise, if you want 4k and are willing to pay a premium for a higher quality product with an IPS panel, buy this monitor!

I’ll update this review if I run into any issues in the future. As it stands today, I’m incredibly happy with my purchase and I’d highly recommend it.

Update 12/15/14 - Updated the review to reflect start-up time of the monitor.

Update 01/14/15 - Reporting in: one month in and I’m still loving it. I’ve had zero issues with it. One new slight annoyance is that switching inputs takes a little time and it cycles through all inputs without the ability to hit the button again to skip one. I use it primarily on my desktop, but switch to my laptop dock when I work from home. A very minor annoyance though.

Update 01/22/15 - Updating my review to reflect an inaccuracy that was pointed out in the comments stemming from an error on the product page where I bought it (Micro Center).

Update 05/25/15 - Still loving the monitor. There’s a more frequent issue with Windows 8 where the signal comes in and out frequently when initially turning the monitor on, if the computer was left on. This is easily resolved by just changing the screen to only display on my second monitor and then reverting. I’ve been using only my 4k monitor for the last couple days and haven’t seen this happen, so it may just be a dual monitor thing.

As well, I picked up Wolfenstein: New World Order and there’s definitely input lag on the menu. I tried on my secondary monitor and it’s not there, so I feel fairly certain it’s the monitor. I really don’t notice it when I start the game. At this point, I’m considering getting a better second monitor for games. At the very least, it would let me offer a better comparison as it’s possible I’ve just gotten used to a little input lag over the years. – I also recently had the opportunity to try out the PiP feature with my Raspberry Pi plugged into the HDMI connection and it works beautifully.

I’m still leaving my review at 5 stars as I’m still in love this monitor, input lag or not. For my primary purposes (software engineering), it’s just awesome.