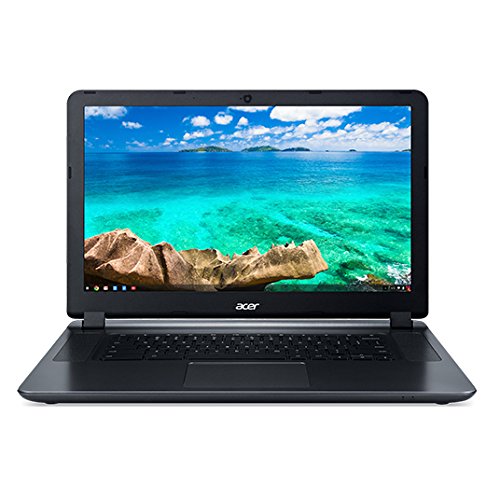 Chromebooks have made great strides since they were largely smallish econoboxes with limited horsepower and specs and this one is an example of what can be done at a lower cost.

The tech geeks might think the specs are a bit amateurish with just 2GB RAM, a 16GB HDD, 15.6 inch screen and a Celeron processor, but these limitations work just fine on an operating system that is largely internet based. Since there is no Windows or OS X to worry about, Linux type base specs will do just fine (yes, the Chrome OS is largely open source, Linux based).

Cosmetically, you’re looking at the usual gray makeup albeit with rounded corners that actually look nice. At just a tick under 5 pounds you might think this is a beast, but you’re dealing with a rather large piece of hardware so the weight isn’t ungainly.

So, let’s cut to the chase and just go to the pros and cons:

Without grand discussions about the OS, I just summarize by stating this is the perfect unit for the casual internet surfer , the student looking for something to pound a report out on or the video watcher pining for a larger screen than a tablet offers.

Can’t go wrong for $200 (hint: WM has it for $20 less), especially considering tablets of a decent grade run this amount.

Made a high school student and mom very happy

My daughter tried this after using a Macbook and a desktop computer. I have to say she totally loved it!

She is a power-user and spends anywhere from 3-6 hours a day doing work on her laptop.

Her school uses Google Docs etc already so set-up took all of 2 minutes! It found the wi-fi on it’s own and once she added her google account details it found all of her docs and browser favorites in seconds.

This was the fastest we have ever set any computer up for use and we have computers come and go all the time.

The other thing she loved was how light it was, she said it felt less heavy in her backpack then most of her books!

I was able to install the same parent watch controls that she has on her other computers and they worked great.

Last thing, video is awesome on this laptop! She was able to view all of her school-work videos as well as her favorite YouTube videos.

Just a heads up that I am an associate and this was rated by mom!

@michigan I like it, you should definitely buy it