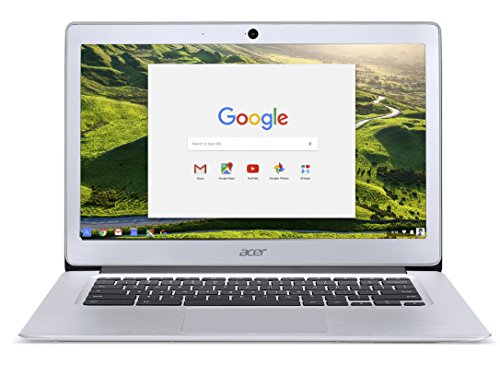 As I write this, the Acer Chromebook 14 is sitting with 13 reviews, all of which are 5 stars... and I do feel a little bit bad here breaking up the perfect game, but after using this Chromebook for a few days, I feel I have an obligation to point out both its strengths and its drawbacks. Even writing that, I can't say I'm completely surprised by all of the 5 star reviews, as there are a lot of things that this Chromebook gets right.

There are five key things worth highlighting here.

First: the screen. Many of Acer’s Chromebooks have, historically, been hampered by their poor displays. Thankfully, this time, Acer has gotten that part right. The Chromebook 14 has a 1080p IPS display with fantastic viewing angles and excellent brightness. I keep it at about 60-70% and it looks fantastic. It feels wonderful to finally say that about an Acer display.

Second: the build materials. Chromebooks have generally been budget-friendly devices, but recently we’ve started to see some that are either mid-range and high quality (like the Dell 13) or are upper-low end budget devices that still use more premium build materials, like the Asus C100P “Flip” and now, the Acer Chromebook 14. Note that I said build materials, and not build quality.

Third: 4GB RAM, 32GB local storage. A more recent trend among Chrome OS devices is the inclusion of 4GB of RAM and 32GB of storage, instead of the 2GB/16GB to which we’ve become accustomed. For a lot of users, the local storage limitation isn’t a big deal, as without applications, local storage isn’t that critical… but it is nice for people who like to locally store music, photos, and movies, or who intent to install Crouton (or are looking ahead to the possibility of Android apps). The extra RAM, however, is great for everyone, as it makes this device more capable of running many tabs, or handling higher demand tasks like streaming content, without tabs crashing out or caching/reloading.

Fourth: Intel N3160 quad-core processor. This processor isn’t exactly going to light the world on fire, but for most of what folks do with a Chromebook, it is going to be adequate, and it provides a user experience that feels significantly faster and more responsive than the N3050 on Windows 10 or Chrome OS, and is also more responsive in Chrome here than the x5-Z8300 is in Windows 10 (such as you’d see in the Intel Compute Stick or Asus E200HA).

Fifth: $299. When you stack up all these strengths and offer them at a price of $299, you’re getting a fairly impressive value proposition here with this Chromebook. The screen is great, for both media consumption and general computing/web browsing; it offers a nice amount of local storage and solid performance via the Intel processor and 4GB of RAM, and it looks sharp, thanks to modern design queues and aluminum build materials.

What’s not to love here, right?

Well… I hate to be “that” guy, but there’s a few things to pick at here.

I keep reading comments along the lines of: “Forget the Dell Chromebook 13 / Toshiba Chromebook 2 2015, this is the Chromebook to get!” And for a lot of people, that’s likely true, but I certainly won’t say that’s true as a blanket statement.

Let’s start with the Dell Chromebook 13. It has a smaller screen footprint, but is thicker and about the same weight, with a similar screen quality (and a tendency for backlight bleed); however, it packs a much more solid construction and a significantly more premium “feel” throughout, including its trackpad, keyboard, and overall feel in hand. It also has much better performance, including an easily upgraded M.2 SSD that has faster read/write speeds and much more flexibility for those looking to install Crouton (to use Linux). That last part is a small subset of users, but it is still worth noting; however, the performance and build quality gap are very real and will be notable to all users. And, of course, the Dell can be purchased with an even faster Intel Core i3 or i5, and can also be upgraded to a touchscreen, which again may be significant if Android apps come to Chrome OS.

What about the Toshiba Chromebook 2 2015? Things are less clear here; the Toshiba again has better performance, and uses a real SSD, but it has less impressive build quality and even less impressive materials; it does offer a backlit keyboard and an even nicer screen, still the nicest of these three.

I think that a lot of Toshiba customers should probably consider the Acer, but those who were aboard the Dell train for its build quality and performance will likely still want to move forward with that device instead of this one; if I had to choose between the two, I’d likely go Dell… but then again, budget isn’t my number one concern. At $300, this is a great purchase…

…which leads me to my next point, the omnipresent comments about “This feels like a $1000 computer!” or “This is just like a MacBook Air for $300!” The problem is that neither of those statements are close to accurate, and have to be chalked up to pure enthusiasm and excitement.

For instance, the $799 Dell XPS 13 feels remarkably better to use than this Acer does, as it has smaller bezels, a much nicer trackpad, a much better (backlit) keyboard, and far faster web browsing and general performance. And while the Acer does resemble a MacBook Air 13 from a distance, when you compare them in-hand, any talk of them being similar will disappear. The Acer is very nice, to be sure, especially considering the price or $299, but tapping the trackpad results in a hollow response compared to the MacBook’s assured sturdiness, and the keyboard lacks the superb feel and response you find in a MacBook keyboard. The Acer may copy the MacBook’s style, but it doesn’t approach it’s premium feel when you actually use it.

This isn’t say the Acer is bad in the abstract; far from it. It has a nice, oversize trackpad that - like pretty much all Chromebooks - is responsive and a pleasure to use. And, its keyboard is comfortable if unremarkable. It also has pretty decent I/O with two USB 3.0 ports, HDMI, and also 802.11ac WiFi. It does unfortunately lack an SD or Micro-SD card slot, however.

I can’t help but feel that people are also slightly exaggerating the performance offered by the N3160. It is solid, and does a decent job rendering pages, and paired with the extra RAM here, it adequately handles streaming content in the background - such as YouTube or Spotify - and still maintains a decent browsing experience across eight to ten additional tabs; but realistically speaking, this Chromebook offers slower performance than the $199 Acer C720 from late 2013. Octane 2.0 benchmarks I ran in Guest mode scored around 8,000 to 8,200 which, again, is not horrible, but isn’t much more impressive than budget devices using the Rockchip 3288 from last year (like the $149 Hisense Chromebook). I only mention this because, in my opinion, you’re getting about $300 worth of performance here; anyone telling you this device runs like a $500 or $800 computer is exaggerating. My Dell i3 Chromebook is much faster at loading tabs in general, especially busy ones like CNN.com, as is my MacBook Air 2014. There’s a very real performance gap here when compared to more expensive devices, but also when compared to Chromebooks running on the Intel 2955U or 3205U/3215U, which in the case of the latter Broadwell chips can churn out Octane scores nearly double what the Acer 14 offers.

None of this means the Acer Chromebook 14 is a bad Chromebook; on the contrary, it is an excellent Chromebook! I led with those first five points for a reason: being able to purchase a decently-performing Chromebook with aluminum build, a 1080p IPS display, 4GB of RAM, 32GB of local storage, and an Intel quad-core processor for $299 is basically what the entirely of the ChromeOS subreddit has been asking for over the past few years; as such I have to tip my had to Acer and commend them on building a very nice Chromebook for the consumer space, one which should do a great job converting people to the idea of Chrome OS.

That doesn’t mean that I can’t be disappointed in the lack of an SD card slot, the hollow feel and sound of the trackpad, the quite average keyboard, the feeling that the “premium” build quality is really just a nice “coat of paint” so to speak, the solidly average performance which is exceeded by devices 2.5 years old or matched by Chromebooks at half the price, the absence of a touchscreen upgrade, or the use of slower eMMC storage instead of a real M.2 SSD.

These are all valid points that probably make this more of a 4.5 star device than a true 5 stars. Worth buying? Heck yes! But perfect? Not so much.

And please, everyone, stop saying this is a $300 Chromebook that is nicer and faster than a $1000 MacBook or PC, because if you’ve really used those devices, you know it isn’t true… even if it sounds great in a review.

Great light chromebook I bought this for my son

I bought this chromebook for my son for 9th grade. It is very light and sleek-looking. He has been using it for about a month (he takes it to school everyday) and no complaints yet.