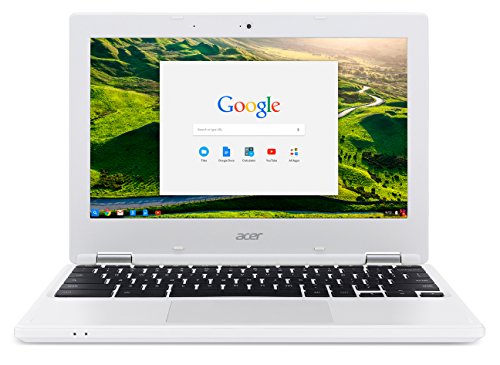 Amazon Review by Mark A. Baker

New to Chromebooks, but becoming a convert. Acer packs value into a small package

I want to give a brief background of where Im coming from and what I think about the new Acer Chromebook 11. In the past I have owned a Thinkpad laptop, a Dell notebook with a touchscreen and pen, and a couple of tower desktop computers. I have also owned two Android devices. These days I mostly use an Ipad for web browsing and apps, and a desktop for word processing, printing, Microsoft office needs, the occasional game, etc. I needed something at my work that was small and light and did not need a lot of computing power. I didnt want to spend much money. After hearing about Chromebooks for a while, I did as much research as I could and decided a Chromebook fit the bill. Amazon has a ton of Chromebooks, and I was about to buy the Chromebook 11 from last year, then found an article that was 1 day old saying that Acer had just released their new 2016 version of the 2 GB Chromebook 11. They explained that this one was built to be quite durable with an aluminum lid, and that it would feature an IPS screen, for only $179. They said a 4 GB version was bound to be released soon, and I wish it were available, but I figured 2 GB is adequate for my needs. I followed the link to Amazon, and found it here.

Build quality It is not as tightly put together as say a tablet or a high end laptop, but it feels very well made. The screen articulates well and the lid feels sturdy. The keyboard has a nice feel to it, much better than my Logitech for my iPad, and Id say just about as good as any laptop Ive used. It does have a strip of plastic between the track-pad and the space bard which is somewhat flimsy, though, and when I press down with moderate pressure, the whole middle of the keyboard flexes. Overall, though, I am impressed, especially for $179. Haven’t dropped it yet, but I think it would survive.

Ergonomics The keyboard feels like a full size; the volume and power buttons are in a good place, and the keyboard is comfortable to type on. The trackpad is larger than Im used to and even the fastest setting doesnt feel fast enough for me as I usually have to lift my finger off the trackpad to get from one side of the screen to the other. I like the no buttons choice of the trackpad though, and how the whole pad just clicks down if you feel you need a click. The SIZE and WEIGHT are incredible! I guess most chrome books are this way, but I am amazed. It feels lightweight but not cheap. The keys are not backlit. Webcam is stationary, and I doubt I will ever use this with Facetime on the ipad / iphone so simple and easy. Maybe they could do a version without this and drop another $20?

Display The display looks very bright, crisp; just what youd expect from an IPS screen. Now if I can only manage to stop poking it with my touch-screen trained fingers, I expect it to last. The fact that it is not a touch-screen makes this feel more like a laptop to me.

Color It looks good in white casing with black keys (kind of like a piano), but white would not be my first choice due to the inevitability to show dirt and oil after a while. Also the exterior it textured, which feels cool, but will probably attract more dirt that way.

Sound – Volume is pretty loud. Not sure the decibels, but is is louder than an laptop, phone, or tablet I’ve had. I was surprised to hear what sounded like stereo Left and Right sound coming from a video, when I looked on the bottom and noticed it had two speakers. Only realistic improvement would be if they could have mounted the speakers on the front instead of the bottom. I could imagine it getting muffled if on a blanket or other soft surface. But the sound exceeded my expectations for the price for sure.

Software having no background in Chrome OS, I find this software simple and easy to understand. You cant really screw it up. Somewhat disappointed with the app store. Does not seem like a lot of high quality apps to pick from, but that is coming from an apple user (and previously android). UPDATE: the “OK Google” feature which allows voice searches and commands was not working. I spent an hour on a help chat with google, and they couldn’t determine the problem, but finally asked me to “Powerwash” the machine, essentially wiping it and returning it back to factory state. It took about 2 minutes to powerwash and set it up again, and the “OK Google” feature miraculously worked again. I have had no other OS issues.

Speed The computer starts almost as instantly as a phone. Clicking on anything gives no lag. It is snappy, and I think it will stay that way. Youtube streams beautifully. Webpages load fast. If they had had the 4 GB version, I would have considered it, but 2 GB is not too slow for me right now.

Value Cant believe it was only $179. Great job Acer, and great job Amazon for getting it to me in a day and a half with Prime.
I will make sure to update as I use it more, and if my opinion changes.

I love the Acer Chromebook! It is very fast, does everything I need, holds battery great! Light and perfect...love the white as well!

I thought this notebook was very inexpensive compared to other laptops I had looked at. My daughter had bought this same Chromebook at Christmas time & gave several away for gifts & kept one for herself. & she told me how much she enjoyed it. Although I was use to using an Apple computer I love the portability of this Chromebook & love how small & easy to use it is. I keep it next my chair in the living room & pick it up anytime I want to search for something, I would recommend to anyone who enjoys just searching online.