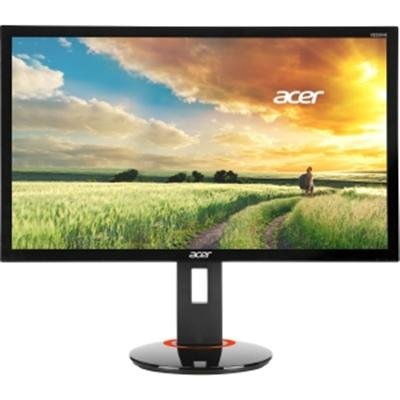 Amazing monitor until it malfunctions and Acer refuses to fix the issue. Avoid Acer

TL;DR: Acer refuses to repair my monitor with horrible ghosting issues but insists that I keep sending it in for repair. No other options available. Amazon refunds. Avoid Acer unless you like terrible customer service.

I purchased this monitor back in November and absolutely loved it. It was beautifully crisp and smooth. Unfortunately, after about 2 months the monitor started to suffer from some terrible ghosting and motion blur. This was not a minor issue, as you can see from the photo I have attached. After going through a couple of weeks of troubleshooting I came to the conclusion that the monitor was the cause of the issues. I changed out every variable in the system (included video cards, display port cables and every possible software configuration/driver) that could be at fault and the issue did not exist on my other monitor.

I contacted Acer and they told me that I would have to send my monitor in for repair (7-10 business days to repair it). Initially, the support tech told me that I would have to pay for shipping to send the monitor in to have it repaired. Acer reluctantly agreed to pay for the shipping both ways and I sent the monitor off for repair. According to the case # Acer gave me my monitor was “under repair” for the better part of 5 days. I received it back after 15 days and open the box to find that Acer hadn’t repaired my monitor. Instead, they “tested the monitor for 18 hours and found no issue.” This was the first thing that Acer did that upset me. I send them a monitor to have it repaired and they fail to find the issue. That’s fine, but instead of contacting me and allowing me to assist them in replicating the problem they just close the ticket box it up and send it back to me without doing anything. I set the monitor back up and still suffer the same issue. It was immediately noticeable.

I contact Acer again and tell them what has happened and they kindly tell me to send the monitor back in for repair. I inform them that I am afraid of sending my monitor back in and having it returned to me in the same manor as before. They tell me that the only thing they can do is open another repair ticket. At this point they tell me I have to contact level 2 support for assistance. The next day I contact level 2 and tell them the same stuff I told the last person and they give me the same reply. I tried to get them to help me diagnose the problem (since there’s nothing wrong with the monitor according to them), and they told me to try a different cable, check my graphics card and update my drivers. Acer’s tech support is more of just a “let me fill out a repair ticket” support.

At this point, I think I am being completely reasonable. How many times do they expect me to ship the monitor and let them have it for 2 weeks before getting it back without them even attempting to repair it? I told them that I was not interested in sending it back for repair and requested that I receive a replacement, refurbished monitor. According to Acer, the monitor that I have is functioning perfectly so I’m just exchanging one working monitor for another working monitor. Maybe I’m asking for too much of Acer but I just want a monitor that works properly, nothing else. The kind lady from Acer replied with, “I can’t do that but I can open a repair ticket.” I’ve been without a properly functioning monitor for around 5 weeks at this point. I told her that I was not interested and that I would be reaching out to Amazon to receive a refund.

Luckily for me, Amazon heard my side and refunded my money, despite being beyond the 60 day return period. I will NEVER purchase another Acer product. I have never encountered customer service that was less helpful or accommodating. Dealing with them was like pulling teeth. I’ll gladly take my refund and purchase the ROG Swift. Kudos to Amazon for have exceptional customer service and taking care of customers even when they don’t have to. I will gladly continue to buy from Amazon for this reason.