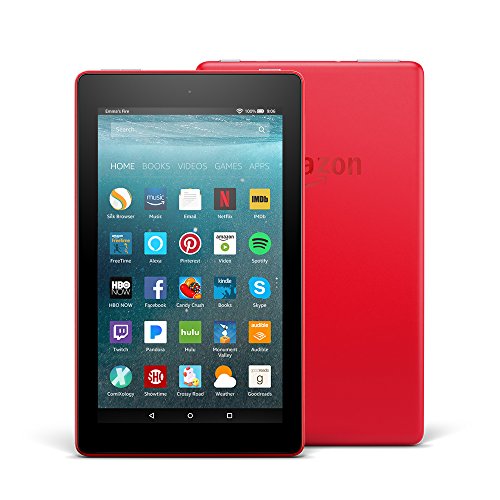 Amazon Review by Phil (not) in Magnolia

Amazon's two Bargain Fire Tablets How good is the 7" model and how do they Compare? (And note sound quality limitations)

Amazon has just updated their bargain priced Fire tablets. While these latest models are only slightly better than the preceding generation, I believe that they still represent the absolute best value tablet on the market. Its still hard for me to adjust to the fact that a tablet device can now be purchased for just fifty bucks, and its such a good all-around performer (for the most part)!

I purchased both the 7" and 8" Fire models because I wanted to see how they compared, and I was curious how they performed. They are both shown in the video attached to this review. I will focus here on the 7" model, to try to help the potential buyer decide whether or not the more expensive 8" Fire tablet is worth the extra money (and if the 7" model is worth purchasing on its own merits).

I’ve given this 7" model a 4-star rating after further consideration and largely because of the very mediocre quality sound output (see detailed comments below). It is still a terrific bargain at the price, but I do want to be clear that it is not ideal for all uses.

The display is the most obvious difference not only size, but the slightly greater display content and resolution. At least that is what the Amazon specs suggest, but to my eyes they are both pretty much the same. I did find that the 7" model seemed to have a slightly brighter display, and the ‘whiteness’ of the display also seemed to be better.

The other difference I wanted to evaluate was the sound quality, since the 7" model has only a single speaker and the 8" model has two (stereo) speakers with Dolby sound processing. For anyone using this tablet for watching videos or listening to music, I thought that would be an important difference.

What I found, as also mentioned elsewhere in this review and with respect to the sound quality, was that the limited volume ability of the built-in speakers makes ear pods or headphones or the use of an external speaker almost mandatory. If those considerations are acceptable, then the higher price of the 8" model is probably well worthwhile for users who will use the table very much to listen to music or videos.

For reading Kindle books or those who prefer the smaller and lighter size, the 7 model is just great (either model is fine, really).

By comparison, the latest small iPad mini has a 7.0 display and is roughly between the 7 and 8 Fire tablets in size (width and height), quite a bit thinner, and about the same weight as the 7 Fire. Its considerably more powerful and has 128 GB storage standard, but think about it you can purchase eight 7 Fire tablets for the price of a single iPad mini today! That is really a striking difference.

These two models are the 7th generation Amazon Fire tablet the first generation was introduced in November, 2011 as the Kindle Fire, offering the same screen size and resolution but a considerably less powerful processor, and selling for $199. Along the way theyve offered models of various sizes and specifications, and for a short time (generations 3 and 4) their Fire models included the more sophisticated (and expensive) Fire HDX model that may have been intended to be a more direct competitor to Apples iPad.

Then, in September 2015, Amazon introduced the $49.99 Fire 7, and since that time it seems that theyve been happy to offer these bargain priced tablets that do everything that most people really need on a day-to-day basis. They make great Kids tablets, too, particularly the Kids Edition models that come with the more protective case and 2-year replacement guarantee, just in case your kid drops it in the, ah, swimming pool or some such!

Both Fire models have a 2 MP rear-facing ‘HD’ camera, and a ‘VGA’ front-facing 0.3 MP camera. These are very mediocre cameras compared to just about any smart phone or tablet currently available and anyone wanting to take photos or videos with their tablet is not going to be satisfied with the quality that can be obtained from these Fire models, but they do suffice if all you want is to take a photo to make a visual note of something for future reference.

Both fire models include a 5W wall charger and a VERY SHORT USB cable (just over 3 ft long).

As with pretty much all Amazon Fire and Kindle models these days, you can purchase either of these tablets either with or without special offers. The $15 difference in price eliminates the ads that show when the screen is locked (but disappear when unlocked).

For anyone who wants a smaller and lighter weight tablet, these Fire models have become the logical choice. The prices are now so low that they can be a casual purchase for many people, not quite disposable but something easy to pass on when the next new model comes out.

I will continue to add more details here as I use these tablets more and have thoughts and comments to share.

I am so glad I bought the new 2017 Kindle Fire. This is my 2nd Fire, and 4th Kindle. I primarily use it to read / listen to books, 5% for games , apps, and video. The new features include: 1) The "About a Book" feature that is seen in the App is now on the Kindle. This is so great to have the summary available within the book and no longer needing to reference it in the Kindle Store. This is huge to me since I frequently pre-order books and don't remember them when they are finally released months later. And the summary is no longer tethered to WiFi availability. 2) The book sync's to most recent place read, not furthest place read (as seen in the 5th Gen.). This is great if you re-read books, it is no longer trying to put you at the end of the book. These were 2 things that I really wanted to them to put on the Kindle devices and they did it. So happy. Yes, it still has text-to-speech. You have to turn it on in the settings, but it is there. Yes, it still has the black screen with the light font. It is more gray than white so I like it even better. Yes, it still has bluetooth. I have paired it to my wireless headphones and it is great. The size is significantly smaller than the 5th gen. I can palm the entire device and I couldn't with the old version. The screen is the same 7" size. The new case is Great! I love that they finally built in the portrait view stand.It is so slim and easy to hold and carry. I did not need to go find an after market case that ends up being bulky. My one negative is the speaker is quieter than the old version. I used to be able to just listen to it from the passenger seat, but now I have to hook it to the car speakers. I just love this device. What an improvement in functionality for reading.