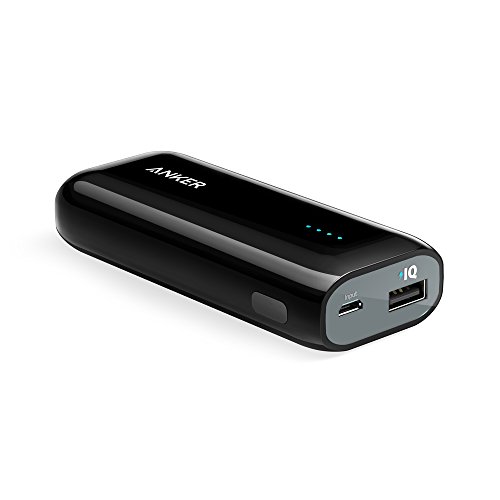 The perfect battery for your purse, pocket or backpack with an IQ port, a feature that you need!

This battery pack is ideal for your purse, pocket or backpack and it is one of the most portable batteries that I have tested. It had good test results. This is an exceptional charger with a feature that everyone needs. The feature is PowerIQ charging technology for the charging port on this battery charger. That means that you can plug in any type of device and this smart port will set the charging current to match the maximum charging rate that your device can safely handle. The port is rated at 5 VDC and up to 2 Amps but in my testing I was able to charge and Apple iPad Air at 2.1 amps.

Many people don’t realize that device manufacturers play games by wiring their devices and cables differently so that a charger that is designed to charge an Android device will not quickly charge an Apple device. Manufacturers like Apple, Samsung, Android devices and Chinese smart devices have different circuitry in them and if the charger doesn’t match their circuitry they can charge at a much slower rate. The IQ port doesn’t care what type of device you plug into it because it adapts its charging rate to match what the device wants by sensing what type of device is plugged into it. I was so impressed that I put together a video of the unit and the test results for your review.

The construction of this battery pack is simply beautiful. The exterior shell is glossy black. The battery weighs in at 4.23 ounces. The battery pack has one smart IQ output port that output 5 VDC at variable current to meet the charging requirements of the device you have plugged into it. It is called a Smart Port or an IQ port. It uses a chip to help select the proper current to allow the maximum safe charging current for the fastest device charging. The port can output as much as 2 amps but the battery pack in my testing output up to 2.1 Amps while charging an Apple iPad Air.

This battery pack has enough power to charge an iPhone 5S 217%. To start your devices charging connect them with the proper cable. (You will probably have to use your own charging cable that came with your device) and charging starts after you press the on button on the side of the battery. The charging will stop automatically when your device is fully charged or the battery pack is depleted.

The battery pack has 4 blue LEDs on it and when it is charging they work like this:

The Lithium battery can be recharged over 500 times during its life cycle. It comes with an 18 month warranty. It is recommended to charge the battery at 1 Amp and 5 VDC. It will take 5 hours to charge the battery at that charging rate. You can use your USB 2.0 port of your computer it takes 10 hours at Amp input. You can even use an AC powered USB wall charger or a USB car charger and using up to 2 amps will not hurt the battery.

The battery pack does have a power on switch to turn on the charging cycle for your device or to allow you to check the battery’s remaining power charge. .

Items in the box:

Summary of all items charged:

As you can see the Anker 5200 mAh will not fully charge a totally dead iPad 3 or 4 because it contains only 5200 mAh of capacity. That battery is ideal for recharging your smart phone or smaller smart tablet.

You have to consider the losses in the charging circuits of both the battery pack and the device you are charging so this result is outstanding! When using an external battery you have to allow approximately 30 % of the battery capacity will be lost to heat, voltage conversion, powering the batteries electronics and the electronics of your electronics device’s charging circuits. In addition you have to consider that your device is not truly off like a cell phone is still connected to the WIFI and phone networks and probably receiving emails, etc. This is one of the most powerful rechargeable battery packs I have tested.

Real world examples of charging capability with this battery pack:

I was supplied a sample for test and evaluation. A review was not promised to the supplier in exchange for the sample but I stated that if I provided a review that it would be fair and honest.

A tiny pack of power in your pocket

I own lots of Anker products, from Bluetooth headphones to their new Vacuum Cleaner, but mostly I have batteries. Lots and lots of batteries. Large and small, each and every one does a terrific job. So when the fine folks at Anker asked me to review the Anker E1, I jumped at the chance. My review is fair and unbiased. I mean, I've already got the battery, why not tell the absolute truth! The Anker E1 is small - I mean it's like 2/3 of a Three Musketeers candy bar! As a result, its easy to carry and use. It comes with one USB IQ port (IQ means it detects and adjusts to the power needs of the connected device) and the micro USB for input charging. I ran my Samsung tablet down to 4% battery, plugged in the E1, and it charged it up to 85% in 1 hour 45 minutes. It recharges quickly ( I didn't time it, sorry!) Thanks Anker for another terrific battery! This little jewel is going in my backpack, and I'll get another one for my gym bag to recharge my iPod and Bluetooth Headphones!