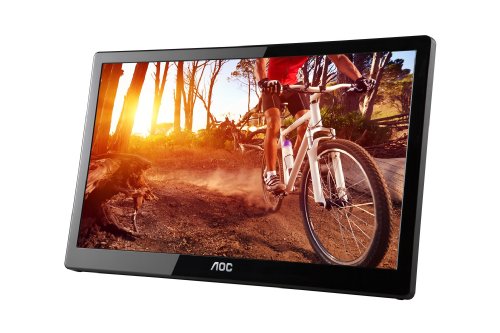 I've been keeping my eye on USB displays for a while now, and when I saw this one was going to be released soon I couldn't wait to get my hands on it. I work the majority of my day staring at four displays split between two systems, a Win-based one for work, and a Mac based one for photography/research/etc. Occasionally I have to be mobile, and once you're used to being able to organize your open windows on multiple displays, working in one display can be a bit constraining.

This display works great for both systems (Mac drivers not included, but available from DisplayLink site). On a Windows system it automatically detects rotation, on the Mac, it had to be set manually, but for me this is a non issue as I don’t rotate my display often. The glossy display is a minor drawback, you might need to adjust the angle until you get rid of unseemly reflections, but the viewing angle is fairly forgiving.

Reviews on the former device noted lack of a protective sleeve for transport and storage. This version came with a fabric/neoprene sleeve that fits perfectly, even with the cable tucked into the arm-stand cavity. Which bring up another complaint about the former model, the arm-stand is no longer a solid wedge, it is now a loop which does not interfere with the cable or block the USB3.0 port when closed. The resolution hasn’t changed from the former release, but even with the awkward ratio, I find it more than sufficient for a web browser, text editor, or an array of IM windows. and with Auto rotation on Windows, it will probably serve fine for PDF/Doc viewing as well.

The device comes with a USB cable that has a power pigtail on it, however, I did not need the pigtail for either my USB hub (which is powered by my Mac Book Pro) or plugging directly into my Win laptop. While my USB Hub is USB3.0 capable, neither the Windows nor the Mac Book are USB3.0 devices, so for those wondering if it was a showstopper, fear not, USB2.0 is sufficient to run this display.

I’m incredibly happy with this and am relieved to know that on those occasions where I have to work from a hotel room, or other office environment I won’t have to go scrounging around for a second display or cramming all my windows into one display.

This product would have gotten 5 stars if it had better out-of-the-box support for Mac users. Finding drivers was not intuitive, I went to AOC’s site and noted the e1659Fwu did not have Mac drivers listed. I decided to try the e1649Fwu drivers only to realize their Mac Drivers were hosted directly by DisplayLink, which means the drivers are not specific to device itself, which is good news for Mac users. I also would have liked it if auto-rotate were supported in the Mac, but that’s something I can ask DisplayLink about.