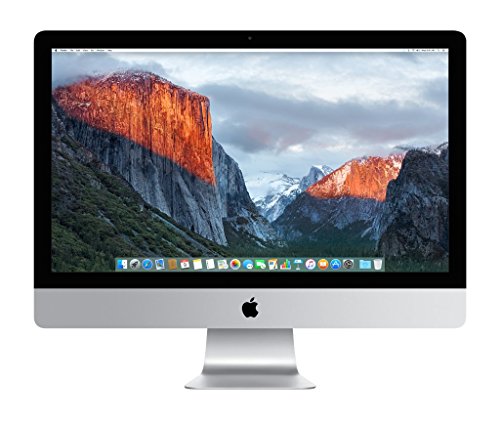 The Best Desktop Computer. Ever.

When Apple introduced the iMac with Retina 5K in Late 2014, it was groundbreaking and it stood alone as the most impressive desktop computer in the world. A year has passed since then, and it still stands alone.

When it came out, a lot of people felt it was too expensive, but as it stands a year later high quality 4K monitors still cost between $1000 and $2000 or more, just for the monitor. For example, Dell’s 5K monitor is $1600 by itself. Dell Ultra HD 5K Monitor UP2715K 27-Inch Screen LED-Lit Monitor. This means that if you bought a Dell tower PC with similar specifications, it would cost far more than the 5K iMac, and it would be stuck running Windows.

The price of 4K monitors are finally dropping, but 5K has 67% more pixels and when it comes to editing photos and videos, that extra space is a welcome luxury. We’re talking about a screen that can show a 14.7 Megapixel photo, without zooming. That’s simply amazing.

The other thing to keep in mind is that because the 5K monitor is built-in, it has direct access to the graphics hardware. Using a cable creates a bottleneck because HDMI specs weren’t designed with that kind of resolution in mind. Another benefit of the built-in display is that you know that it will work. If you bought a 5K monitor and tried to plug it into any old PC, you’re going to need an expensive graphics card and a good CPU to keep up with it.

I can edit and playback 4K video just as seamless as 1080. That’s pretty amazing.

Another major benefit is Thunderbolt 2, which doubles the speed of the previous generations. It has two Thunderbolt 2 ports, and because the monitor is built-in, you won’t need to use either to connect the monitor.

PLEASE NOTE: Most Apple Retail stores and Amazon are still only selling the ENTRY LEVEL configuration. To me, that’s like going into the Chevy dealership and to buy the Camaro, but finding out that if you spend just a little bit more, they’ll ship you a Corvette.

As far as I’m concerned, the price difference for upgrades is so small, that just about everyone who is in the market for this system should upgrade to the 4.0 Ghz i7 and the AMD Radeon R9 M395X with 4GB of GDDR5 memory… that configuration cranks out 3.7 Teraflops of graphics power. That’s about as fast as a Mac Pro.

In my case, I also upgraded to 512 GB Flash Storage, because speed is more important to me than storage. The stock configurations come with Fusion Drives, which is a mixture of 128GB of flash storage with a conventional hard drive. I’m not a fan of conventional drives… I like the speed, silence and durability of solid state drives.

Back to Mac after 20 years

After a series of incredibly frustrating hardware and software issues with HP and Dell machines and Windows 10, in somewhat of a fit of passion, I pulled the trigger on this beautiful machine. It's my first Mac since a Powerbook 165c I owned in the early 1990s (and which cost about twice as much as this at the time). I un-boxed the iMac, plugged it in, and it worked. I set up an account for my wife and it seamlessly integrated into the Apple ecosystem of her iPhone and iPad. No problem installing one of our 5 MS Office 365 Home licenses on it (it turns out the 5 seats can be a mix of Win and Mac machines). The 5K screen is almost as sharp as looking out a window. The built in speakers sound better than I expected given the shallow body of the machine. I had played with the non-Fusion drive model before this and realized the small price difference was worth the extra bit of performance. There are some things to get used to in transitioning back from Windows, but honestly with all there is to learn with the changes in Win10 anyway, I don't consider it a big deal. And I haven't completely escaped glitches - the Mac has still frozen up a couple times in the first month of owning it forcing a hard reboot. All the USB ports are on the back which makes them a bit awkward to use. The giant screen is not touch enabled. Bottom line: a Windows all-in-one with most of these specs plus a touch screen may cost half as much as the iMac. However, the stability of the system is worth a lot too - much less time spent acting as family system administrator trying to troubleshoot "now what's wrong" with the PC. The unequaled 5K screen is a differentiator if that's important to you. And if you are an iPhone user, don't underestimate the value of running a "all Apple" technology and having messages, photos, even calls transition from device to device as you like. I didn't realize what we were missing until I saw it in action.