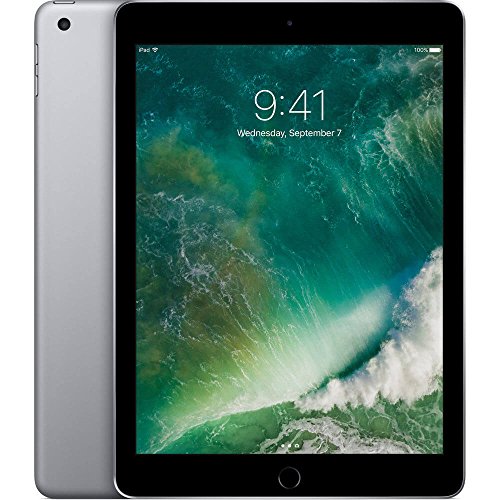 An iPad for doing all the things you love

Apple recently unveiled the 2017 iPad at an affordable price of $329. Compared to the original iPad price of $499, this seems to be a steal. But is this worth it?

Design: If you’ve ever held an iPad, you know the design. It is lightweight, with rounded edges, and will fit in your hand like a small magazine. Just some numbers here, the 2017 iPad is slightly thicker than the iPad Air 2 (you won’t notice the difference when using it). It has a gorgeous display, though, if you try hard enough, you’ll notice that the display feels like it is sitting behind a sheet of glass. This is because it is not laminated, which the iPad Air 2 and iPad Pros have. Will this disturb your viewing experience? Highly unlikely. There are 2 speakers on the bottom, and you get the home button with the integrated fingerprint sensor. Overall, the design is very similar to the first iPad Air that came out a couple of years ago.

Function: While it has the body of an older generation iPad, the computing power inside is much faster. The processor that drives this iPad is an A9 chip, and this is faster than the A8x that comes in the iPad Air 2. It has a 64-bit architecture, which is nerd-speak for “future proof” (Apple’s newer iOS will mainly focus on 64 bit processors, making older iPads more obsolete since many 3rd party apps will no longer be supported). Watching movies, reading books, viewing webpages will feel like a breeze.

Who is this for: Those who 1) never had an iPad before, or 2) have an iPad 1-4 and want to upgrade, or 3) don’t plan on using this to replace their laptop (it can be done, but the OS is not there yet), or 4) students who want a way to digitize their books on the cheap (while $329 is by no means cheap, if you look at the long term value of this iPad, it is much better than the Android competitors). If you have an iPad Air or Air 2 or iPad Pro 9.7, there is absolutely no need to upgrade.

Competition: At this price range, for the performance, there is not that much competition. You might go for one of the Samsung Galaxy A or E tablet series, which are usually around $200 range. But those will not last more than 1-2 years and are much slower to begin with. The other piece of this is the app store. Android is almost on par with Apple now, but the Apple App Store still gets the newest apps and the most attention from developers.

Final thoughts: The 2017 iPad is great for doing the things that bigger tablets are good at: reading, watching, browsing. This is not meant to be a workhorse, not because it’s not powerful but because the iOS lacks a real file explorer and mouse input. If you intend on just sending emails as part of your workflow, then this should work (as long as you don’t need to have too many attachments). Customers have come to love the iPad because it is so good at doing the few things that people want: reading, watching, browsing-- media consumption. It has a long battery life and a gorgeous screen. The only reason why I deducted 1 star is because of the price. $329 is a great price on paper for an iPad because Apple has conditioned us to think that an iPad should be at least $499 (or $399 for the iPad 4 last year). However, when you realize that this is a thicker iPad (with no significant improvements in the battery life dept) with older display technology (non-laminated screen), the price seems to be a tad on the high side. Apple is a master at supply chain and manufacturing, and using older technology and more forgiving designs should lead to less manufacturing cost, which further maximize the profit margins a bit. Given that many retailers cleared their iPad Air 2 inventories at $280-299 over the past few months, I believe the new iPad 2017 should’ve started at $299 instead. $29 may not seem like much, but a lot of people love Apple’s own accessories, and those certainly have also increased in price over the past two years. This is probably a moot point. Overall, if you get this iPad, I don’t think you’ll be disappointed.

Feel free to ask me any questions that you may have.

Nice upgrade from an iPad Air

I upgraded from an iPad Air 1 over to this 2017 iPad. Immediately I notice almost no difference in form factor, weight or screen quality and that's because they are practically identical tablets. This 2017 iPad removes the side mute switch, and the rear camera is about 1/8" off compared to the Air so Air cases will not fit perfectly (I modified my old one with an exacto knife.)

Speed wise it is fast, but I wouldn’t say it’s noticeably faster than the Air 1. Some apps load more quickly and some games that stuttered before now play more smoothly. The biggest difference I notice is using Safari and switching tabs which is much more smoother now. You can also enable Split screen view which wasn’t allowed on the Air 1. Battery life is almost identical from the Air 1 which is very good. WiFi is also upgraded to support AC specs. Doubling the storage space for half the price of the Air 1 is fantastic as well.

So overall this iPad packs a lot of upgrades if you are coming from an old iPad Air 1 or previous. If you have a Pro or Air 2 I would probably hold off as you might see this as a downgrade since the screen is not as nice as those models. I’m very pleased with iPad and the great price it is being offered at.

Plenty of space & power at a great price

Replaced my iPad gen 4 model with this new model, mostly because I wanted more storage space for my apps, games, photos, videos, etc. 128gb is the way to go...plenty of space and room to do it all! ... nad the A9 chip in this puppy races with fast responses to any demands...I am also getting used to and loving the new fingerprint Touch ID system, but, it's faster than typing in your passcode. Light weight and long battery life. I just need to find a great case and screen protectors. Very pleased with my purchase.

@nolie I recommend to buy