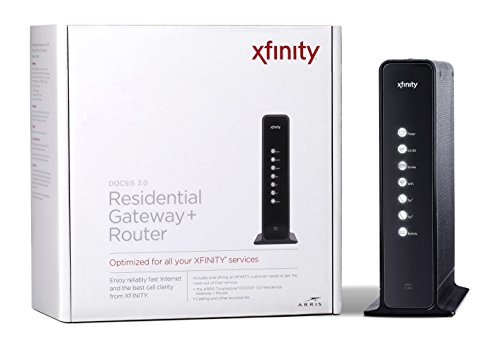 This gateway is one of Comcast's current mainstream models. It features a Docsis 3 modem, an eMTA for phone service, and a wireless router.

Note: This model is also a model that Comcast currently rents out. Avoid purchasing any used units as you may be purchasing an un-returned rental that you won’t be able to activate. Only purchase this directly from Amazon and in new condition to ensure that you’re getting an unactivated product. Make sure you keep any documents relating to this purchase in case Comcast tries to begin charging for rental fees claiming that this gateway is theirs and you are renting it from them. You must provide proof that it’s yours to remove the rental fee if they try to claim it’s theirs. This is a common occurrence with Comcast and it’ll be an even greater occurrence considering it’s a primary rental gateway of theirs.

The modem part alone isn’t that bad. I can receive the advertised speeds with this modem(but it depends on how congested your area is).
The rest of it is sort of the problem.

One of the main downfalls for this device is its range. It’s probably one of the worst range devices any ISP offers. On top of its range being incredibly short, I was also unable to connect to any websites with a low end 3 bar signal because this gateway was too weak to respond back to my device.

You can put this device into what’s called “bridge mode” which shuts off its router/wireless functions, but it left me with many connectivity issues. When it was in bridge mode I could not connect to a few services. Some services would make this gateway just not want to respond to anything for a few minutes at a time(even though the connection was still stable). Taking it out of bridge mode made it work properly again, but it defeats the purpose.

This gateway will also broadcast an open “xfinitywifi” network in most states. This will allow anyone nearby to use your gateway(power/split connection) to connect to Comcast. If you’re in an area with a lot of cars driving by, your wireless will only slow even more to a crawl as many phones try to automatically connect to it as they drive by.

You can turn off this signal, but it’s usually hard to get the setting to stick. Many people have it turning back on randomly or after a firmware update(which happens quite often with these gateways).

By purchasing this gateway, you’re pratically giving Comcast yet another free hotspot they can use to charge people to connect to with “xfinitywifi” as any guest/passerbyer must either login with their Comcast account or pay to access this open network.

In the end, the technology on this device is somewhat outdated already. It has a 8x4 channel Docsis modem. 16x4 and now 24x4 channel modems are going to become incredibly common soon. The wireless only features up to 270 Mbps using a 2x2 antenna system while being single band only. Many newer devices are featuring 3x3 systems and are dual band. With such a steep price, it will take months for it to be paid off in terms of the cost of the rental. By the time it’s paid off in comparison to rental fees, it’ll already be quite outdated. Only purchase this if you feel like you’re going to use this for many years and are ok with being behind in technology. If you do purchase it, like always, make sure you only use wireless channels 1,6, or 11. Any other channel is going to make your performance suffer even more and it’ll eventually lead to your network getting crushed by others.

If you really want to own your device and need a replacement for your voice service, get the TM822 instead.

Update: Since my original review post, Comcast has been pushing newer firmware that even if you turn on “bridge mode”, Comcast still leaves the wireless radio on which continues to allow xfinitywifi and a hidden network to broadcast. Same goes for if you disable wireless on the gateway. In other words, even if you turn on bridge mode, disable wireless, and disable xfinitywifi, your TG862’s wireless radio will continue to be up and running broadcasting a hidden ssid and it’s technically never shut off.

Update 2: In my review I mentioned to get the TM822 over this. Since then, Comcast has been making it harder to activate that modem for customers who buy it. If you do get one of them instead, please be prepared to deal with a little trouble getting it activated.

100% compatible with Comcast. Unhook old modem/router. Hook up the TG862G/CT (Note that the last two letters in the model number, CT, identify it as an approved Comcast modem). Computer will recognize modem after five minutes or so. Comcast log in will appear. You will need your account number. Follow directions. Four easy steps. Takes about 15 minutes for proper downloads. To access internet with laptops, smart phones, and tablets, click on the network name now appearing in your wireless device, (provided on a large label on side of modem). Then enter the unique password pre-installed and listed on the same label. You will be good to go. If you had a separate router before, that was not a great match, internet access may have been interrupted while using your home phone. This problem goes away now. Return your Comcast modem, and enjoy a $10 savings each month. Modem pays for itself in 20 months. I had my last one for over ten years, which means I paid a boat load of money for it. Good luck.