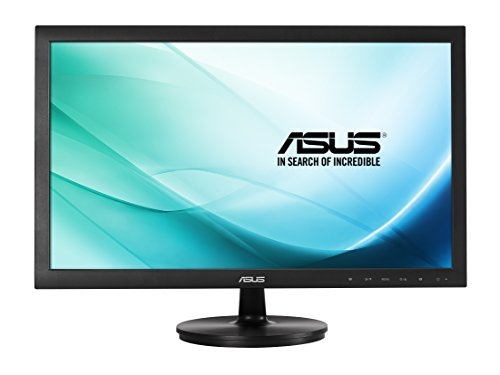 This is a wonderful non-glossy monitor. GET IT!

I've been holding off on this, because I wanted to spend some time with it to give an experienced review. I'm just dumping a lot of details out there for you to absorb and make your own decision, but don't get me wrong, this is an AWESOME monitor for those of us that don't care for glossy screens. I didn't buy this for the size; I bought it for the LED backlight, 2ms response, 1920 resolution, and the high contrast ratio. It just happened to be the only size I could get with those requirements.

Sound
This monitor does not come with speakers, but does come with a headphone jack located next to the video ports in the rear. This headphone jack is, to my knowledge, fed purely through HDMI if your video card supports injection of audio along with the video it displays (My GTX 560 Ti supports this). There is no way to control the volume for this port via the monitor and you will need to rely up the volume control provided through your OS or headphone’s controls.

Display
My monitor arrived with 100% of the pixels working; not one single stuck or dead pixel. This was the first thing I checked for when I received it.
The 2ms response time is great. I don’t see any ghosting or other types of lag. I tested this with Transformers 2. During the scene where the Devastator comes together my 60Hz TV was so laggy it was hard to see all of the details; with this monitor I was able to see every intricate detail of the vehicles connecting together to form the Devastator. Now I want to upgrade my TV.
Compared to any other LCDs I have, this has very little color distortion based on different viewing angles. The only time colors show noticeable change is when looking from a higher viewing angle (not left, right, or below).
Sometimes, during a solid colored screen, I think I see minor light-bleed effect in some areas, but lately I haven’t. It’s very rare/negligible and not noticeable at all during use.
The screen itself is very bright, colors are vivid, and whites are white and not yellowed (it puts my 2008 MacBook to shame).
I have been satisfied with all the default color settings. It comes with six pre-programmed modes. I normally only use Game/Theater/Standard modes. Similar to shopping for TV’s in a store, once you switch to Standard you’ll think “Eww, that’s so bleached”, but once you walk away and come back it looks awesome again. The Theater mode is configured more for darker pictures.
Since it’s dynamic contrast, I noticed during testing that a screen of pure black is not as black as I’d like (because it has nothing to compare/adjust against), but once you pull up an actual picture with content or play a video blacks are dark black, whites are bright white, and it does very well at displaying the various levels of contrast in between.

Build
It’s pretty thin and seems well built. The base is very easy to take on and off for transport, but you may want to use a screwdriver if you’re OCD and the 1-2 degree of possible rotation from only hand-tightening annoys you. The screen sits level and doesn’t lean at all one way or the other. There is a indentation in the back, probably mainly for heat dissipation, that I’ve been using as a handle-grip for transporting to LAN parties. This seems to work rather well, even if it’s not intended to be used this way. The monitor itself stays really cool and I hardly notice any luke warm air coming from it even when I’m right up to it.

Other Thoughts
As much as people complain about the reflections of glossy screens, I don’t think the Aero/“ooh, shiny object” effect of the gloss will ever seem inferior to my non-glossy screen (remember that TV shopping effect?). At the same time I am glad to have a non-glossy screen and am really surprised at how well it handles the colors for being such. It’s both a pro and a con for me.
I have no issues viewing text on this screen. I had a laptop with a 15.5" LCD running at 1920x1280 and never (okay, rarely) had any issues reading small text, and I can tell you this 23" 1920x1080 screen is much easier to read, because… well… all 2+ million of those pixels are larger than on my 15". Sure, my dad may still complain about the font, but all-in-all if you have trouble reading small things get a display with a lower native resolution (else things typically get blurry when you lower from the native resolution) or attempt to utilize the operating system’s built-in scaling settings. The text itself displays nice and crisp, just how I like it.

*2014 Note: This was a 2011 review of the ASUS VS247H-P. It seems Amazon has since reused the listing and/or reviews to now be attributed to a newer model.

This monitor gives an excellent display. I recently purchased a new computer and shoped around for a monitor that would allow me to take advantage of the more advanced CPU and graphics capabilities. I feel that this monitor dos the job, you get a lot for the money.

I have only had the monitor for a few weeks now and I am still tweaking different features that the monitor has. The process of adapting to a new monitor could be made much easier if a more in depth user/set up manual had been included. The documentation included with the monitor are basically useless as far as explaining how to take advantage of the features this monitor has.

Yes I would recommend this monitor to others, but I would caution them that it would take some time and initiative on their part to be able to fully take advantage of the monitors features.

Great Monitor for the Price

This is one of the best TN panels monitors for the price. It won't give you the clean whites and contrast of an IPS panel but for half the price it is a great deal. PQ is excellent and menu options give adequate control over color gamut.