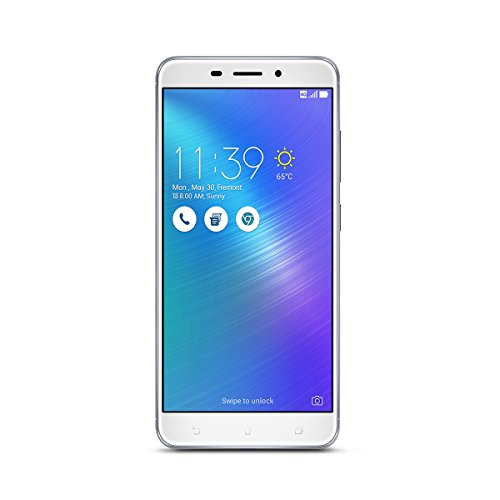 I purchased the USA warranty/spec version of the Zenfone 3 Laser ZC551KL as a replacement to an old Samsung Galaxy Note II and a Blu R1 HD that had a substandard camera. Basically, I wanted something no larger than the Note II, preferably a little smaller and thinner. I also preferred to keep the micro SD and micro SIM features so I can switch phones easily. Finally, I wanted a phone with at least a decent camera and Android 6, priced at $200 or less (off contract) so I can avoid lease fees and carrier surcharges. Most importantly, I wanted full AT&T USA LTE coverage, including band 17. This is one of very few phones that fit my requirements. Note that Amazon has combined all versions of the Zenfone 3 into the same review listings. This review is for the 5.5", 2GB/32GB Laser version with USA warranty.

Reasonably compact and slim for a 5.5" screen. At under $200, I don’t even need to buy a case that adds bulk. With only a screen protector, it’s very thin and fits nicely in a pocket and in my hand, a bit smaller than the Note II overall. If it breaks, it’s not so expensive to replace like a flagship phone would be. The case is aluminum alloy according to Asus, though it feels more like plastic.

Display. The screen is very bright at maximum settings, and colors seem fairly vivid. It only has full HD (1920x1080) but that’s still very reasonable for a midrange $200 phone. The viewing angles aren’t as good as some top-of-the-line phones, but you never even notice this unless your’re sharing a video on a tabletop or something like that. The auto-dim feature works well, and you can adjust the baseline brightness for use with the automatic sensor, too. You can disable automatic to make it quite visible even in sunlight.

Camera. So far, very good pictures and video. Very impressive for a midrange model. No issues focusing near or far, and no problems with choppy video like my R1 HD. My only complaint is that it won’t allow for smaller image sizes. Many times, for online publishing, I’d like to take 1920x1080 FHD images and not have to resize later. I’m sure a third party app would resolve this, so it’s not a big deal. It does have Sony imaging hardware and focusing is fast and accurate with short shutter delay, so I haven’t missed any photos so far due to blurriness or shutter lag. Included is one example with good daylight, plus one in a dark room using flash. This isn’t going to be a high end camera like on an iPhone, Galaxy or other flagship smartphone, but for the money, I’ve been impressed.

Full AT&T USA LTE compatibility. Amazon didn’t list LTE bands at the time of my purchase. The Asus North America website only listed specs for the Japanese spec phone, not the USA warranty version. Asus Global correctly lists the USA spec phone bands, and I confirmed these with Asus tech support: 1, 2, 3, 4, 5, 7, 8, 17, 28. I have personally confirmed bands 2, 4 and 17, with the latter perhaps being the most important one in areas that use it. Note that it appears to lack band 12, which is the T-Mobile equivalent of band 17, so I can’t comment on interoperability or compatibility for other networks. So far, I have had no issues with wi-fi or cellular data speeds on AT&T in the Chicago area. If you are on T-Mobile, the $149 Blue Life One X2 has similar specs and has band 12. PLEASE NOTE: Most international versions of the Zenfone 3 DO NOT have the most important LTE bands for either AT&T or T-Mobile. You must get the USA version for full LTE coverage on AT&T!

Fingerprint scanner. I haven’t had one on my previous phones. This is a great feature, not only for security, but also for ease of unlocking the phone. It works very fast, my home page appears in a fraction of a second every time. You can also use a pin or swipe if you wish. I appreciate the sensor on the back of the phone, so it’s very easy to unlock with one hand using your index finger.

Dedicated back/home/apps bottom buttons. I greatly prefer these to software buttons like on the Blu R1 HD.

Reasonable power. The Snapdragon 430, Adreno 505 and 2GB RAM seem much snappier than the R1 HD. I’ve had very few issues with performance so far, even after almost a month of use with all my apps installed. I don’t use my phone for gaming, so it might not be a great performer for intensive apps, but it works fine for browsing, email, Google apps and other typical apps. My only complaint is that Asus should have included 4GB of memory like in other global markets. I’ve had slowdowns when uploading media to Facebook that are resolved by clearing the memory with the Power & Boost android utility. I usually average 1.5GB of 1.8GB free, and I’ve made some efforts to prevent unnecessary stuff from loading. So even 3GB would have made this a 5-star rating.

Battery life. Seems fine for a modest day of use. I have no measurements, but it seems to be as good or better than my other phones. With brightness on automatic at the lowest base setting and airplane mode active, I used it constantly on a 3 hour plane trip and ended up with 90% remaining. I wish the battery was removable, but the case cannot be opened easily.

Quality. The build, fit, finish and appearance are very good for the price. Looks sharp. The buttons on the side have nice tactile feel and work well. Camera lens bulge is minimal. So far, no issues with excessive heat, though it does get a little warm with extended video streaming.

Android Marshmallow. Seems like a fairly clean interface and works nicely so far. No issues at all with reboots, crashes and only minor issues sometimes when writing messages in facebook, especially when uploading images or photos.

Works right away. Unlike my son’s Zenfone 2, this one picked up network settings automatically, so we didn’t have to deal with figuring out how to resolve issues with data and MMS operation. With Google backup and the Android Google “Set Up Nearby Device” utility, everything copied over with minimal hassle.

Micro SD card compatibility. I have over 4000 songs and various other files and data on my SD card. It’s nice to be able to simply move it over to a new phone and go. I’ve had no issues with playing music or finding files so far. I am generally using Amazon Music for local music files and the Sirius XM app.

Call quality. So far, so good. Plus, I get reception in my basement My Galaxy Note II also did, but the Blu R1 HD was hit or miss for calls and data.

Amazon. Great service as always. Offered free next day shipping for Prime in my area.

Updates and Support: Thanksgiving Day, Asus pushed a firmware update that caused all affected units to no longer recognize their SIM cards. The phones could not receive any cellular calls, texts or data. Despite numerous reports, they told owners there was no possibility to roll back the firmware and that phones must be sent in for RMA repairs. After 3 days they finally posted a firmware roll back on their website and forums that resolved the issue.

Memory. 2GB is really barely sufficient for a midrange phone. Global versions appear to have 4GB. This one should have had at least 3GB.

Color. Honestly, I wish it came in black, gray or blue. I have the silver, which is fine, and on the plus side, matches my Lenovo Yoga 900S notebook.

Bloatware. Reasonable amount of junk apps that I will never use, and cannot be easily uninstalled. I could do without ZenUI and almost all of these useless apps. Considering the marginal 2GB of memory, any stuff that can be removed so it is never loaded is a benefit.

The headphone volume isn’t as loud as I’d like. Call volume, speakerphone volume and bluetooth audio volume in my car all seem to be good, though.

This is not a flagship phone and it’s not even comparable to other Zenfone 3 models. Those all cost $400 to $800 off-contract and offer a lot more features. This is a midrange phone and a good one. I give it 4 stars for a $200 unlocked Android 6 phone with full AT&T LTE compatibility. The poor support and minimal 2GB of memory keeping it from a full 5-stars at this price. Many inexpensive phones do not include the all the essential AT&T bands, which may not be an issue in some areas, but will be in others. In particular, band 17 is absent on many budget models, but is included on the USA spec Zenfone 3 models. The display, camera and fingerprint sensor are standout features at this price point. The main competition right now in the USA seems to be the slightly smaller 5.2" Blu Life One X2, which has a similar feature set and is somewhat less expensive at $149. The $199 version as more RAM and storage and might be a good alternative. The Blu Vivo 5R and Moto G4 Play are also similar, with slightly less powerful processors and cameras.

Great mid-range phone to own

Overall, the quality is good even though Asus is relatively unknown for its smartphones. Photo quality is great. The phone offers many features on its camera to customize photos. To me, long battery life and faster charging are important. This phone meets both of my requirement. If you don't want to spend over $400, 300 or even 200 on a phone, this phone may be your consideration. I also have to say getting the accessories for this phone is kind of challenging. Anyhow, the hardware and software (if you don't mind the Zen UI apps and theme) works just fine.