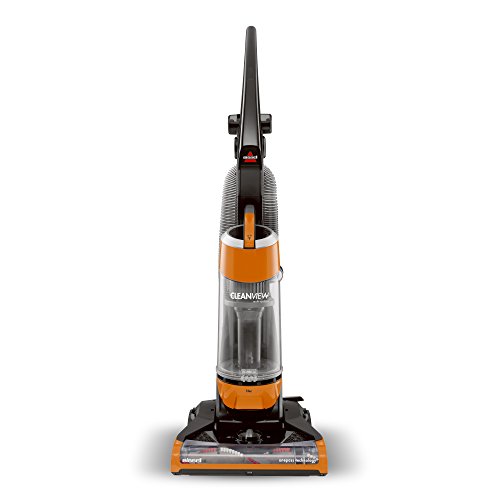 One of my jobs is to clean a large church, which includes vacuuming miles and miles of carpeting, as well as cleaning dust, bugs, dried flowers, and all kinds of dirt out of hard-to-reach places. The carpeting is a deep red color and the smallest piece of lint stands out in sharp contrast. I have used three other vacuums at the church: a shop vac, a Dyson DC33, and a Turbocat central vacuum. With each of those, I would have to go over and over the same stretch of carpeting in order to pick up the lint and other dirt. Each of those vacuums tended to chop up and spit out items I had vacuumed up, such as leaves or bits of paper. It has been maddening. Needless to say, the "OnePass" technology of this vacuum appealed to me.

Of the vacuums I’ve used, the Dyson DC33 is the one most similar to this Bissell vacuum. Both are bagless upright vacuums with clear canisters using a cyclonic system, and are a similar size. So let me compare the two.

First, the price. The Dyson DC33 sells for about $339.00 while the Bissell goes for $79.99. This Bissell vac looks and performs like a much more expensive vacuum.

The Bissell attachments are easier to use. An expandable hose can be pulled out and the attachments fitted on quickly and easily. The hose it a little tight when you first try to pull it out, but I think it will become easier with use. There are several attachments: the usual wand, a small brush, and the powerful Turbo-Brush tool which made short work of the cat hair on my couch. With the Dyson, you have to press a button, detach the “telescope reach wand” handle, then press another button to pull out the telescoping wand from within the handle. In fact, everything on the Dyson requires pressing a separate plastic button. It is a bit tricky to reattach the reach wand to the Dyson vacuum, which is a real time waste when you have to remove it over and over again for small jobs. It came with one brush, and all the other attachments have to be purchased separately, a big expense. My only complaint about using the Bissell attachments is that the hose is rather short and the wand does not expand very far. This would pose a problem at the church where I need to reach high stained glass windows and tall statues, but is probably fine for home use. The Bissell is MUCH lighter than the Dyson, which is terribly heavy and hurts the arms to use.

As to the “OnePass” feature, it works like a charm! I can’t say you never have to pass over the same stretch of carpeting, but it’s true about 90 percent of the time. I was literally stunned by the amount of dirt in the see-through canister after only a brief vacuuming. My previous home vacuum was obviously not doing its job!! This baby is powerful. A bit noisy, granted. And you have to bend down to reach the on-off switch. But you can literally feel it hungrily devouring the dust and dirt on your floors, stairs, and upholstery. Works great on bare floors too.

This is an excellent vacuum at a great price.

Based on reviews I decided to buy this Vacuum cleaner and I'm happy with this. It was hard to buy model 1330 because when you search for 1330, it will find 1331 and you don't know if they are same. If you search for 1331 it will say it's available but when receive product it is 1834 - so I've decided to buy it directly from the Bissell. I didn't imagine how dirty is carpet in rented flat until I used this vacuum. I believe this product is great. The one 'problem' with the vacuum is the high temperature of the engine - but maybe it's only my feeling and it's ok. I just keep the vacuum for a while turned of to be sure engine will cold.