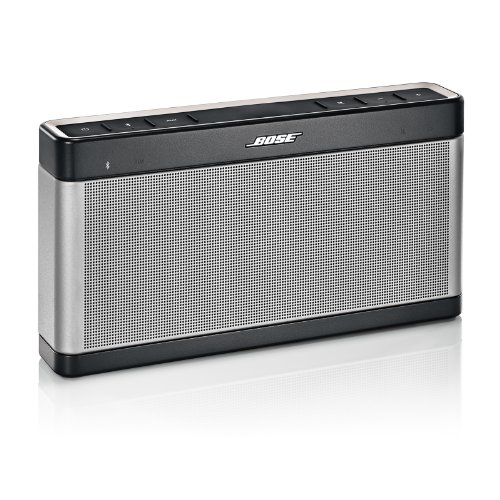 All is not perfect in Bose land however… Bose has still turned up its nose to aptX, NFC and handsfree. Why Bose, why? Bose still does not provide a remote control nor any controls on the speaker to play/pause music or to change tracks. Bose doesn’t even include an AUX-in cable… even the most lowly of Bluetooth Speakers include an AUX in cable.

The SoundLink III is sporting a new case design which is quite attractive and slightly larger in height and width than the older SoundLinks.

Bose did away with the nylon cover/stand. That takes away some protection for the speaker but Bose offers optional cases ($35.) The speaker comes with only a power adapter. It is 100-240V, 50/60Hz and has a folding, non-polarized plug. I like that the power adapter, when it’s plugged in to a standard wall outlet, doesn’t take up so much space to not allow you to use the other outlet.

Concerning the Volume control, many Bluetooth speakers will give you a little beep once you’ve reached maximum volume but the Bose does not. Also, there is no visual indication of any sort to let you know exactly where you are on the scale of loudness from zero to maximum. I usually just set the volume on the Bose to a somewhere less than the maximum and use my device to refine the volume.

Pairing to a bluetooth device is pretty easy. The SL3 will remember up to 6 pairings and always attempts to connect to the last paired device. If that device is not available it will attempt to pair to known device. If you attempt to add more than 6 devices, the SL3 will replace the least used connection with the new pairing.

On the left side are:
Bluetooth indicator
Aux indicator

On the right side are:
Mute indicator
Battery/charging indicator

On the rear of the speaker, from left to right:
Aux In
Micro USB Service port
Power input

The bottom of the speaker has rubber pads to help it not slide around. Whereas previous SoundLink speakers had an easily removable panel to access the battery, this does not have an obvious way to do that. Regarding the battery, the capacity is not specified but the original SoundLink & SoundLink II had a 12.4V, 1700mAh 19Wh capacity battery. Since the playtime of the SoundLink III has more than doubled, it must have a significantly larger battery than its predecessors. However Bose is pretty tight lipped about that.

I was so interested to know what the battery capacity was that I called Bose at their tech support number. The support tech told me the battery lasted 14 hours. When I explained that I wasn’t interested in knowing how long it lasted but rather what the mAh capacity of it was, he then told me if I used the speaker every day it would last 2 years. I explained that I thought that was fantastic but could he please tell me the mAh capacity of the battery. He finally said that he did not have that information in his knowledgebase. I asked him who I could speak to at Bose that might be able to tell me the answer to my question. He replied “I don’t really know.” I told him that if Bose couldn’t tell me what the capacity of the battery was, who could. Again he said he didn’t know.

I finally called Corporate and spoke to a supervisor who told me that the battery in the SoundLink and SoundLink was considered user replaceable but that the SL3 has had a major change and the battery is no longer considered user replaceable. (That helps to explain why there is no longer a user accessible battery compartment.) He went on to say that the new battery technology has led to a 40% greater battery life compared to the SL2. I asked him what happens if the battery needs to be replaced 2 or 3 years down the road. I was told that service pricing hasn’t yet been determined but to service the SL2 would cost $75 and that the SL3 service cost would probably be in the same ballpark. Something to consider I guess.

The sound from the SoundLink III keeps with the Bose tradition of emphasizing bass (some would say over-emphasizing) and using heavy DSP (digital signal processing) to sculpt the sound in such a way as to cause you to wonder how all this sound is coming out of such a small enclosure. There are 4 transducers behind the front grill and 2 passive radiators behind the back grill.

This speaker sounds best when you can place it near a wall to allow the 2 passive radiators on the back side to reflect the sound off the wall. This is one secret to the bass sound that Bose is known for. For optimum sound the speaker should be placed in near, but not against, a wall. You should not enclose the speaker in a small area otherwise the tonal quality of the speaker will be adversely affected. And when using the speaker outdoors, where no wall is present, expect the bass to be diminshed greatly. The speaker is capable of producing quite a high sound pressure level and can easily fill a large room with sound.

A few other speakers that are getting attention (August 2014) would be the Creative Sound Blaster Roar, the IK Multimedia iLoud 40W Portable Personal Speaker, and the Sony SRSX3 Portable NFC Bluetooth Wireless Speaker (Black). Lots of competetion in the mid to high end bluetooth speaker arena.

Bought this recently over soundlink mini 2..im glad... The music sounds just incredible in this.

Pricey but you get what you pay for

I bought the Bose Soundlink after being dissatisfied with lower priced Bluetooth speakers. Tried the Altec "The Jacket", JBL Clip, etc. They just didn't make for a good quality sound and the battery life was dismal on both.

I’ve owned a Bose Wave Radio II for years, and for a small box it puts out a ton of quality sound. So I compared every single Bluetooth speaker on display at the store and none of them could match the Bose for sound quality and volume.

The SoundLink III is built like a tank. It’s weight is an indication this is a quality piece of equipment. But the sound coming out of it is what makes it shine. Even when played loud, it doesn’t distort. The DSP also works well at low volumes producing full rich response.

The big winner is the battery life. I got about 12 hours of playing music, YouTube videos and NetFlix before the battery icon went red. Also, the speaker can be played while charging. Would have been nice for Bose to use a standard micro-USB cable, but the design of the circuit requires much higher voltage and current to charge the battery and operate the on board amplifier.

There is no microphone for phone calls. But then, if you’re buying this, it isn’t for making phone calls- it is meant for music. This is the one to get if you want to get a ton of decent sound out of a small box. It’s a keeper.