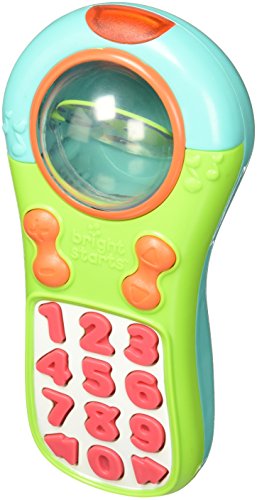 My baby (8 months) is crazy about our tv remotes, so before disaster happened I got her this toy. It was the only toy remote I found that was rated as safe for such a young baby. She was about 7 months when I got it. Instantly became her favorite toy! It took her a little while to learn to push the buttons, but even before she enjoyed holding it and touching it. I think she likes the bright colors. She loves the rolling ball at the tip! Also, the songs are actually enjoyable. Even after almost two months of her playing with this daily I haven't gotten annoyed by the music and sounds (same cannot be said of other toys). All this at a super-affordable price... what's not to love?

A great alternative to the tv remote

My son started to play with our television remotes and then we gave him this remote. He still likes ours, but he loves to play with "his own remote." He got this toy at about 5 months old and played with it when he went for the real remotes but they were taken away from him. Now he plays with this almost everyday. We have taken the purple attachment thing off of it and he chews on it as though it were a teether.

The buttons for the volume plays songs, the buttons for channel changing play sounds that are almost like they changed the channel to a certain type of show (baseball game, animal sounds, sci-fi sounds, a laugh track, etc). The numbers play all kinds of songs and they count up to 9. The 1-6 are separate from the 7-0.

It’s a cute toy that has allowed him to feel important enough to have his own remote.