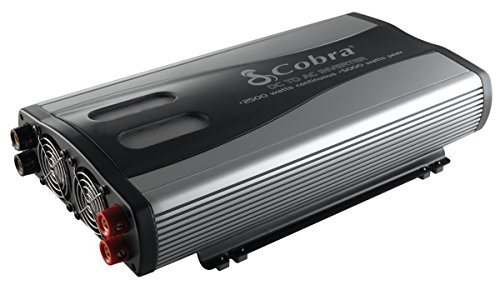 Good Inverter - Beware of those unfamiliar with Inverters

Beware of all those talking about failures of the inverter - one guy says that he returned his, because two 70Ah batteries couldn't power it to run a 1/2 horsepower motor.

Well…guys, there are a few things you need to know about inverters before buying a big one…which does NOT directly substitute for a generator! The little ones are WAY DIFFERENT than the big ones.

First off, at 2500-watts, you are pulling 200+ amps across the wire…so, unless you are hard-wired with some 4/0 solid-strand wire, you really need to go with DOUBLE 4-AWG strand wires…basically, buy TWO sets of 4-AWG jumper cables, and after you cut the ends off both, then run double-strand (both red AND black) of a complete set to EACH POST of the inverter…yes guys, that’s a LOT of wire…and due to heat, I wouldn’t run that more than 5-6 feet!

Now…batteries…let’s laugh at the guy trying to get 1600 watts of batteries to run a 2500 watt inverter…and consider what you REALLY NEED…for deep cycle batteries rated on the 20-Ah system, and rated at, say 500-Amps, then buy 6 of these and wire them in PARALLEL circuit to power the inverter. Yep…$600 in deep cycle batteries! Now, you have enough batteries to power the inverter for 2-6 hours, depending on loading, before you will need to recharge your 6-battery bank. Plan on a charger that can throw 50-100 amps into the charge…so your little $50 Schumacher charger is NOT going to charge this battery bank overnight! Try more like a $300 charger to charge them in 12-hours…or, if you want solar, good…you need to throw about 70-amps of charge into these for 12-hours solid…so that is $300-$500 in solar panels. Also note…batteries get weak after enough cycles…so pay attention to your charge circuit…and a charging circuit MINDER isn’t a bad idea, either!

How do I know this? Because these are all the big troubles encountered when I was a Director of Engineering for an RV Manufacturer…and when you get over 1500-Watts of inverter involved…you start playing by a whole new set of rules! It is MUCH CHEAPER to go with a 3000-watt generator, than to even CONSIDER getting a 2500-watt inverter.

This is a good inverter…but buying one this big and not knowing how to care for and maintain it, is like buying a big chemistry set and giving it without supervision to your mischievous 12-year old…it is NOT a good idea.

Purchased during Hurricane Sandy. Was delivered a a few days later, where eventually I hard wired it to my truck, and left it idling and locked. This unit was able to power the fridge, boiler, circulation pumps, tv, dvd, surround, and lots of lights in the house by back feeding into the house once the main circuit was off. Loved that it worked so well. Kept the wattage under 1KW, and it worked really well. nice.