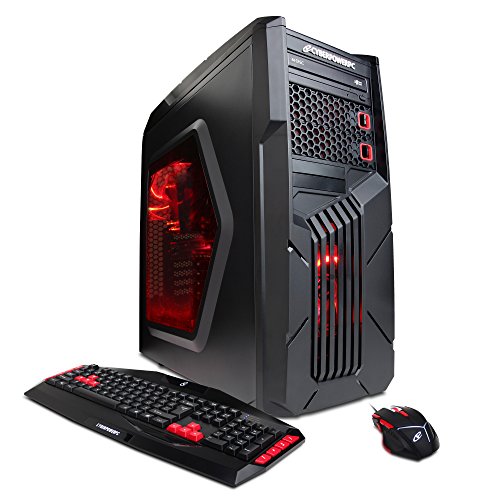 Amazon Review by Thomas A. Nowling

Let us start off by saying, I am usually very leery of buying pre-built PCs because, I never know on how the specific manufacturer handles everything. I would much rather do it myself but, I didn't have the time to build it this time. I should mention that, the last time that I built my own PC was in late 2004/early 2005 specifically for when Doom 3 came out.

With that being said, I was extremely pleased on how fast the PC arrived (for one) and two, the package was protected to a T. This particular model (which I am hoping has the complete specs listed above) has the following specs (which I am only giving a few out of all of them): 8GB RAM, 1TB HDD, an AMD FX-6300 Six-Core Processor @ 3.50 GHz, Windows 10 Pro 64-bit (which is already loaded, you just have to finish the installation with info and such), an LG DVD/CD burner, Cyber Power gaming mouse, keyboard, etc.

The tower is super quiet when running and is brilliantly lit with red lights on the inside as well on the side. There are a couple of bays for expansion in the front as well as some open ports in the back for extra cards (sound, video, etc.) which are PCI-e, I believe but, I haven’t taken a peek except to check on the number of memory slots…there are four of those, by the by. The video card is an AMD Radeon R7 200 series with VGA, DVI and HDMI.

At first, I loaded Windows 7 Pro on it because, I really didn’t want to switch to 10 just yet and I am very comfortable with 7. Every one of my clients who has a laptop or a desktop has some sort of 7 version so that had factored in as well. Another thing was, I am in the process of taking an RST (Remote Service Technician) job and they run on Windows 7 as well. With that said, I figured that I was pretty set in keeping 7 Pro on it and that would be that. Oh contraire PC puss! I noticed that it didn’t run up to its potential that I would hope to have seen. I realized that I had all of the drivers and whatnot and, I suppose that I could have had it running at a better efficiency yet, I didn’t bother to take the time. Instead, I decided to install 10 Pro on it again and, voila, it runs like a dream! Being that it has all of the capabilities of running as my workhorse for remote services, I hold degrees in programming and graphic design…oh, what does that mean, gentle reader? It means that it runs wonderfully with Visual Studio 15 (as well as older), Adobe Photoshop, After Effects, Vegas 12 Pro, etc.!

This machine has everything I need to be productive in whatever I want to accomplish, whether it be rendering gameplay videos with commentary, creating a calculating restaurant user-friendly menu system in C# or just installing Office 2016 for someone living in Idaho.

So, I gave the purchase a 5-star rating because it lived up to its potential, despite my alleged accusations that there aren’t any actual companies that take care to build something that was not done haphazardly. The only snag that I had (which was remedied immediately by the superb Amazon staff) was that the keyboard lit up beautifully…but nothing else. That problem was quickly banished with Amazon’s help and a refund percentage was in my bank account…literally…the next morning.

So, in closing, I definitely recommend this PC and, you don’t have to be a PC gamer to enjoy its many benefits because it will do what you ask it…

PS. I used to be a PC gamer then turned to the PS3 and PS4 and am a huge one with quite a collection so, I am not knocking gamers one bit…I still am one, after all.

The PC is still running swimmingly, as I had upgraded the RAM to 32 GB (which I purchased on Amazon, of course). I had no problems whatsoever for the PC to recognize the upgrade, as it booted right up.
CyberpowerPC Gamer Ultra GUA3400A Gaming Desktop - AMD FX-6300 Six Core 3.5GHz, 8GB DDR3 RAM, 1TB HDD, 24X DVD, AMD R7 250 2GB, Windows 10 Pro