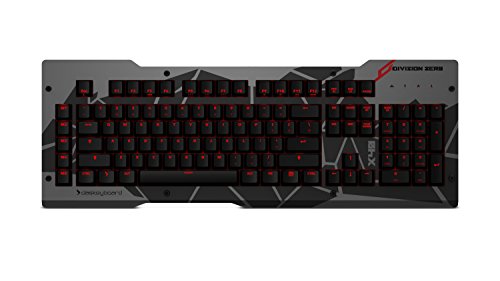 Amazon Review by Storm the Penguin

A good general keyboard with a few flaws

I've gotten to play with DAS keyboard's X40 with mustard Alpha-Zulu switches for a while now and it's a pretty decent little mechanical keyboard. The "gaming" tag adds a few features that many mechanical keyboards are missing such as macro keys and on this model - a audio jack and USB hub (only USB 2.0).

The X40 feels nice and hefty when you pick it up out of the box. The metal top plate makes the keyboard look rugged. Unfortunately it’s the only real metal piece on the chassis. The main body is plastic. Removing the top plate does not alter the overall weight of the keyboard much, so I’m assuming they’ve added a bit of weight under the PCB. Quality wise, I’ve no complaints thus far with the AZ switches…The push of the keys feels solid and there’s no noticeable side-to-side wobble.

Pulling the caps off the stems reveals generic painted ABS keycaps. These are not doubleshot keys, so after a while, a bit of wear and tear can possibly make the keys get that scratched up look. They are also a matte finish, so oils from your fingers are immediately noticeable thanks to the trail of shiny fingerprints on your well used keys.

The mustard switches took around 8 quarters in order to actuate, coming in at roughly 45 grams of push force, putting it solidly into the realm of the Cherry MX Brown’s territory - possibly my most hated switch. The keys do have a very slight tactile bump, but these are not “clacky keys”. The only real noise comes from the keys “bottoming out” as you press them. For those who have never used a mechanical keyboard or do not know what the grams for actuation force means, basically the amount of force it takes to press a key. The Cherry browns are the most “generic” of switches, generally recommended to first time mechanical keyboard users. They’re not super light nor super heavy, sort of the ‘white bread’ of the mechanical keyboard switch world. This is the switch most of your Logitechs and other “Gaming Mechanical Keyboard” companies go with.

I had a few custom Cherry keycaps sitting around and they fit just fine on the AZ stems.

At the time of this review, this keyboard was priced around a hundred and thirty dollars, putting it around forty dollars cheaper than an RGB Ducky Shine 5, but more expensive than a Ducky One. For a mechanical keyboard, I would still reach for a Ducky over a DAS, but the X40 tacks on a few features that make it stand out to the gaming crowd. Specifically, the standalone macro keys and the onboard headphone / microphone jack and USB Hub. The ability to switch to a Windows key disabled mode by way of a Function combo is also something that’s not always available on typing-specific boards. NKRO rollover is of course a big one, and I couldn’t get this keyboard to stop reading keys even after simultaneously pressing each alphabetic character A through Z as well as 0 through 9 on the numpad. If I had more flexible hands, I could’ve probably kept pressing keys and the keyboard could’ve kept reading the input.

All-in-all, the X40 isn’t a bad little keyboard, specifically for the gamer who’s looking for macro keys and a closer headphone jack or USB hub. For the current price point, it’s not a great bang-for-the-buck as you can get similar keyboards from Corsair, Logitech, or Cooler Master (to name a few) with RGB back lighting. Having only red LEDs should really drop the price down a bit more in my opinion, especially in light of the fact that the switches are not Cherry, but Cherry clones.

The interchangeable front plate is a nice touch, but it’s also the only metal on this keyboard. At thirty dollars a pop for more face plates, they’re not a cheap cosmetic change. It should also be noted that the screws that hold down the face plate scratch up the paint under the screws, so quite a bit of scuffing there. It also suggests that it probably won’t take much to scratch the paint on the plate itself (so be careful when cleaning).

Not a bad little keyboard, but probably won’t be the one I reach for first.