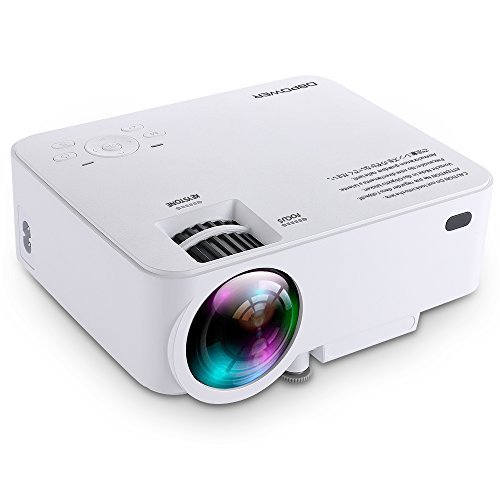 I've had this projector for a few hours and have had a chance to try it out. I have years of experience with LED projectors, and this one has some good and some not so good characteristics. First of all, it's not a toy, this is a real projector that does a decent job. With a Roku stick as my source ,the picture is clear and sharp with vivid colors and It mounts easily on a tripod . I have several LG LED projectors that are rated at 1500 and 1000 lumens. Both of these are considerably brighter than this projector that's rated at 1500 lumens, so I would take that rating as suspect. Those LG projectors are also 11 or 12 times the price of this DB projector though. For this projector to function properly, it does need to be in a dark room, the darker the better.

I’ve been projecting it onto a 100 inch Elite tab tensioned screen, with the audio fed through the headphone jack into a JBL Eon 210P professional stereo PA system. The sound is excellent and the picture is certainly acceptable considering the price I paid for this DB projector. I did some custom configuring of the picture mode to bring the image quality up several notches, the standard settings were not the best.

The fan noise is audible when you turn it on, but not objectionable.If you’re watching a movie with an external sound system, the fan noise becomes inaudible. I’ll hook a laptop up to it later tonight and see how it does with powerpoint and spreadsheet files and post an update to this review.

I hooked the hdmi port on the projector to an HP EliteBook laptop, and it does work. The resolution on the laptop did switch to the native resolution on the projector though, 800x600. The results were not as pleasing as the video through the roku stick was. I noticed some of the screendoor effect on the screen as well as text that, while readable, was not as clear as it is on my higher resolution LG projectors. That wasn’t really surprising. I did take away one star in my rating after seeing it’s performance with a laptop.

As long as you know what you’re buying, this is still a good deal. This is not a legitimate 1500 lumen projector, nor is it an HD projector, but for the price, it does a credible job of projecting video onto a larger screen.