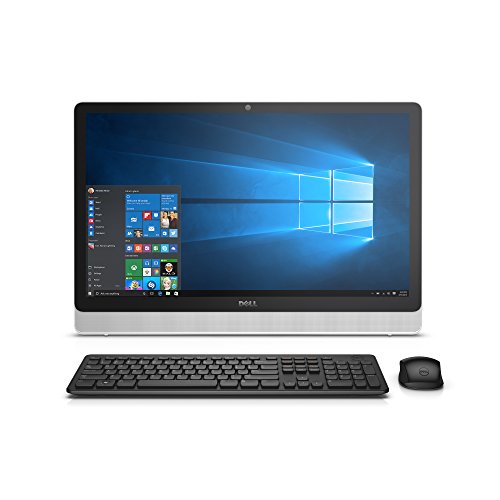 Set up the day I picked it up. Came home from work, turned it on to play around with it, and I got this weird screen flickers and I couldn't do anything. I am now having to do a factory reset, which is wiping the memory clean. Ugggg this is such a hassle. Brand new. If this doesn't work, I will be returning it due to software issues.

Amazon Review by Bill A. Belt

Let me start by saying that I am NOT a computer person. Yes, I use them, but I do not build them, add much software to them, or make a lot of adjustments to my machine. Just the opposite of my kids. With that said, I will give you my thought on this new Dell Inspiron i3455 desktop computer that I received last week.

I am very happy with this machine. It was extremely easy to set up. The shipping box contained the screen, mouse, keyboard, and plug. The hook up was very easy. Once I had the plug, mouse and keyboard hooked up, I simply turned the machine on with one touch of a button. A couple of registration questions and I was surfing the net and answering my emails.

I was a little worried about this machine having Windows 10 since I currently use Windows 7 on my laptop and desktop. I was pleasantly surprised that I have had no problems with the new Windows 10.

As a non-computer person, I am very happy with this machine and the preference it has given me this last week. I would definitely recommend this machine to a friend or anyone looking for a good desktop computer.

–Design–
The design of this All-in-One PC is easy on the eyes. With a minimalistic view, all around really shows off how you can have a PC with very little cables; which is great because you don’t have all of these cables running everywhere getting in the way. I have a cat so having less cables is great!

The glossy black and white is always a plus to make it easy to flow with any theme around your house, whether be living room or bedroom, etc it will look very slick. People can love touch screen, it is really neat feature to have on a desktop PC. For the most part a lot of us are already use to this feature on tablets, phones and some laptops but on a desktop screen is not very common but quite neat.

The keyboard was nice, I am typing this review on this PC and the buttons are not huge, it’s not clicky clacky which makes it decently quiet while typing. I didn’t have any issue with key input lag nor any input lag with the mouse, they both worked normal for me. It is a flat key keyboard but Im okay with it, it can take a few to get use to but it didnt take long.

The stand is built in so you do not have to have any tools to set it up.

–Video–
It didn’t have any dead pixels on arrival, no light bleed and had great colors and clarity as I expected it to have. The colors were nice and crisp and seemed to be full of life when watching videos, day or not its clear.

–Sound–
The sound is pretty awesome if you were to ask me, I’m sure some will diss it but I mean really? It is actually pretty good and high, sure it could be better but better costs more and good speaker systems are not that cheap. I don’t know exactly how many speakers nor the size of them but they are very easy on the ears. Not that high crackling you hear with laptops or generic speakers you can buy. They did a great job with them for the space they had to work with. I did tests with country, rap, hip/hop, pop and alternative rock.

–Webcam/Mic–
The webcam is okay, about the same you would see in a midrange laptop, mic is about the same feeling. Nothing truly amazing but good for general use like Skype/Google Video.

–Speed & Response–
The touch screen is perfect and I love it!

All of the apps that I installed went without issue. When clicking on them they popped up quickly and loaded normally.

This is not a gaming PC so I did not try to game on it but I’m sure having an AMD APU it could do some games at low/medium settings, my HP Touchscreen Laptop was slower than this PC and it played Rocket League quite well, so games that are not heavy on graphics should do fine.

–Other thoughts–
What I really love about this pc, besides basically no cables is that since It’s an AIO Desktop you can put it almost anywhere on any surface in the house without taking up room and can easily move it for a change of scene or to clean the surface it is on. With a desktop, you have to unplug all of these wires and move it, which it can weigh a good amount more.
My family (general users) were all impressed with this PC. They kept trying to take it away from me! lol

A lot of the bad reviews seem to be really based on Windows 10 issues more than the pc itself. OEM Bloatware has always been around and yes it can slow the PC down a good amount, I dislike it greatly myself. The 5400RPM hard drive is another reason you might feel it’s slower, however putting a SSD in this machine would cost more. The average user really just wants to see plug-in-play, which is fine, being a builder and gamer I always do fresh installs because I know how and it runs perfectly after with that. Lots of people do not know how to do that but if you uninstall a lot of stuff that is pre-installed it will run much better for you.

I absolutely hate having a locked and lacking of features too. It seems almost normal today to have it. Being a builder and gamer I like seeing features and options in my bios and a nice updated UEFI one too.

*Please Note: I received this laptop in exchange for an honest and unbiased review.