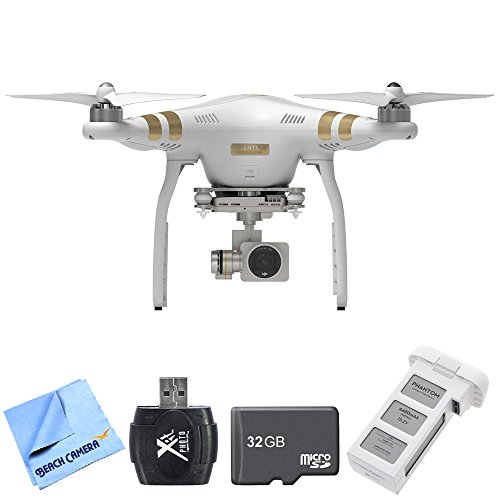 I just received the phantom 3 professional yesterday, so I haven't had a chance to fly yet. I will update this review after I've had a chance to break her in and figure everything out. I mainly wanted to post this now to clear up questions about what is included. I ordered an extra battery here on amazon, because description made it appear that only one came in the bundle.... wrong. I was pleasantly surprised to find one in the phantoms box, plus an extra dji battery included! The phantom includes 8 propellers, and seller also includes 2 extra. There was also the SD card, reader, and lens cloth mentioned in description, along with a very nice hardshell backpack. The backpack has exact cutouts for the phantom (props removed), remote, propellers, three batteries (plus battery in phantom... a total of 4 batteries can be carried), plus a slot whereally you can stow your tablet/phone. Also, in reading reviews elsewhere, I was under the impression that you had to supply yor own USB cable to link your tablet to the controller..... not so. DJI has included the cable with the phantom. To sum it all up, I believe this bundle is one of the best bargains out there. Especially considering the included backpack and spare battery, which both run about $150 each. It all came very well packaged and was delivere in 2 days. (Note: it was an even better deal during a lightning deal here on amazon at $1190!)

UPDATE: I’ve had the P3P for a couple of weeks, and all I can say is, WOW!!! I have had a Parrot AR Drone 2.0 for a while, and love it. It was my inspiration to drop a chunk of my IRS refund on this Phantom. I must say that I am not disappointed in that decision. This is a HUGE step up from the Parrot, and I have completely fallen in love. The Phantom 3 Pro is so much more stable and easier to fly. I love how well it can hover in place, without the slightest drift… even in moderate breeze. This of course is due in large part to the on=board GPS, an it’s more advanced sensors. The video and photos are so much better, as well. even when the P3P is being jostled by wind and maneuvering, the video is still steady and smooth, thanks to the cameras gimbal mount. But by far, my favorite thing about the P3P over the Parrot is the incredible range!! The Parrot’s range is limited by the strength of your phone or tablet’s Wi-Fi signal (usually less than 100 yards), whereas the Phantom 3 Advanced and Professional’s dedicated remote uses what is called “Lightbridge” technology, which has a range of up to 1.2 miles! I have only had it out to about 1/2 mile, and it worked flawlessly! The return-to-home feature is also nice, because if you do lose connection, or if the battery strength gets too low, the P3P will automatically fly back and land at it’s original take-off spot. Very cool! You can also program in altitude and distance limits, so you don’t get too carried away while immersed in your adventures.
While there are still a lot of features I have yet to try out, I can honestly say that the Phantom 3 Professional has already exceeded my expectation. DJI really hit it out of the ball park with this ultimate “big boys toy”!!! Thank You so much, Beach Camera, for offering such a great deal on this bundle, finally enticing me to make one the best recreational purchases I have ever made!