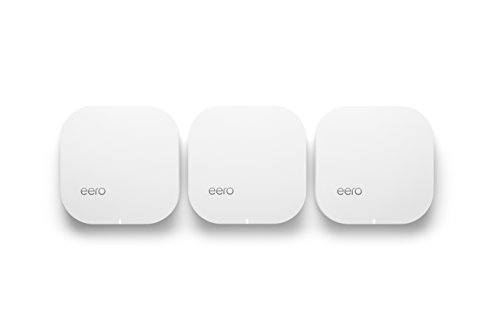 eero has changed everything

Fantastic and game changing. I have a large old brick home that requires internet on three floors. Here is a list of the wireless routers that I purchased in the last three years and that did not work to provide reliable wireless in our home: (1) Airport Extreme (2) Netgear N900 Wireless Router, (3) Linksys EA9200. In a failed attempt to make these three different wireless routers work I also added a Netgear range extender and used an Securfi Almond as a wireless range extender. None of these combinations provided reliable wireless internet throughout our home. Sometimes everything would work and sometimes some devices would get kicked off the network and could not login without rebooting everything. The range extenders often did nothing. Before I purchased eero, I was unplugging and restarting my modem and router at least once a day. Even at its best, I could never reliable get devices to work that required a reliable and strong wireless connection. In particular, I have 5 Nestcams that would rarely stay connected for a full day. They require a very strong and reliable wireless connection to work. Also, WiFi calling on my AT&T iPhone does not work unless it has a strong 5ghz wifi connection which I never was able to achieve consistently in my home. I have approximately 30 different devices connected to our network at any time (5 iPhones, 2 iPads, 2 apples TVs, 1 Roku, 1 iMac, 2 MacBook Air's, 8 Sonos speakers, 5 Nestcams, 1 Peleton bike, 2 printers, 2 backup hard disks etc.) and in order to get all this stuff, I had to hard wire as many of them as possible directly to ethernet because wifi was never reliable enough.

eero has changed everything. It took less than an hour to set up 3 eero units. Everything worked on it immediately (Note: you have to restart your modem as instructed and unplug an restart any ethernet switches). We have wifi in every corner of every floor of our house. Every Nestcam has worked continuously without fail and I have full wifi calling on my iPhone. The eero app (which is fantastic) lets me check the status of my network from anywhere and has shown 60mbps of download speed, 5mbps of upload speed and all three eero units online since the moment I plugged them in. My family has never been happier.

ps If anyone wants any of the routers or extenders the eero system replaced, let me know and I will send them to you for free (picture attached).

Works Very Well When the Main Problem is Distance

I needed to set up household wi-fi service for a client with a home that was much too large for a conventional wi-fi router to reach the places where wi-fi access was needed most. Unfortunately, even though the home was fairly new, the builder did not include any Ethernet cabling. I'm not a fan of conventional wireless range extenders, because they tend not to provide great coverage (they're really just meant to eliminate dead spots), and they either use half the available bandwidth for extender-router communication, of they dedicate the 5GHz channel for that communication, leaving the lower-speed 2.4GHz channel for your wireless devices. My preferred solution for this problem is to combine powerline networking with an inexpensive, industrial-grade wireless solution such as Ubiquiti UniFi access points. That wasn't an option in this case, either, because the home was powered by four individual electrical feeds from the pole, one feed for each floor, with little or no crossover. So, powerline networking kits worked beautifully on each floor, but could not establish fast connections between floors. I was at the point of telling the client that he was going to have to spring for an electrician to run Ethernet cables - an expensive proposition, because local building codes require metal conduit for this - when I found out about Eero. I decided to give that a try before recommending an electrician.

Eero is supposed to set up easily via the home’s wired Internet connection and a smartphone. This part did not work the way it was supposed to, and I’m not sure if that was because of the AT&T Uverse connection (which provides this particular home with a very good connection, but maybe something on AT&T’s end gets in the way), less than stellar cellular service or a bug in the Eero firmware that shipped with these units. In any case, I carefully followed the directions for plugging the Eero unit into the Uverse gateway, then got the Eero app on my Android phone, but the app could not find the Eero unit automatically. I ended up having to use the option for keying in the Eero unit’s serial number; then, the app found it and set it up with no problem. I had the exact same problem with each subsequent Eero unit - I installed four, one on each floor of the house. As soon as each Eero unit began communicating with the system, the app recommended a firmware update for it, and due to the problems getting the initial connections set up, I allowed the app to go ahead and update each unit.

Once all the units were up and running, wi-fi throughout the house was terrific. The system does sacrifice some bandwidth - a wired connection directly to the UVerse gateway measured (with testmy.net) at just under 20Mbps, a connection to the gateway’s built-in wi-fi measured about 14Mbps, and the wi-fi measured at any Eero unit was 10-12Mbps. Note that unlike some other “mesh” wi-fi systems, Eero units communicate with one another, not exclusively with the “base” unit, so bandwidth measured pretty much the same no matter where I was in the house as long as I was in range of an Eero unit. And although the signal degradation from the UVerse Gateway was significant (about 45%), wi-fi speed was still quite respectable, and reliability was solid. Without Eero, the best wi-fi connections I could get anywhere other than right in front of the UVerse gateway were under 5Mbps, and most connections measured elsewhere were spotty and yielded test results in kbps. The improvement was more than enough to make the homeowners happy.

Please note that the house in which I did this installation was of modern construction, which means the walls were made of drywall on wood or metal studs, and the floors were similarly fairly porous to wi-fi signals. The main issue for the owners was distance - the AT&T equipment was installed in the basement, and most of the need for Internet access was on the 3rd floor, and the cost of moving the equipment to a more sensible location was high. Eero might not work so well in buildings where the construction materials interfere with wi-fi signals. It would be interesting to see a test in a home that was expanded, and therefore has masonry blocking wi-fi signals to some rooms.