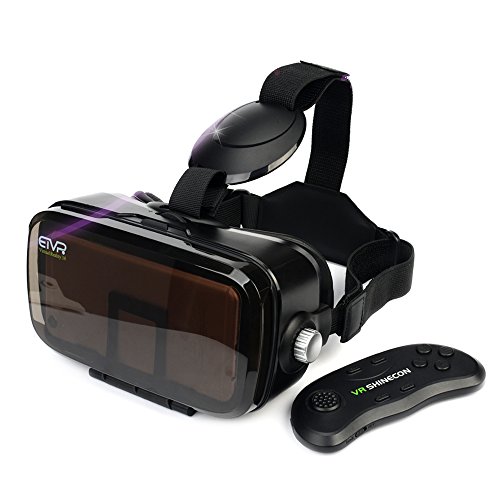 More Comfortable Than Other Headsets

This VR headset is a step up from others I have reviewed. Better comfort, OK button and BT controller included make this one a good choice.

I have used a few different VR headsets now. All of them have had at least one deal breaking problem. Often comfort plays a huge role. Many headsets rest uncomfortably on my nose. This one has a more outward shaped face pad to help keep it off of my nose. I can actually wear this one for longer periods of time. The straps are easy to adjust with simple velcro. There is a small amount of light infiltration from the sides. You could tape the slits if you use these in full light situations a lot.

Optics are easy to adjust using the knobs on the side and dial on the top. I found the best position most of the time to be eyes full width, lenses at their closes point.

This headset just barely fits my LG V10 which is at the top of its size rating. My iPhone 6S+ fits easily.

The included BT controller is adequate for many things like fast forwarding through videos and actions in games. I noticed that many functions weren’t assigned the way I would like in many apps. This is probably a lack of standard in button configuration or lack thereof in apps. It works good enough for basic functions in most controller capable games/apps.

Unlike many VR headsets, this one does have a built-in OK button on the headset itself. This can be quite important in most cardboard based apps. On other headsets, I have had to use a large magnet outside the headset, which doesn’t often work that well.

Overall, this is the most comfortable and feature packed headset I have tried. Which comfort level isn’t 100%, it is still better than the others I own.