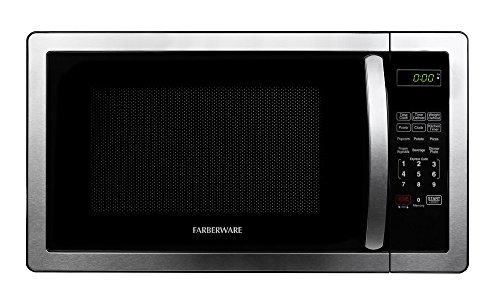 Ok so after my last microwave blew up, I was lost. I realized I was 35 years old and had never bought a microwave before. I had been gifted two in my life. One when I went to college and one when I moved out on my own. Luckily for me I have had some great luck with long lasting microwaves.

After reading for nearly two days and not being any wiser as to what I wanted or needed, I stumbled across this. I had started to make a checklist in my head of what I wanted and what I certainly did not want. I certainly did not want another Frigidaire microwave since mine had blown up. That was a bit too real for me. I also wanted something with more power, ie; at least 1000 watts. I wanted it to be sleek, and not giant, but also be bigger than my last microwave. I wanted some good reviews where my questions were answered and people who are in the “unfamiliar with microwaves in general” club could get a better idea of what in the world it all means. I needed guidance and I got it.

This microwave came in perfect packaging straight from the manufacturer. It could have been dropped off a roof and had a solid chance of being fine. It looked great. It was sleek, with stainless steel and black lines. It doesn’t beep forever if you forget about your midnight snack, it has the capability of the :30 command, it does the thing where you hit 2 and boom, 2 minutes comes up. It’s quiet, it’s 1000 watts, and it’s consistent. The handle is super easy to use and it doesn’t slide around. The tray spins and is easy to assemble. People said they were weirded out by the fact that it was gray inside. I was weirded out by the fact that I had ever not had a grey microwave. My friend Sara came over and I showed it off. I mean I really, really like this. Can you tell? These issues are all concerns I did not know I had until I read up about microwaves. Trust me, these are all
important things. This is NOT the microwave for you if you live in a small apt or college dorm. I have a lot of counter space and this was just fine for that. I have had 0 problems with this and I recommend it to anyone and everyone who is looking to purchase a new one. I will update if it happens to blow up, but I have a feeling we’re going to grow old together.