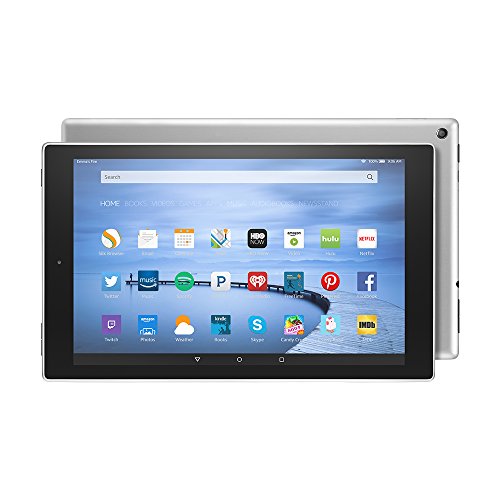 I wanted to like this tablet...ended up somewhat disappointed

I bought this tablet for its size, economical price point, and the ability to watch content offline. And it offers exactly that...but falls short on performance parameters. If you're price sensitive and are looking for a value tablet, large screen, and the ability to watch content offline, this is a great device to get. However, if you already have an earlier Kindle like the HDX 8.9 or even an earlier version of the Fire, I recommend keeping your tablet since this device wouldn't really be a worthwhile upgrade. I have been disappointed with several operating shortcomings of the device.

all factors made this a frustrating device to own . The HDX is far better in every aspect, heck even the original Fire 7 runs better than this device.

The only good things about this device are the screen size and the MicroSD slot. So if you’re only watching videos on this, and would like to have the option of watching content offline when you’re traveling, this tablet would be just fine. Otherwise, the HDX is still a better option, or you could get the 7" or 8" Fire models. Those are priced cheaper and work better.

Original review is below

For the price point and size alone, the Fire HD 10 would seem like a good deal. For its performance, however, it falls short of expectations. I would probably rate it a 3.5 overall. If it wasn’t for the price, the rating would have been even lower. This is a value mid-tier device with a screen size that is good for videos, but the tablet’s weight makes it cumbersome for reading books, and it has a number of flaws that need to be ironed out with (hopefully) future software updates.

Meant to be a mid-tier tablet and it is exactly that. The device is claimed to be “Designed for Entertainment” - true, but I would also add “Not designed for performance”.

FORM FACTOR - The tablet is thin and light, doesn’t feel like such a large tablet given its thin form factor. The device measures 10.3" x 6.3", slightly taller and narrower than the iPad Air which is 9.4" x 6.6". The screen when viewed in landscape mode is great for videos. Apart from the increased size, it feels sleeker and less boxy compared to previous Fire models. However, one-handed reading is not very comfortable on this device specially with a case on it.

SPEAKERS - The dual stereo speakers are superb, definitely one of the finer points of this tablet. At full volume, this tablet is loud (even with Amazon’s case on it which has a cutout for the speakers). I have always preferred to use NR headphones to watch videos since I feel they deliver better sound quality, but the speakers on this tablet eliminate the need for headphones, the sound is just that good. Note that give the location of the speakers, the sound may get slightly muffled if you’re sitting in bed watching videos in portrait mode, since softer surfaces will come very close to the tablet.

EXPANDABLE MEMORY - The tablet comes with a MicroSD card - a very useful feature to have particularly when traveling or if you wish to watch content offline. Accessing the card slot is a little tricky, but once I was able to get it in the slot, it has been sitting in the slot securely. With the ability of viewing offline content viewing with Prime membership, you can download and watch movies and shows even when Wi-Fi isn’t readily available. This makes the microSD card slot a very welcome addition, especially for long trips. I’m glad this feature is finally available.

SCREEN - The screen is made of gorilla glass, similar to previous Fire versions. The display is 1280x800 which looks sharp, technically short of most tablet specs, but it looks good. For comparison purposes, the Fire HDX 8.9 has a 2560x1600 display.

SPEED: The device is slooww - this is due to several bugs in the OS, which should hopefully be fixed soon. But for now, the device lags when performing basic operations like loading a video, or switching from one app to another. This is more noticeable when you are switching from one app to another, or closing a video and starting an app. If you switch from landscape mode to portrait mode, the device takes a few seconds to make the switch to the screen. The lag is most apparent at the time of switching or starting/closing apps for the first few seconds, but once an app or video is loaded, it runs fine after that.

BATTERY - Battery life is horrible, so far in my experience it runs out within a few hours even though the advertised battery life is 8 hours on a full charge. I was barely able to squeeze out 4 hours from it. Again, low price equates to a subpar power battery I guess. Given the fact that both the charging port and the headphone jack are close to each other, watching videos in portrait mode can be cumbersome. This makes it difficult to watch and charge the tablet at the same time (and since the battery life is just ok, I definitely want to be charging my Fire while watching videos so it doesn’t run out). Switching to landscape mode solves the problem, you can charge and use the headphone jack together.

CAMERA - The Fire 10 has a 5MP rear camera. This is good enough for a tablet which is not really my first choice for taking pictures, it’s useful for situations when I don’t have access to my phone. The 720p front facing camera for video calls is just fine as well.

APP STORE - The app store remains the same Amazon app store. Still no Google Play unfortunately. The tablet looks and feels so much like a Android tablet, so it seems strange to not have Google Play. If the Amazon app store had as many apps or games as Google Play, this wouldn’t have been an issue. However, the app selection available at least as of now is skeletal.

NO MAYDAY BUT SCREEN SHARING FEATURE - Unlike previous Fire models, this model does no support MayDay, at least not yet. However, it does come with Screen Sharing which allows a customer service technician to access your tablet with your permission to help you navigate through the tablet or solve any technical issues you may be facing. This is good enough for me in case I need help, I’m not crazy about actually seeing the rep that I’m talking to.

BOTTOM LINE - Overall this is a decent mid-tier tablet - value for money given its size and price point. And that’s what it’s really meant to be. Yes, it’s not great, but then it’s not $600 either. If you are looking to buy a basic tablet primarily to enjoy the large screen when watching videos, this is a good value proposition.

WHICH ONE TO BUY? - If you are looking purely for a basic value device, for yourself or your kids, that gives you access to the Amazon ecosystem without caring for audio/video quality, the 7" at $49.99 is probably the best option. However, with the slightly increased real estate and added features (better processor, screen, speakers, expandable memory slot), the 8" tablet gives you just enough to spend the extra $100 for a better user experience. If you want a basic tablet for watching videos and playing games and definitely care about screen size, the 10" Fire HD for an even additional $80 is a decent option. The added $80 does deliver a better watching experience compared to smaller tablets.

I can do everything I need on this tablet while traveling - check my email, browse the internet with the silk browser app, youtube, free app games etc. Because I have an amazon prime account as well, I linked my tablet to it so I can access a huge variety of free music, tv and movies. There are several offline options to load files onto the SD card, or to your tablets memory, so you can watch movies or use it as a mp3 player while away from internet. I watched a 2 hour movie on the airplane and only went through 30% of the battery power. Beautiful screen, loud speakers with the option for headphones. I have no reason to want anything more expensive, such as an ipad or surface since this does all I need while away from home.

How to Replace Your Amazon Fire HD 7 (4th Generation) Battery