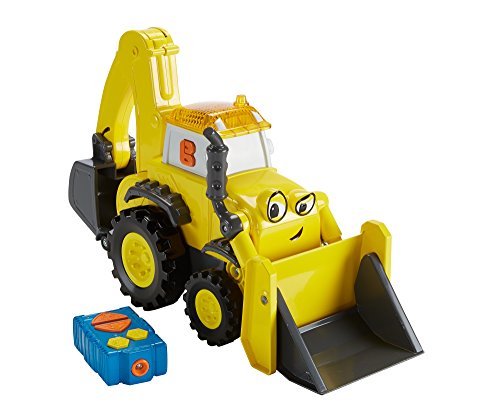 Cute but LOUD, and slightly different

First of all, this thing is LOUD. Like super loud and it's noisy AF. Scoop says Yeeehaaaw where are we going about every 5 seconds. Bob the Builder also talks to Scoop, and then they talk to each other. Scoop has a lot of sayings, all of which are annoying. That said, my son loves this tractor. The buttons are kind of weird. It goes forwards and backwards, or it moves the back scooper kind of dancing to the Bob the Builder song, and then it does this trick where it turns on it's side and throws it's scooper up and down to music and saying Yeeeehaaaaaw.

The plastic and overall Scoop tractor is attractive and the remote control worked right out of the box. We did end up adding new batteries later in the day. IT DOES NOT WORK ON CARPET. See those caps. That’s because it’s even louder and sounds like it’s dying on the carpet and my son got super frustrated. It does work on the tile and outside on the cement.

Compared to other toys (trucks and tractors that light up and make noise) it’s better quality than some of the garbage from China. This was probably made there too, but slightly better build and ours hasn’t died in five minutes. It’s not as great as a metal john deere tractor, but again, it’s plastic and lights up and talks and has a remote control - so it’s a win in my son’s eyes.

Great for the Bob the Builder enthusiast or tractor lover. But buy yourself some ear plugs.

didnt work very good not really worth the money