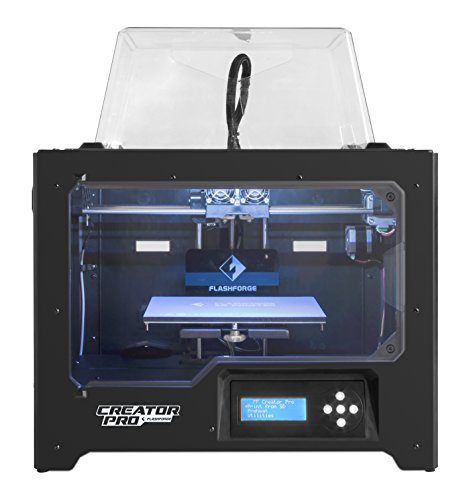 After spending untold thousands on developing prototypes, my wife coming close to divorcing me, and a lineup of ideas and projects, I was looking for a more cost effective way to bring my ideas to life. I did a significant amount of research on 3d printing, but not an exhaustive search, as my main goal was finding something I could afford, but that had the ability to actually bring my crazy ideas to life. As I type this, one of those ideas is being built. I've posted some quick photos and a video to show the progress. So far it has been printing for about 3 hours and is coming along quite nicely. There is one minor issue that is a result of a learning curve in terms of settings, as I've learned that addressing things like plastic curling from the bed, stringy prints, etc., have more to do with material and environment, than anything related to the machine itself. I have to say that it took me a few tries to get to the point of printing the concept in the photos and video, and there are still some more settings I need to work out, but the product has been superb thus far.

But let me start with my general experience with FlashForge, Tang and his team.

First of all, I originally order the first version of this Creator. http://www.amazon.com/FlashForge-Printer-Extruder-Compatible-Volume/dp/B008CM2TCU/ref=sr_1_1?ie=UTF8&qid=1394165975&sr=8-1&keywords=flashforge Luckily, I ordered it late on a Friday night, and the very next day FlashForge released the Creator X. I canceled my original order with Amazon, thought about it for a day, then ordered the Creator X as a “Pre-Order” item, because the printer was just posted and was stated to be shipping in March, this was February 11th, 2014. I was ok with the dates, because I was still designing some of my ideas and knew it would take a few weeks to get things right. Well, on February 13th, I got a notification that the Creator X had shipped. I was shocked (and worried my wife would find out before I had the chance to explain what I had purchased…a whole other story.) The printer arrived by Thursday of that week. It came directly from China, had all the “Paperwork” attached and it was quite impressive. It took me a couple of days to explain to my wife what I had done and get clearance to unpack it in my basement. (Just an aside, guys that are married, make sure the first thing you print is for her.) I finally got it unboxed and started to put it together.

At this point, I started to get worried, because I ran into a few issues that seemed perplexing. Before I get into these, I have to say, the other product reviews talked in detail about Tang, his responsiveness, how helpful he is, etc. and I 100% concur with that feedback. Though there were issues, a couple of them immediate show stoppers, Tang responded almost immediately, mostly within 20 minutes, but no more than a couple of hours (time difference being an obvious factor.) The five star rating has more to do with Tang’s customer service, and less to do with the quality of the device, not because it is low quality, but because it is my first 3d printer and I have nothing to compare it with. But, I will post some additional pictures once I have some of my ideas printed out.

Regarding the packaging, it was very well packed, no damage, and the unpacking instructions were spot on. Once I got it unpacked, I started to run into some issues. So here are the problems I initially ran into:

The rest of the things I’ve been wrestling with are software and settings related. You do any search for 3d printer troubleshooting and you will very quickly learn that tinkering is the name of the game with this toy. And it is exactly spot on. I’ve come across a great thread from a guy who has spent many hours of his time and provided valuable insight to save you many hours of your time. Definitely worth a read if you are deciding to get a Flashforge. Though it is for the older model, it was 100% relevant to the Creator X: […]

Ok, so I am still learning, experimenting, testing, etc and it has been a blast to learn about the machine, understand how it works, take it apart, and put it back together. It is honestly the best way to become familiar and really understand how the world of 3d printing currently works.

So the machine is great, once you get any initial troubleshooting things out of the way and begin how to use it. But I really want to emphasize the company on this one. And this is where I get a bit philosophical. If Tang’s dedication to his product, his company, his pride in what he has brought to the market place was absent when I received this product, at the first sign of trouble I would have packed it back up and told him to send me a return label. But there was a valuable lesson I learned, that I think more American’s could take note of. That is, a realization that when you work hard, are honest (oh this reminds me of something else with my experience), stand by your product, don’t expect people to just accept what you put out, and have no sense of entitlement to someone’s business, you develop a true sense of what it takes to make people satisfied with your product or service. Tang has this down to a T, a big FAT T. I am inspired by his entrepreneurial spirit, it just makes me want to design and print, and work, and tweak, and develop and never give up on my own dreams. So thank you Tang, not for the product you’ve given this market place, but for the example you’ve shown me, and clearly, countless others based on reviews. I will continue to post my experience as print more and more with the Creator X. Thank you again.

Oh, and I mentioned earlier about honesty…this blew my mind. So when the Creator X was first posted, the cost was 1399.00. I purchased it at that price. The day the product shipped, February 13th, I guess Tang decided to lower the price to 1299. I got an email stating that I was getting a refund of 100. I wasn’t expecting it, I had already mutually agreed to the 1399 price, and it was such a pleasant surprise to experience this type of honesty. Hard to come by these days. Thanks again Tang, I wish you great success in your business and look forward to continuing to work with you.