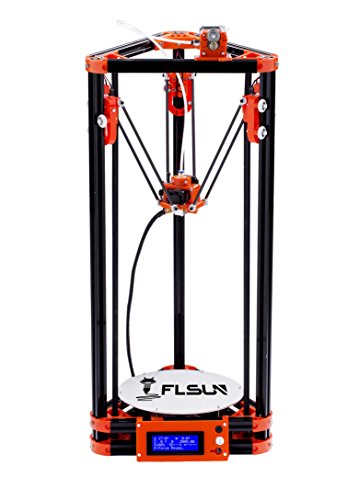 UPDATE: I've had this printer for several months now and it runs like a champ. I haven't calibrated the head or board in months now and it still prints well. I've used PLA, Wood, and elastic filament and have had no issues and no clogs. Overall I love the printer.

It’s not quite a 5 in my book because early on a had an issue with the barrel power connector on the board. But I fixed that myself.

I’ve had this printer for a couple weeks now and here is my experience thus far.

Summary:
Overall, I think this printer is great. It’s great for the price! I am quite amazed at the quality and speed of the printer for the price that you pay. I couldn’t recommend this printer any more for an entry level printer.

Packaging:
Everything came neatly packaged and all the various nuts and bolts and odd pieces were well labeled.

Assembly:
Assembly was mostly straight forward. They include links to videos to set up, but I found it easier to just follow the included (detailed) pdf document. The pdf is like 95% good and like 5% frustrating. WARNING: THIS TAKES A LONG TIME TO ASSEMBLE! I personally spent about 8-10 hours setting it up, and a few more getting things just right. Note: I bought this printer knowing that it would take time invested in order to set up. That comes with the price, but I specifically chose a kit vs pre-assembled printer because I’m fairly new to 3d printing and wanted to get as much knowledge about the pieces of a printer so that I’d be able to fix/adjust/upgrade it in the future. I do not regret this decision because I learned a lot through the build process.
I do have a few complaints on assembly. There a few little details that could be more clear, and some that were missing that I unfortunately found out the hard way (more on that later).

Calibration:
Calibration is definitely a pain. Leveling is not always good, even with the self leveling. I found that narrow prints turn out better. I calibrated using a caliper to measure the distance of the bed to the base. I also did the same with the screws for the limit switches, and a few other components. Once it’s leveled enough, the printer prints fine.

Print quality:
I will be attaching some images, but I found the print quality is great (for the price). I’m amazed at how quickly it prints and how accurately it prints. NOTE: I am printing with PLA, so that helps with the quality.

A few missing details in the instructions:
~In order to make the LCD visible, you need to adjust a screw on the back of the lcd that adjusts contrast
~MAKE SURE YOU CHOOSE THE CORRECT INPUT VOLTAGE ON YOUR POWER SUPPLY (SWITCH ON THE SIDE). The instructions did not mention this and I did not notice the switch, so I eventually killed my power supply because it was on the wrong input voltage (I had it on 220v but I use 115v). I ended up buying a PSU and converting it to a power supply.

Some cheap parts:
I had issues with the DC power barrel socket on the board. It was loose and so the power would continuously cut out and ruin my print. I fixed this removing the connector and soldering wires directly to the positive and negative pads on the board. No more problems now!

No filament holder:
I ended up rigging something together to hold my filament, but it did not come with anything which is a bit of a downer… but not a deal breaker.

@fuzal Did you buy it?