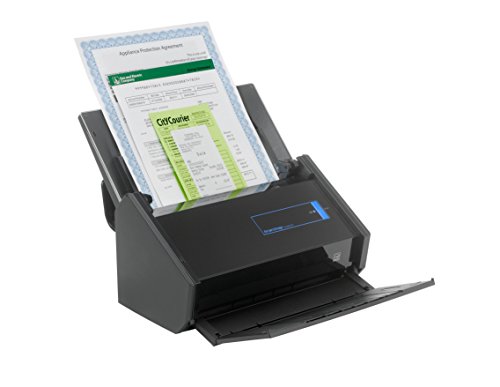 Wish I'd had this when I first started digitizing my office!

After fully digitizing my office, I was tired of waiting and waiting for my previous scanner (an all-in-one) to do its job. I finally bought this one after a year of falling asleep while waiting for things to scan. This scanner does not disappoint. I am using a Mac, and I'm using the installed software. To have it completely scan, index, and save over 1500 pages in less than an hour about made me cry I was so happy. I finished everything up so fast I didn't know what to do with myself after that! It didn't eat any pages (of really soft paper, not regular paper), it didn't skip any pages, and the auto-detect for black-and-white versus color and blank-pages is ridiculously helpful. I wish I'd bought this scanner sooner and didn't suffer through a year of agonizingly slow scanning. It even had no problem sucking in very hard paper (like a cover) and then right back to soft paper of a different size! It cropped everything nice and neatly, too. Love this scanner!

UPDATE: NEW COMMENT: THERE IS a “catch all that paper tray” on the front. Another reviewer pointed it out to me and I carefully examined the front panel (the one that flips down) and it’s the flush with the tray itself so I never would have noticed it. Problem solved! I took a picture of it…gee, I think I should dust that off…

ORIGINAL COMMENT SAID “The only thing I’d say that needs improvement is the “out” tray. It needs another flip-up lip to catch the paper as it comes out, otherwise it starts to pop off and dump on the desk. I solved that by resting my hand in front of the tray when all the paper came out. The paper bumps up against my fingers and then re-stacks itself. I tried a coffee mug and a box of Kleenex to block it from falling off, but that makes it slide up so it’s just as bad.”

I missed it when it was gone

I've had a Fujitsu ScanSnap since seeing one in use at my doctor's office. I bought it maybe 7 years ago. While re-arranging, I did something really stupid and it accidentally dropped on the floor.

I was so angry with myself! I had no idea what to do but I knew having it fixed was probably not an option. What to do??

As luck would have it, I saw a new in box “Neat Desk” scanner at a Goodwill auction. I picked it up for under $100 and thought cool! I thought it would replace my ScanSnap and everything would be all better. I thought wrong.

After about a month or two, I was missing my ScanSnap pretty badly. The NeatDesk system confused me; it seemed to require that I go through a bunch of steps to get what I wanted including having the scan go to the site for processing or something and I wasn’t comfortable with that. So I used Windows Fax & Scan utility. But it wasn’t the same.

I made the decision to replace the ScanSnap with a new ScanSnap. I’m so glad I did. The features are easy, setting up WiFi (something the old ScanSnap didn’t have) was easy and it’s kind of cool that I can put something in the scanner then scan it from another room!

I’m totally delighted with my new ScanSnap and recommend it to anybody who wants exceptionally good scans every time. I like that I can set the scan size instead of being limited to one of three sizes like the NeatDesk.

It’s compact footprint, great range of features AND WiFi are great improvements but the scan quality is probably the best I’ve ever seen from any scanner including flatbed. I give the Fujitsu ScanSnap a much-deserved five stars for it’s awesomeness and affordability.

I knew it would be good, but I was still blown away with how fast it is. I can scan as much in 10 minutes with the Fujitsu ScanSnap iX500 as I could in an hour on a 2008 mid range all-in-one Brother printer/scanner. I have created a pdf as large as 150 sheets by doing multiple ADF tray loads and had no problems whatsoever. Sometimes if left turned on before it goes to sleep, the wifi sporadically and disconnects resulting in a notification at the top of my MacBook Pro screen (a feature I don't want to disable). It allows me to scan directly to Evernote. It also has text recognition which is somewhat slow, and I had difficulty trying to get it to read another language (so far Latin and Arabic) which resulted in a long time for text recognition. Since it was taking so long I jut opted to skip it. I haven't used text-recognition too much so maybe I just need to download more languages or something.