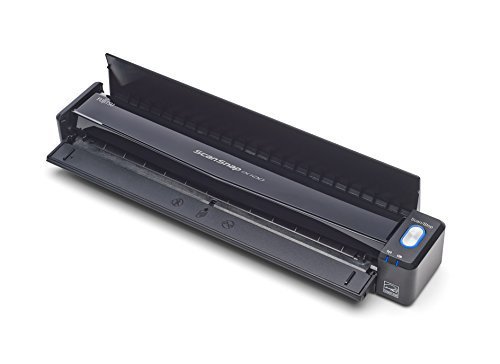 Great mobility but not recommended for large double sided documents

Fujitsu's ScanSnap scanners are known for scanning large volumes of documents quickly while capturing both sides of a document at the same time. Fujitsu's new ix100 mobile scanner does neither of those things, but it might be of value to road warriors looking for a small and light weight device to scan documents on the go.

The ix100 is small and very light weight. It’ll easily fit in a briefcase or medium sized laptop bag. It has a built in lithium-ion battery that’s good for about 200 scans over Wifi and can connect directly to a computer via USB. The battery also charges over that USB cable.

The scanner can ingest a page at 300 dpi in about 5 seconds or so. Pretty fast for a small scanner. It does not, however, take more than one page at a time. The software smartly waits for a confirmation before closing a document, so each inserted page will add to the document being created. This isn’t bad for small multipage documents but could get cumbersome with larger ones.

Another problem is that it does not support duplexing. A double sided document will need to be fed through the scanner twice in order to ingest each side of the page. Again not a problem for a few pages but definitely an issue if scanning a larger document.

The battery also must be kept charged. If it’s completely depleted the scanner won’t operate even if it’s plugged into a computer. I found that a 20 minute charge was enough to get it operating again.

The last issue is that it oddly only allows wireless scanning from one computer. A computer needs to be paired to the scanner via USB first, and then it can scan via WiFi. The process needs to be repeated when switching wireless access to another computer, at which point the original computer will be locked out. The ix100 does support multiple tablet and phone devices so it’s odd that it treats computers this differently.

So yes, this scanner is likely not the ScanSnap you’re expecting. But it makes for a good mobile scanning experience despite its limitations. I would be a lot more enthusiastic about it if it supported duplexing.