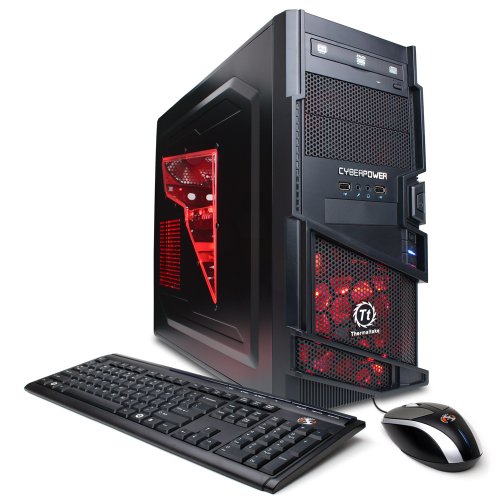 Definitely worth the money!

So first of all, Amazon has a really good deal on this PC and the shipping was excellent as always, the computer actually arrived two days early. When I opened it up, apparently whoever packed everything had thrown the keyboard on top of the PC and used it as padding basically because there was room on the side where it could have easily fit, so the keyboard box was all torn up and smashed but I wasn't planning on using it anyways considering its not very good quality and the same goes for the mouse. Just like everybody else mentioned, the PC runs great and has no bloatware. The only problem that I ran into was the power supply which started making a really high-pitched squealing noise upon shutdown so I called Cyberpower and they sent out a replacement hassle-free. Everybody says that Cyberpower has terrible customer service, but the two people that I talked to were very professional. Overall I would definitely buy from Cyberpower again, as well as recommend them to anybody that is looking for a great PC at an affordable price.

Edit: Everybody mentioned that the gt 520 isn’t a great video card but it gets the job done with most games, just don’t expect to play Battlefield 3 or anything like that with it…although it is easily upgradeable.

Purchased the Cyberpower for my home office, and also so my son can use it for gaming when I'm not working. Office 10 was an added bonus, but what really sold us was the awesome power it unleashes for gaming.. best of both worlds.. amazing price and performance!