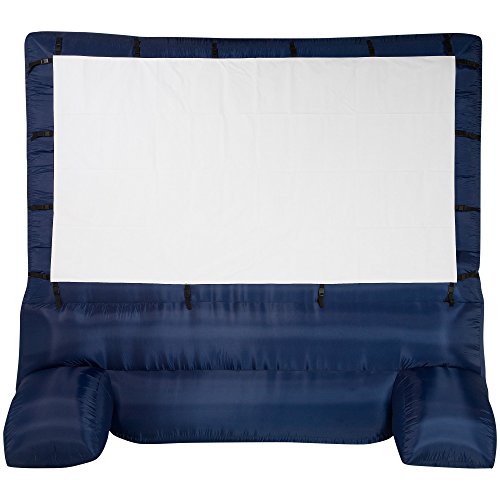 Amazon Review by B. Williams

We bought this about a month ago and have used it twice. It's very simple to put together. It comes with stakes and ties and has 2 fans (one on each side) that blow to inflate. The fans are not loud. I never heard the fans once the movie was playing. The screen does show some wrinkles but you don't notice them at all once the movie is playing. This was worth every penny! We are a hit with the neighbors. Big movie night party every Friday now! This could get expensive. LOL

This screen ROCKS! When I first set it up I wasnt sure if the fan noise would be distracting. I found a pair of 200watt 2.1 THX certified PC speakers that worked out great and did a good job covering up the fan noise. As other reviews noted the screen had a few creases after unpacking. Early in the night the creases were visible but that was a 15 minutes after sundown. After it got a little darker we couldnt find the imperfections even if we tried but Im not folding the screen again. I want to get a big cardboard tube to roll it up for storage. I'd recommend using all of the anchor hardware to keep the screen still. The first night we set up, according to local weather we had 7-9mph winds and the anchor system worked great.

The only problem was the inner-connect wire between two fans. It is mentioned all over in these reviews and can be easily fixed with 4 tie wraps.

Tip
I had to deal with some wires for power and sound running up to the screen and 12 kids running around before the start of the movie. These wires can’t be eliminated but can be tamed to avoid someone tripping on them by taking an old garden hose and slicing it open with a utility knife and putting the wires inside the hose.

@michigan I recommend to buy