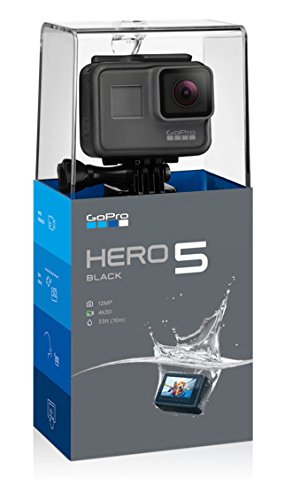 First impressions: This review will be updated as I get more of a chance to play with this camera. I received it Oct 4th so still plenty of playing around to do!! So far I have added 1 additional con, updated some of the pros, and added a few pros.. I will continue to update!!

Short Review: I have owned GoPro cameras since the Hero 2… I have recently been introduced to other brands that work just as well but I am loyal to GoPro and had to try out the new hero 5… I am glad I did because GoPro is now on top of their game again and this is now the best Action Camera I have ever owned!!.. I used to hate all in one designs (Waterproofing being built into the camera) but I actually feel it works very well with this camera and provides much greater protection! No more “Naked” GoPros getting broken! (I have broke a few)

While the Hero 5 doesn’t really have any major improvements in resolution or shooting specs, the improvements that have been made in design and software actually work well and really make the photo and videos appear much better! The most notable improvements include built in stabilization that works very well and much better audio! Audio is where action cameras have always been lacking, but GoPro has made a huge improvement here. GoPro has also improved their user interface which is a great improvement. Old models took a little while to learn, but not the Hero 5… I haven’t seen an action camera this easy to use ever! So even though GoPro has carried over the same sensor from the Hero 4, this camera is very much worth the improvements

1.) Video Quality - Is outstanding. The software changes they made, actually make the video quality look much better even though the same sensor was carries over

2.) Much easier to use interface - No more learning curve! Includes Voice Control

3.) Much easier to use - Thanks to the new interface

4.) Audio Quality - This is the most noticeable difference. The audio quality is simply outstanding

6.) Ability to shoot RAW WDR (Also a Con because RAW is only available on a few options)

7.) GPS - Can now track where your photos are taken

8.) Camera is now much more durable thanks to the built in housing

10.) Battery life is now AMAZING - no more 1 hour battery… I received a full two hours out of all three of my uses so far

12.) I haven’t ran into any bugs YET but I own several Action Cameras so the little quirks here and there, I know how to get around them. I’m not really sure they are bugs, but just how action cameras are

13.) Voice Control - Thanks to Amazon, Apple, and others we now live in a day and age of controlling things with our voice… Voice control is now included on this camera and works well!! This is what action cameras have needed! No longer do you need an app or bluetooth remote to control the camera on a selfie stick… You can now do it with your voice!!

15.) The new GoPro software is better than the past… I like quik and find it to work fine for basic task… I still use Final Cut for most of my stuff!

16.) Cloud - While the cloud is a good idea, and for some this is a GREAT advantage for the new GoPro. YouTube is free so is my Prime Photo account… I will continue to use those but I am very happy to see GoPro integrate a REAL cloud solution for their cameras… I know a lot of people don’t like this decision but it isn’t required to use their cloud. I was a GoPro Plus Beta tester and I found it easy to use… I no longer have the account now that it cost money but I did find it to be very well thought out software!

17.) Still works with most OLD accessories!! Of course you need new batteries and stuff but old mounts, chest straps, selfie sticks, grips, and even cases should still work!! (Like storage cases, not waterproof housings)

19.) Improved connectivity to my phone, much easier to pair and connect than previous GoPros

1.) While I was a fan of GoPro plus I no longer use it now that its out of beta. I wish GoPro would integrate free services a little better to their apps and not require the use of their services for their apps… I would use their apps more often if it was integrated better with services such as YouTube. Final Cut integrates very well with other services, not only Apple Services. I feel that GoPro plus is going to be great for a lot of people, that is why it is also listed in my “Pros”…

2.) The biggest accessory that no longer works that I have a few of, are “Domes” for half underwater photos… Most Domes that I own have an old GoPro housing that you place the GoPro into… Something to keep in mind!

3.) Raw is only available on a few options

4.) The REAL waterproof housing now cost $50. This housing allows the camera to go down to 196FT… The camera HOWEVER IS WATERPROOF already! But only down to 33FT… If you plan to use the camera for scuba this will run you another $50… The standard housing on the OLD GoPros allowed it to go down to 131FT and then 197FT with the dive housing… This is why I don’t really like built in waterproofing… We lost a lot of depth on the hero 5!!

1.) Make sure you grab a high quality memory card to go with this. I personally use SanDisk Extreme but GoPros website list a lot of cards they suggest. Using a card that is cheap or not suggested MIGHT cause freezing, the camera to overheat, or even your videos to corrupt… SanDisk has never given me any issues

2.) There are several Action Camera accessory kits on Amazon that will “Jump Start” your collection of mounts… Remember, this camera has a basic mount but nothing major… I recommend a good kit from Amazon to save you money!

3.) GoPro PLUS and GoPro software IS NOT REQUIRED… I still use it for basic task, and think it works great for basic task but one of the complaints this camera is getting is the new software… I use more of a professional video editing software such as Final Cut and it still works fine. Also, I don’t need GoPros cloud service. YouTube is FREE so is Amazon Prime Photos

Overall: After a few hours of playing with this camera I simply love it and feel it offers great improvements over previous versions! I look forward to updating this review as I play more with the camera.

GoPro did it right

First off, let me say that I have owned every GoPro camera that has been made. From the antiquated original GoPro SD, moving on to the first Hero HD, then the Hero2, the Hero3, then the Hero3+, then the Hero4, and now the Hero5. I cannot say enough good things about the Hero5. Excellent picture quality, beautiful 4k video, stabilization, voice commands, waterproof up to 33 feet out of the box, and more features galore. One thing that some people are not aware of is that with GPS mode on, the Hero5 is recording all data, with that being said, when you edit the video in Quik (GoPro software), you can place the GPS information overlaid on the video. GPS information like the speed, direction, etc.

CONS: Although the Hero5 is a great action camera and the fact that it is waterproof out of the box up to 33 feet is crazy cool BUT one thing that does bother me is that in order to take the Hero5 diving to depths up to 196 feet (I am a certified diver), you have to place the Hero5 into a case that you buy individually. I don’t have an issue buying the case BUT (once again) in order for the Hero5 to be placed inside the case, you have to take off the front waterproof lens, which if the case accidentally gets flooded, your camera will suffer damage and quite possibly be destroyed. Why make a case that you can not just drop your Hero5 in just like you could with all the others ?

Anyways, besides that major con, for divers mainly, this is a great camera.