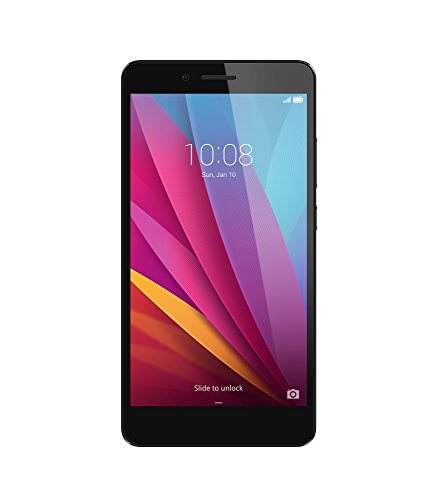 and this is by far my favorite, some people don't like the stock UI but ...

I've had every budget smartphone out, every BLU, MOTO, Sony experia, nexus 5, nexus 6, and this is by far my favorite, some people don't like the stock UI but i think its something new and interesting, downloading Google Now is a must, stock launcher does not have an app drawer . The finger print scanner works seamlessly into the design and functionality, It took me a day to remember to set my finger on the back and it takes .0000005 seconds to read the print to unlock the phone. The screen is super bright and crisp, the only downside is the black border around the display, but its hardly noticeable. The Honor 5X is hands down the best budget phone on the market, it hasn't lagged out on me once and i haven't had an app crash yet. Metal body is smooth and could pass for a HTC A9, I still don't know how this phone is only $199.00, Usually big companies cut corners on budget smart phones as i have found out first hand. the Moto G looks like your playing minecraft with the screen resolution, the nexus 5 was all plastic, every BLU phone has a crappy screen, software, oh and the most important thing, BLU phones come with S*** hardware. I haven't found one corner Huawei Has cut, GOOD JOB CHINESE FELLOW who designed this one, keep em coming. Thanks from Alaska, Im Paul, and please remember [...]

This phone is absolutely fantastic for $199.99.

The 1080p screen is bright and crisp. The aluminum body feels well made and sturdy, and is, at first look, easily visually comparable to phones like HTC M8 or M9. The cameras are above average for the price, and the fingerprint scanner is SUPERB. It is incredibly fast, and can be “programmed” to execute several useful features, such as taking a picture, pulling down the notification shade, etc. It is, hands-down, my favorite feature of the phone. Sadly - the ONE thing I wish this phone had was NFC. I have been using Android Pay recently, and with this excellent fingerprint scanner, would’ve loved to use Android Pay with it. No luck.

The Emotion UI skin that Honor uses is in some ways, a bit like iOS. I’ve owned iPhones and don’t mind iOS. There is no app drawer. People seem to freak out over that - why, I’m not sure. If you want a more traditional “Android UI,” download Google Now Launcher or Nova Launcher.

Easily worth the money I paid for it. - and in a few ways, comparable to many higher priced phones. After purchase, this has reinforced my belief that most mainstream users (myself included) would be perfectly happy using this phone, saving themselves a lot of money over current flagships. My two most recent phones were an IPhone 6s and a Galaxy S6 Edge. This phone does about 85-95% of what those phones did – while only being a third of the cost. $$$$$ savings is worth it.