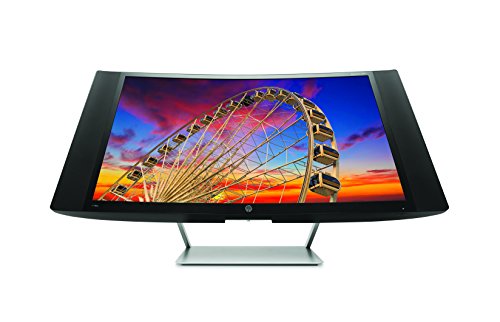 Amazon Review by Jackson B.

This monitor is a great mid-level option. I consider it mid-level because it is better than the less expensive HP monitors, but it is not in the same league as the $500+ ENVY or the $900+ Spectre monitors. I chose this display for a few reasons: it has built-in speakers, it includes an HDMI cable (appx. 6 foot), it has 300 nits of brightness, it has a semi-gloss finish, and it looks classy. The built-in speakers are not incredible, but I did not expect them to be. I just didn't want to have to buy separate speakers. If you're planning on listening to lots of HQ music than you'll still want dedicated speakers. But for watching Netflix movies and YouTube videos the speakers in this display are perfectly adequate. The included HDMI cable is just a nice bonus. The brightness is important - most of the other monitors I saw were 250 nits. If you're planning to use this in a room with lots of natural light, you need all the brightness you can get. Furthermore, the semi-gloss finish of the screen helps to mitigate glare (again a must for rooms with lots of windows). Lastly it's just a damn good looking monitor. The curve is very subtle, if you're worried that it will look silly I can tell you it is a very slight curve. Honestly most people wouldn't notice the curve upon first glance. I don't know if the curve adds much, but it is not something to be afraid of.

If there is any “catch” with this monitor, it’s that 1080P resolution starts to look a little jaggedy at 27 inches. I specifically wanted 1080P because my PC is a few years old and cannot output any resolution higher than that. But if you have a newer PC capable of outputting higher resolution, I would suggest investing in a higher resolution monitor. The resolution on this display is fine, but in a world where 5" smartphone screens are 1080P, a 27" screen is noticeably less sharp.

Some people have said the stand is a little difficult to set up, but I had no problems with it. You do kind of have to man-handle it when attaching the base to the back of the screen, but it isn’t too challenging. The display does wobble a little bit when you’re adjusting the angle of it, but it will stay still when you’re not messing with it. All in all though I would definitely recommend this display. It looks great and I love how the pedestal allows you to sit things on it (unlike some monitors which have an awkward shaped stand that just unnecessarily takes up space on your desk).

Good for the price, but a notable problem

For the price, this is a good monitor. The graphics are good. The side speakers have very good sound but there isn't sufficient power to raise the volume sufficiently. Somewhere it says this monitor can be wall mounted using the HP mounts, but the HP mounts do not list it as being supported so I didn't buy a mount to see if it would work. The monitor ships without a manual and the controls are not obvious, but a picture showing the controls was easy to find on line.

Never again will I squint. The monitor is practical and functional. I watch a lot of sports; I see the golfball take flight and before it lands. This is an exceptional viewing experience.