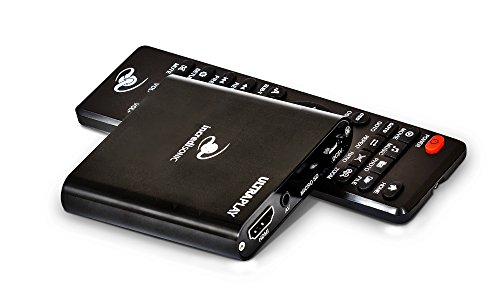 A handy and surprisingly portable media player that will be able to handle 99% (if not all) of your collection.

First thing first - this is NOT a network enabled media player. This won't stream videos from the internet. It's sold as a media player to play your personal media files only. And it does it well.

The biggest advantage of this media player (and my biggest surprise) was how small it was. It’s hard to tell from the product photos, but the actual player is small enough to fit in the palm of your hand, making it excellent for travel or for moving to different TV’s.

What I thought was another great plus is that the player is powered by a 5V, 2Amp Micro USB power cable, which is included. Since it’s a non-proprietary port, I was also able to run the media player off one of my own USB wall chargers (Please keep in mind that a 1Amp port will not be enough to power the player. I’ve tried.) The player also comes included with a simple, lightweight remote control (two AAA batteries are not included) and RCA AV cables. I didn’t test the AV cables as I used an HDMI cable (not included).

Until now, I was using my old Xbox 360 to play video files off the USB stick. While it did well to support most formats (except for .mkv), it was a bit of an overkill, used up a lot of power, and really heated up my room. I’ve been looking for a simple, standalone media player that could handle my files. The IMP150 does a good job at it. I tested it on a variety of different video, music, and photo media files and it was able to handle everything well. I played files off a USB flash drive, a USB-powered 2TB backup drive, and a powered USB SATA dock. I noticed that with the USB-powered external, there was a little bit of lag at the beginning of each video file, but quality evens out very quickly and files are perfectly watchable.

The only thing I’d wish for is for the ability to skip through larger blocks of time. This is minor though, since the remote’s rewind and fast forward have 2x, 4x, 8x, 16x, and 32x speeds. Also, if you stop a video halfway through and re-open later on, the player does give you the option to resume from the point where you last left off. The player’s interface is simple and to the point, and while not the prettiest, you’re only really using it to play your own files anyway.

Overall I’m happy with this media player, especially for it’s portability and ability to tackle virtually any media file I threw at it.

I received this product in exchange for my unbiased review.