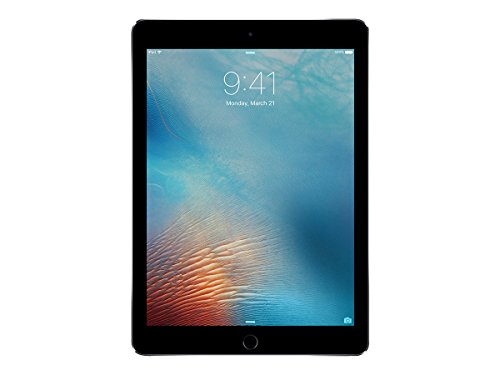 Amazon Review by Sally B.

My last iPad was the third generation and that was 4 years ago. Now it has gotten old and slow. So, two months ago I started to look at new devices. Surprise! My husband bought me the 12.9" iPad Pro. Very nice device but BIG!!!! So hubby took over the new IPad and I waited until the latest iPad Pro 9.7" was released. The 9.7" Pro is a bit narrower than the old iPads but has the same sized screen. Unless you have really big hands and long fingers the 12.9" Pro is unwieldy to hold as a tablet and to type. Also, the 9.7" Pro is much lighter weight than the older models full sized iPads and the same weight as the iPad Air. The graphics are exceptional as is the upgraded 12MP camera. It will not take the place of a DSLR camera for the camera buff but for me, who loves to take pictures of family, pets, and items to list on eBay, it is awesome. There is another feature that the camera does which is called a "live" shot. It is not a video but a mini snipit of about three seconds. This feature literally brings a picture to life. You hold your finger on the shot and it comes alive. It is the difference between taking a picture of a child as they blow out that first candle on their cake and actually seeing the child blowing it out. Amazing! As an long time iPad user I knew that I would need at least the 128GB for my apps, updates, pictures and music. Even though we subscribe to a 200GB iCloud storage plan it is amazing how quickly all that data takes up space. It would be a real shame to buy a device and skimp on something so basic. My first iPad did not have cellular and that was a big mistake for me, personally. Public wi-if is not secure so I was limited to take a risk and use it or go without. It was a real bummer when we lost power!!!!! Most cellular plans will let you hook up to 10 devices for $10 dollars each a month. This is a small price to pay to always be connected and to have your identity protected. Will this take the place of a desktop or laptop? For me it does 99 percent of the time. It is perfect for social networking, skyping, uploading pictures, writing documents and printing them off of a wireless printer and, of course, on-line shopping. If I was still in grad school or running a business then I would probably need a laptop or desktop. As with all Apple products they are intuitive. The set up is a breeze and if you have an issue the Apple support team is just a phone call away. I am loving my new iPad 9.7 Pro and I know you will, too!

Thanks for reading my review and for pressing the “helpful” button if it was helpful to you. If you have questions and I can help please do not hesitate to write to me.

Since I raved about the camera I thought I would share a couple pictures I took of my cat and also of my new iPad!!! I also added two pictures of my living room. The second one is taken with a panoramic setting.

I've been an Android fanboy since the first generation of Android phones. I've tried high end and low end Android tablets but have always been left underwhelmed with the performance. I wanted something I could flop on the couch or in bed with and browse the web/soci" media without having to stay plugged into a charger. So, I finally said enough is enough and decided to see what the fuss is about with the iPad.

I’m really glad I did. The iPad always has snappy performance and it doesn’t get bogged down the more you use it. Web pages load effortlessly, multiple apps run without causing problems with each other, the screen is beautiful, and speakers are great for a tablet.

The ipad has always been a good and reliable device. It's a great communications and data device. The friendly and powerful user interface is a breeze to use, it has great display, and an even greater camera making this an excellent device for beginners and advanced users alike.

I chose this over the ipad air 2 mainly because of the camera. The 12 mega pixel camera with image stabilization and live photo takes great photos and videos. At family events, we often like to take pictures and review them instantly. After we’ve reviewed them, they’re ready for uploading and sharing. The ipad combines these features into a sleek and easy to use package.

The speakers are a great improvement over previous designs and the apple pencil shows great potential for creative projects and note taking. Battery life is also very good and I think that the ipad pro 9.7 is and overall excellent upgrade from its predecessor.

I ordered the ipad and had it sent to my house. There were no problems or issues with the delivery service. My rewards points were posted after the return/exchange date was reached and I suggest increasing the reward points to certificate conversion threshold value in order to maximize your certificate worth.