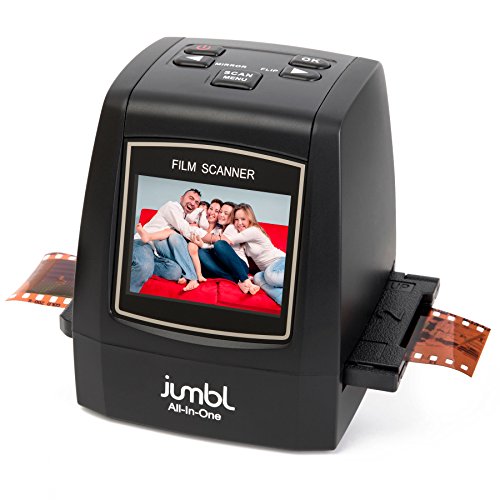 I have thousands of color slides that I took from the late 1960s through the late 1990s, when I ditched film for my first digital camera. Sometime in the early 1990s, I bought an expensive Nikon slide/film scanner to digitize some of the slides, but as time passed, it became hopelessly slow and out of date with its serial port connection, as well as having very clunky software. Last year I reviewed an earlier-model Jumbl scanner, the Jumbl High-Resolution 14MP Scanner/Digitizer - Converts 35mm Negatives & Slides to 14- or 22-Megapixel Digital JPEGs. It gave good results, not nearly as good as a professional slide/film scanning service would give, but the results are immediate, and most deficiencies in the quality of the scanned image can be adjusted with photo editing software. The most obvious differences are less color depth and less shadow detail than a more expensive scanner would have.

The scanner is easy to use after a brief learning curve. If you’re doing a lot of scanning, you’ll need to insert an SDHC card to store the files on. If you’re only going to do a few scans, the scanner has enough built-in memory. If the scanner is connected to a computer through a USB port, you can transfer files to your hard disk directly, otherwise you can remove the SDHC card and insert it into a card reader. A USB port provides enough power for the scanner, although it can also be powered as a standalone device with the included AC adapter.

After scanning, you can adjust the exposure and RGB values before saving the file. For the most part, I left these alone, preferring to do color correction and fine-tuning the exposure in Photoshop, which is easier and more accurate to use than the scanner’s fairly clunky adjustments. The results of the scanning were generally acceptable, although shadow detail was not very good (but it was partly correctable in Photoshop). With 35mm color slides and 14MP resolution, file sizes were about 2MB. (The file sizes can be reduced substantially in Photoshop.) The actual size of a scanned 35mm slide was 4608x3072 pixels.

The scanner has a nice collection of adapter trays for holding slides and film. The trays are easier to use than the ones that came with the previous model.

One complaint: When you turn off the scanner and turn it back on, the type of film defaults to a color negative with a resolution of 14MP. As nearly as I could figure, I don’t think you can change these defaults.

Overall, I give the Jumbl scanner pretty good marks for ease of use and speed. The quality of the scanned images is not as good as with name-brand scanners, but those scanners typically cost $1,000 and up (mostly up). If you need to preserve your slides and negatives and use the image files in digital devices, and you don’t want to pay a fortune, the Jumbl scanner may be a good choice.

A product sample was provided for evaluation and review.

While I have only used this scanner for my 35mm slides if it preforms as well with my super 8mm film I will be pleased beyond believe. in less than a week-end I scanned and transferred over 800 35mm slides that I had taken in the mid 60's to the early 70's I thought these pictures were lost forever. attached is an example of the finished product.