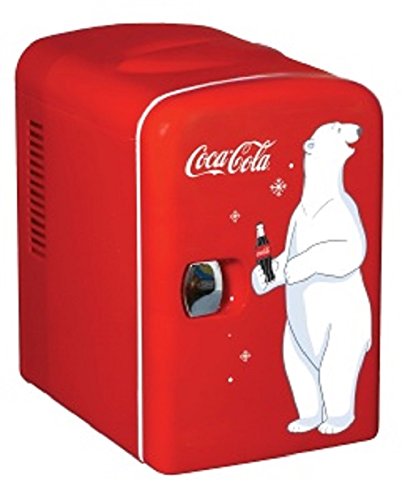 Noisy but very effective cooler - but TOTALLY SILENT after an easy fan replacement.

The reviews seem to split on two issues - is it noisy, and does it cool effectively? If half the reviews were right, it seemed perfect for my desk, because I need a way to have drinks (cold soda, or hot coffee with milk) without having to stop for a long trip to the cafeteria. So, I took a chance.

First, on cooling: I think some people are confused about how a thermoelectric refrigerator works. “Normal” refrigerators cool food by cooling the air and blowing it around with a fan, or in some cases by cooling all the interior walls. Since the air and walls have a low thermal mass, refrigerators work BEST when they’re mostly full of cold items. So, in general you want to keep them full or almost full, and in small ones if possible you want to pre-cool the items before putting them in (unless you have a lot of time available to remove all that heat.)

This refrigerator has two zones - a metallic surface from the back to about 2/3 of the front, and a plastic zone at the last 2" near the door. The cooling ONLY occurs through conductivity at the metallic surfaces, so that’s where you want to put milk, dairy products, etc. If the refrigerator is full, the food near the front will be cooled by contact with the cold food in the back, and by the cold air between all the cold foods, but it won’t get as cold as the food in the back. I think that’s what’s causing the “this isn’t cold enough” reviews - the sodas and milk I put in the back are VERY cold. (I think they designed the fridge for cans to lay on their side, so the back and front wouldn’t have different items. But that won’t work on anything but 12 ounce cans.)

Now, about the noise: Very annoying and loud whine. It uses what looks like a cheap, noisy 80mm square computer case cooling fan, 20mm thick, drawing 0.15A at 12V. There are many much quieter fans out there, but that thickness is hard to find, I just ordered a much quieter 25mm thick one, and I think there’s enough clearance that it will work fine. I also ordered noise-suppression screws - the whole thing was less than $10 plus shipping. The important thing is that the replacement fan can’t draw more current than the original. Will it work? Stay tuned - I’m going to update after I put it in and, if it does, I’ll give the model info and some assembly tips. (If it doesn’t work, I’ll learn to live with the noise.)

Update 3/8/13: I just replaced the fan with a quieter one, and the fridge - which still cools very well - is now totally silent. I’m changing the rating to five stars, based on how cheap and easy it was to do this. I sit about five feet away from it in my office, and I can’t hear anything at all now. Before, the noise was a steady whine that I sorta kinda got almost used to, but now that it’s totally gone I can tell from its strong absence that it was an ever-present annoyance. Seriously, I have to check the light to make sure this thing’s on.

So, here’s what I did: I bought a Coolink SWiF-801 80mm Quiet Computer Case Fan from QuietPCUSA (online), which sold it for $4.95 plus shipping. (In Amazon, searching for that model brings up a $30 alternative.) There are many other fans and other vendors to choose from, but any you pick should be (1) 80mm square, no more than 25mm thick, (2) DC12V and a MAXIMUM of 0.15A (the one I bought about half that amperage), (3) specifically rated as quiet - this model claims 11 dB, and (4) have reasonable airflow and RPM (this one claims 38 cubic meters/hour at 1500 RPM.) Frankly, you might do better but at five bucks and near-total silence (vs office background) it’s hard to justify the effort to try.

I’m not a super-DYI guy, but I got a couple of small wire nuts, a small flat-head screwdriver, and borrowed a wire stripper. The back comes out with eight small screws. The fan comes out with four small screws. The new fan’s cable had a connector at the end - I cut it off, cut back the outer sleeve and exposed a couple of inches of the wiring. The yellow wire can be ignored, it’s for speed control and the Koolatron’s original fan - which I removed with a small flat-head screw driver - only has a black and a red wire. I cut off the original fan’s wire and very carefully cut into the wiring insulation to expose the thin metal wires inside. Then I pulled on the insulation with my fingernail, exposing about an inch. Did the same with the black and red wires in the new fan, stranded the like-color ends together, bent the exposed wires in half, connected them with the wiring nuts and then screwed the fan back into the back.

I’d bought “anti-vibration fan screws” but they aren’t suitable for the Koolatron case, so that was three bucks wasted. I cut out four small squares of thin rubber and placed them between the fan and the case, using the screws to make a tiny gasket. (Chances are, that’s not necessary, but I’m not taking it all apart to check.) That’s it! Just two wires and twelve small screws, about fifteen minutes if you’ve ever stripped a wire and used a screwdriver.

Ok for my purpose

The fridge is exactly what I wanted - a small fridge for my upstairs coffee station. And the room is Coke themed so perfect, however the fridge runs all the time and has a continual motor/fan noise. Where I have it, this is not an issue but wouldn't recommend for a location that you didn't want continual noise.

With no condensor, compressor, or evaporator, I didn't see how this thing could produce cold. Somehow it does though, very well actually. Its also very conveniently sized, allowing you to bring it anywhere, even in the car with the included car outlet power cord. That's right, a refrigerator in your car. I can't believe you haven't bought this yet.