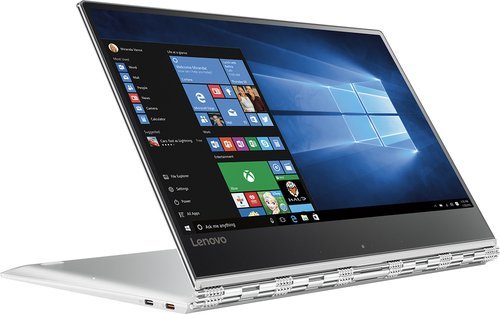 ALSO track pad is amazing. just like macalike. This laptop is also 360 turnable. which is a huge plus. during skype i mostly do upside down V and when i browse 9gag or news i just hold it vertical.

Im extremely happy and would definately reccommend this laptop.

Best 2-in-1 ultrabook out there!

Disclosure: Lenovo Yoga 910 as part of the Lenovo INsiders program. All opinions are my own. The Yoga 910 refines essentially every flaw on last year's Yoga 900; with a drastically better keyboard and trackpad, larger display, smaller bezels, and much better battery life. Even though the Yoga 910 is 13.9" (almost an inch larger), it is the same exact size as the Yoga 900, meaning the sleeve for my Yoga 900 fits the Yoga 910 perfectly. Design- Just like last year's Yoga 900; the Yoga 910 has the same beautiful watchband hinge. The Yoga 910's hinge is actually much sturdier than the Yoga 900's hinge; which means that moving the display has much less wobble. This year though, the entire machine is made of metal. The sides are made of shiny, chrome metal, and the inside is covered with the all-metal unibody design. Resting my arms on the metal chassis feels great, since it's cool to the touch. Don't worry about the metal scratching; there's no scratches during the time I used it, and it's been carried in a backpack with a laptop slot. Also, the fingerprint sensor is super fast and responsive, awesome add-on. Performance- It's got the Intel Core i7-7500U processor, up to 16GB RAM and up to 1TB PCIe storage. It's as top of the line as any ultrabook this range gets. It zips through whatever I throw at it. I edited multiple videos on it, and noticed no glitching or stuttering. I was able to stream YouTube while rendering a video, and even though the fans kicked in a full throttle, the system still didn't stutter. Speaking of the fans, I noticed in the beginning that the fan was always on, even though I wasn't doing much. There's a BIOS update on Lenovo Support that drastically improves this: I barely hear the fan when I'm just web browsing or editing documents. The only time I hear it is when I stream videos or edit/render video. Keyboard & Trackpad- The keyboard is much more clicky and gives you more tactile feedback than the Yoga 900. The left shift key is also larger, but the right shift key is a bit on the short side. I got used to it in a few days, and I'm able to type my typical 80wpm on this keyboard. I could see writing a paper or essay very enjoyable on this keyboard. There's a huge improvement on the trackpad. This time, it's a Microsoft Precision Trackpad, which means you get a lot of gestures that you didn't get before. More importantly, scrolling, regular trackpad usage, and zooming is miles better than the Yoga 900. Everything is smooth, just like using the touchscreen. It's pretty amazing the drastic difference the Precision Trackpad has over the non-precision trackpad. Display- It's about an inch larger than last year's display, even though it has the same dimensions, because Lenovo cut down the bezels. Texts and photos are extremely sharp on the UHD display, and the display get very bright. I had no issues using it near direct sunlight. The colors are vivid, and it has a high contrast ratio that leads to crisp details. Battery- It has a 78Wh battery, which is 30Wh larger than the Yoga 900, and is considerably larger than the competitors out there. If you're really power hungry and need a lot of battery life, you should go with the FHD model. Lenovo says up to 15.5 hours with that display. I have the UHD model, in which I get 8-9 hours of mixed usage. Of course, the UHD display takes up more battery because of all the pixels it has to push out; but it's entirely up to your needs. Audio- The two JBL speaker with Dolby Audio sound pretty good. There's a Dolby app preinstalled that allows you to change what mode you want to be in. There's movie mode, music mode, game mode, and voice mode. You can also personalize it to your liking. Dolby also adjusts the audio output when you which modes, and by that I mean laptop mode, tent mode, tablet mode, etc. Tons of modes! Webcam & Microphone- It has a 720p HD camera with dual-array microphones. The camera looks good; but since it's located on the bottom, typing during a video call would block about one-fourth of the camera viewing angle. Since it's a Yoga, I suggest propping it up into either tent or stand mode, and use it that way. Conclusion- It's the best 2-in-1 ultrabook out there. It's by far the best looking out there, but also has top of the line performance, a wonderful display, amazing battery life, and an amazing unibody metal design. I'd say the only thing to really consider is FHD vs UHD. If you need the laptop to last a really long time on a charge, the FHD is the best option because you get 15.5 hours of juice. Otherwise, the UHD is the way to go.