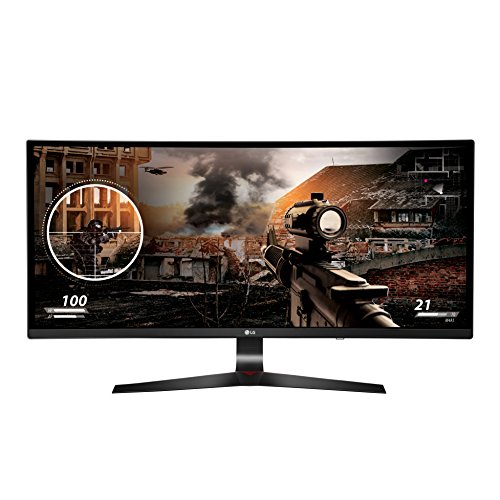 A near perfect balance of price, performance and features.

I have been on the market for an ultrawide monitor for quite some time now... and being one of those production minded gamers, finding the right balance between performance and image quality in an ultrawide has not been easy.... Until now.

Ok lets get onto the good stuff. At the time of writing this review, the display retailing for less than $599 USD. Toss in the fact you have a 34" IPS panel (21:9), 144hz refresh rate and a pretty solid resolution which helps it achieve those high refresh rates… It is pretty much one of the most competitively designed displays on the market right now. For me personally, the resolution is perfect since not all the software I will use will scale well with a higher resolution and 2560x1080 is overall less taxing on your graphics card.

LG may not have known it at the time, but this combo of features resonates very well with those of us who dabble in both work (content creation) and play.

For a product almost half the price of the competition, you kind of expect some corners to be cut when it comes to quality. I am happy to say the build quality left me surprised. Everything was extremely solid, nothing felt cheap. (highfive!)

Design wise, they chose to keep it simple. There are no flashy LED lights, no arbitrary plastic frills… just an edgy black frame with some red accents here and there. I do kind of wish there was some content/audio sensitive use of LED lights (As seen with Samsung’s new CFG70 display) but over all, its a minor want based on personal taste.

While I originally intended to use one of my VESA mounts, I ended up liking the black and red stand so much that I opted to use it instead. It was simple to assemble, just hook in and it clicks into place. A button on the back will release it from the back the monitor. The legs come with some screws attached. A quick flick of the wrist and the monitor was assembled. Very little perceivable wobble. Well done LG.

In case you are wondering, the IPS panel was free of dead pixels. I also did not notice any significant light bleed… however that did change the longer I used the monitor.

After about 6 hours, the light leakage was noticeable. Unfortunately its something a bit too normal with these kinds of display. The good news is however that its not nearly as bad as what some of the Acer and Asus monitors showcased, but it is still there regardless.

One peeve I have with the monitor involves the on screen controls. Rather to be more specific, the behavior of the game toggle they added to the on screen controls. There is a quick access for game related options, which is great, but it also changes the profile… and for me I want it to stay on the default custom profile. This means you have to go back into the more advanced settings and switch it back. Its a minor annoyance but something I would love to see fixed in some firmware updates.

Another awesome feature (for me at least) is LG’s desktop controls. Basically you can control the settings of your monitor from within Windows, which is great if you don’t want to fiddle around with the nob underneath the LG logo.

Conclusion… this is a great product with some minor flaws that are easily overlooked due to its competitive price point.

TLDR
Its a very competitively designed display that not only looks good, but delivers on the best balance of performance, features and price. Hard to go wrong with this one.

Great monitor with outstanding colors and speed. Software is lacking [This review was collected as part of a promotion.]