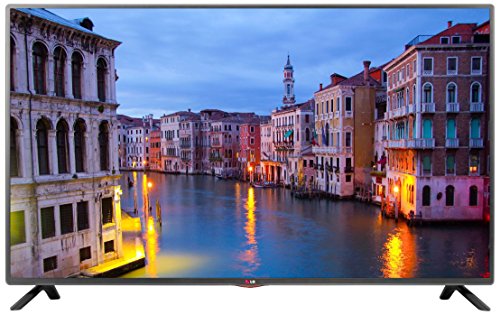 Heres my review of the lg 42in LB5600. This tv is amazing , sound quality is astonishing, no need for a soundbar!! , picture is remarkable right out of the box , no need to fiddle with settings( a quality tv you shouldnt have to) , Im currently running a Roku XD with HDMI cabe and a a 1080P upconvert dvd player with HDMI cable. I will note this tv showed not in stock a my Wal-mart but there was 4 of them on the shelf, I took a chance and Im glad I did. Im surprised Im the first one to review this tv it truley a hidden gem in the age of bigger is better. Ever wonder why you can get a cheapo 50 inch tv for a few dollars more? Put then side by side and you will know why , they aint even in the same leauge with LG LB5600.. Would def recommend.

while at the same time maintaining a good, dark black

I'm very impressed with the performance of this TV. As this was our first flatscreen of this size, I had gone into the search with quite a bit of apprehension. However, after a bit of researching and comparing picture quality of various models in various stores, we decided the LG was probably the brand that would give us the smoothest, most realistic picture, even with our older SD videos, while at the same time maintaining a good, dark black. I have not been disappointed.

After a few months of use, I’ve had a few small issues surface that probably should be mentioned:

The video ratio is not as smart as I would like. For regular composite video feeds and the like, you’re given a number of choices like 4x3, 16x9, Cinema Widescreen, Zoom, and Program Preferred. I’ve found that for almost every single one, the picture seems somewhat distorted (usually stretched horizontally). The only setting that’s worked without any such issues has been Program Preferred. However, in most cases (720 resolution and below), this sets the video size of the screen anywhere from 3/4 to 1/2 full with giant borders.

The Zoom ratio setting seems to be okay, just so long as the analog video you’re dealing with is a perfect ratio with the monitor, and thus will reduce any clipping that would otherwise occur.

For digital video signals (HDMI from a laptop), the ratio list goes down to 3x4 or 16x9. And instead of zooming and clipping, it instead just outright stretches the video to fit. A bit annoying, but only is really a problem with videos that haven’t been cropped correctly such as converted widescreen VHS that had the top and bottom borders.

The nice thing, though, is that the HDMI port installs itself as display and audio devices on the connected computer, so it will act like a second, full-resolution monitor and a secondary sound card for a nice bit of control.

Another small issue I’ve found is that the master black is only really ideal when the color is set to Auto Power Save (APS). All the others tend to inject just a bit more grey into the picture. However, in APS mode, the rest of the picture is also a bit dim.

Menus are not too hard to figure out. However, it seems like the Quick Menu doesn’t have nearly a short enough timeout (if any at all). When changing ratio or color or a number of other items, this menu will remain open until you explicitly click down and Close. This is just a tad annoying, especially when other smaller menus (such as Input selection) pop up when used and close within 5 seconds.

Screen reflection, while still fairly high, is somewhat reduced, which I’m happy about. While it’s not a nice, non-reflective matte finish, it does have a bit of a softening effect that blurs the windows and lamps in the room. However the shades do still need to be pulled before sunset.

The legs seem a bit flimsy when first unpacking. However, they offer two points of anchoring to the rear of the TV: one hook and one screw, and once fastened on it is quite sturdy.

There’s also some sort of 1/8" TRS jack labelled “Service Port” on the side which I’d love to know more about.

What’s a bit annoying about the side jacks is their accessibility from the front. They’re positioned some four inches in from the edge of the screen, and with our setup (currently a 7-foot bookcase with a deep recess and a few inches to spare on either side), it is very hard to access the side HDMI port if you want to swap out the Chromecast with a standard HDMI patch cable for a laptop. In most cases, I have to physically grab the bottom edge of the TV and rotate the entire thing out, balancing it on the now-rear leg as I fumble around with whatever device or cable is intended to be connected there.

In fact, I just got the OK to start shopping for an HDMI switch box. However I’d rather this not be such an issue.

Speaking of connectors, there is one nice thing which is not mentioned in the Amazon listing (a feature I imagine is nowadays standard enough that it’s never mentioned anyway). That is the F-type coax connector. While we have horrible TV reception in our area and pretty much forgot about it when everything went digital a few years ago, it’s still been nice to be able to hook up the old gaming consoles or the 20yo bowtie antenna to watch our only channel: Fox Deportes (which I understand 0% of and could live without anyway). However, it was nice to see it included when one of my unanswered wishlist questions was “can I play my Atari on this? 32-inch Pacman would be so cool!”

In terms of inputs, a goofy and somewhat annoying “feature” is the TVs ability to detect a new connection. You hot plug the HDMI2 or USB device, a fun little window pops up informing you that “A new device has been detected on HDMI2. Would you like to enjoy this new input?” Enjoy? Seriously? No, I actually just connected the new device for no reason at all.

Second minor annoyance is the big red Off light on the bottom edge of the screen. When the screen is turned off, this red light, although not annoying at all, illuminates and at least in our house has caused more than its fair share of confusion and has made us wonder, “is this thing REALLY off? The light is on, so it must still be on.”