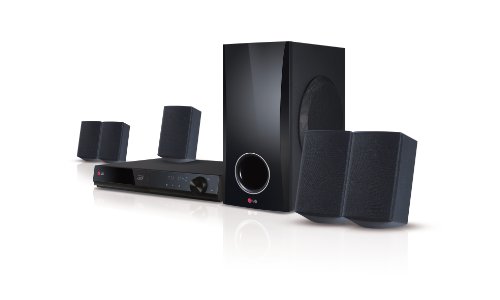 Great package getting me all I was looking for

For months I've been looking for an LG soundbar and 3D blu-ray player package. I recently purchased an LG 3D tv and was looking for a perfect pairing. I currently have a similar setup at 1000 watts Samsung surround sound, but no 3D blu-ray. I just happened to stumble upon this one in store and the speaker setup fit better in my entertainment center than a soundbar and had 4x's the power! I also ordered it online for $20 less and did site to store. Picture and sound are within what I expected. Superior base from the sub. I just wish they had a wireless or bluetooth setup for the rear speakers like my current setup. This will make for many great movie nights.

For the price, this LG Blu-ray player/5.1 audio system is a pretty solid, budget-conscious choice. The product specs are clearly and accurately described on in the official Amazon listing, but in short - this is is a basic 3D Blu-ray player (2D Blu-rays and standard DVDs are of course also playable) that has center, two front, two surround, and subwoofer speakers hard-wired and ready to plug into the player. This type of system bypasses the need for a receiver, for better or worse. As stated, it's 500W and the audio quality, while far from top-notch level, is acceptable given the relatively low price.

Set-up really couldn’t be easier, though that convenience comes with its own set of downsides. Since the speaker wired are pre-installed, permanently connected to each speaker, you’re stuck with them. And they are very low-grade speaker wires. Also, your speaker placement is dictated by the length of these pre-installed wires. This system is ideal if you have a relatively small-ish living room or are using it in a smaller room like a bedroom or study. Also, the fact that the rear speakers are wired is a pain in and of itself. Yes, wireless rear speakers are a premium but you may want to consider going with a more expensive system in order to have them.

So the plug-and-play set up makes it easy to get things ready in well under an hour. But the biggest drawback of the set is that it requires an ethernet cable for internet access. Yes, the unit is compatible with Smart TVs and you can utilize Netflix, Amazon Instant Video, or your service of choice - but you’re not going to do it wirelessly. For me, wireless is pretty much a bottom line requirement for me to consider investing in a home theater system, so I honestly believe that it is worth considering a pricier system in order to secure this convenience (especially if wireless rears are worth it to you as well).

Bluetooth compatibility with your smartphone is a nice feature, however, and will allow you to utilize the nifty Private Sound Mode (stream audio through your phone, listening via headphones). But honestly in this day and age, with streaming becoming the norm for more and more viewers rather than disc-based media, it simply does not make any real sense to buy a non-wifi system. The one exception I guess is if you are planning to set this up in a room where you already have your modem set up and therefore don’t have to run a cable out of the room and into wherever you use the system. And even then, you’d need to be pretty certain that’s exactly where your sound system will be staying. It’s bad enough to have the rear speaker cables running across the floor, nobody wants an ethernet cable running all through the house.

You get reasonable sound for the money.

Love the simplicity of it and delivers good overall movie sound experience.