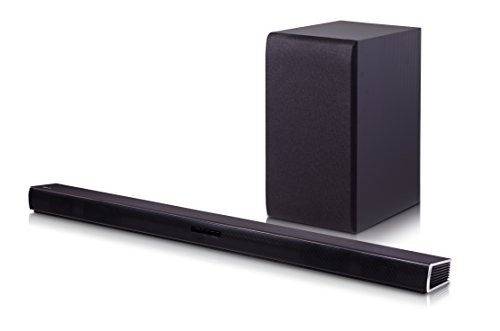 Ive been using this for a couple weeks now, and this sound bar is great.

I tested a bunch of different sound bars at the ~$200 price point, and subjectively, I was torn between the Samsung J/K 450s, Sony CT80, the LGs (LAS454b and SH4), and Vizios. I decided against he Vizo because of the cloth cover & I had a lot of issues connecting to it via bluetooth, and against the Sony because its speakers tilt upwards and I already planned on mounting the sound bar above the TV. Subjectively I would have ordered it Samsung/LG, Sony, Vizio. So it came down to the Samsung and LG, and the LG went on sale.

My first impression of the sound bar was really good. It looks really sleek. I like that the branding isnt obvious from the front, which is covered in a nice metal grill, and it just looks like a high quality piece of equipment. The subwoofer is also solid, and its mostly hard on the outside (I think its a nice plastic), so it should be easy to dust off. Once I had it out of the box, it took me less than 5 minutes to have music playing. The subwoofer automatically connected the first time I plugged it all in so I didnt even have to press the pairing buttons. As for the sound, it gets very loud. It can fill my living room and attached dining room very nicely, and I can turn it up all the way and it still sounds crystal clear. These sorts of things I think are subjective though, so you should really listen to it yourself.

As for the other features, the bluetooth works really well. I have a 3 bedroom home with a living room in the middle of the house and I can stream from anywhere in the house without issue. It has all the inputs I need, which worked out really well for me I discovered. I considered getting the LAS454b, which doesnt have HDMI. I found out my Sharp TV doesnt forward audio from HDMI inputs to the optical output, so I ended up needing the HDMI to get blurays and the fire tv working with the sound bar. This is probably only an issue with my TV, but the HDMI input did come in handy. The sound bar also has some nice features that I didnt look for, but happened to be included. There is a night mode feature that evens out the volume. This is nice since we have a baby, and it turns up dialog, but turns down loud explosions in tv shows. It also has a nice auto-on feature that will turn the sound bar on and off automatically, which I really like when I throw music at the speaker from my tablet, and it automatically turns on. Some might also like that the tv remote sound buttons can adjust the sound bar volume, but I turned that feature off.

There are a few nitpicks I have. First, the auto on feature doesnt work with HDMI. Its not meant to according to the manual, but it would be nice if it did - it works for bluetooth and optical in. The other is that the front panel doesnt display as much information as Id like. The mode is displayed as one of several dots on the front. I had to learn them, and I cant just tell a friend to switch it to HDMI, I have to explain, go to the last dot. Id also prefer more control over the equalizer settings, but since you can control the subwoofer this isnt a big deal, but it would be nice if the phone/tablet app let you do this.

Since I decided Im keeping the bar I will mount it soon, but so far Im very happy.

UPDATE/EDIT: After using this soundbar for 6+ weeks, I have some issues with how the display works (but not enough to lower the score). I realized the auto-on feature doesn’t work with bluetooth, it was actually that the bar was on the whole time. The red dot on the display only shows when the soundbar is off. The display shows for several seconds after the soundbar is turned on, but then it goes to “sleep”. It’s nice to have it off for watching something at night, but it’s confusing at first since it makes it seem like the soundbar is off.

Also, it’s mounted on the wall now. The required hardware was included except for the wall screws, and it was easy to do. It’s been up for about a month with no issues and it looks really nice on the wall.

Bought the LG SH4 yesterday. Took about 15 minutes to set up- very easy. Sound it pretty good especially when compared to the LG TV output. I like to watch tv video and listen to music.The blue-tooth worked first time with my. ipad. Overall very happy. [This review was collected as part of a promotion.]

Stunning sound in the bedroom, now!

Four years ago, I bought, what was then, a state of the art A/V system so that I could enjoy watching films in the living room. I've never quite been able to get comfortable in there. So I purchased a Sony 55" 4K Ultra HDTV, had it mounted in my bedroom and found the picture quality superb; but the sound? Meh...

Years ago, I had purchased a sort of wired “home theatre in a box” made by Samsung. It was so difficult to use that I simply trashed it after 3 months. I’ve never used a soundbar previously, but I had this installed more quickly than it took to unbox it and I put in my target sound-test Blu-ray disc (Moulin Rouge!) and began to play. The little-to-no sound had become spectacular. Spectacular!

I could have spent a fortune to get good sound from a traditional home theatre set-up, but this first experience has led me to believe that a soundbar and woofer are adequate more than adequate for sound in a bedroom.

I looked at different soundbars (I’m disabled, so ALL of my shopping is either online or picked up by my caregiver awkward when shopping for items when subjectivity comes into play) but this sounds as if it may be amongst the finest available. I have my older LG HDTV in my living room now, a newish LG Blu-ray player in my bedroom, an older LG Blu-ray player in my living room, scads of other things made by LG, etc. I almost bought a 55" LG UHDTV but the Consumer Reports article gave the Sony brand much high ratings.

I can’t recommend a more pleasant and simple to use soundbar. There may be others just as good but I can’t imagine one better.