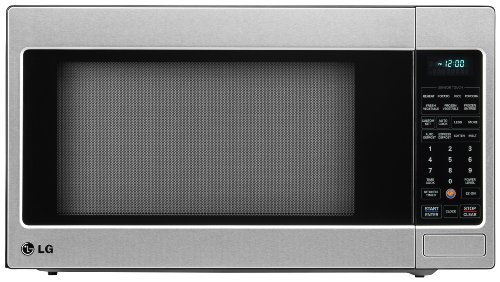 A great performer for the price...with some reservations

After LOTS of research by me, this unit made the short list of three selected on the basis of aethetics by my partner. Online reviews ranked this LG model almost as well as the Sharp R-530ES, but the LG was almost $100 less. The 2 year warranty was ultimately the deal clincher.

Thus far we haven’t used every feature, but have used it enough to learn it’s 20% more powerful than our (now deceased) KitchenAid microwave, and heats items very evenly. My partner is less than happy about the degree of doneness for autocooking bacon (preferring crispier bacon than I), but I think it’s perfect, and much more consistent than our old KitchenAid, which delivered bacon anywhere from barely cooked to almost black.

I really appreciate the curved cavity, as one of the problems we had with our KitchenAid was our maid’s tendancy to wipe the corners with a damp rag and then close the door, causing both corners to rust over time. I also appreciate the greater capacity and larger turntable, allowing simultaneous reheating of several dishes. Thus far, I think we have a winner!

After working flawlessly for 6 months, I went to open the door and it wouldn’t open. It turns out the inside of the door MELTED to the lip of the interior. It took the LG-authorized repair shop one month to determine it could not be fixed, and, after a bit of a hassle with LG reps, they shipped a new one. This one has a bit of a fit and finish issue, as it won’t latch if you push the lower part of the door and not the top. I’m holding my breath now…

I got this for Christmas and I couldn't be happier with the look, size and interior cleaning features! [This review was collected as part of a promotion.]

Bought this to replace our 13 yr. old 2.2 cu. Ft. microwave that started acting up (different brand). We have now had this one for a little over a month. Works great, love the 16 platter size (same as our old one), a big plus, as it allows room for a dinner plate and small bowl at the same time, or other container combinations, a big convenience in reheating a meal. The larger exterior size is worth the interior space. You would notice a 1.1 Cu. Ft. microwave on your counter anyway. Microwave is quite quiet when running. The rounded rear interior corners are a nice practical design feature. Those eliminate 2 corners making cleaning easier. The dark interior is different and takes some getting used to after seeing white/cream interior for 20+ years. But it does look nice. When cooking time is complete the beeper continues to beep every minute or so if you do not push the Stop button or open the door. That is a nice feature, so that you dont forget you had food in the microwave if you did not hear the initial beeping. The one thing we dont really like is that the control panel does not have a lot of contrast (white outlines) to easily see the specific buttons, as our old one did. Its a little difficult to input in dimmer light. It makes the front panel look more solid black when you look at it, a plus I guess, but you still know its a microwave sitting on you counter. Cant say anything about durability / life span, but hope it lasts at least the 13 years our old one did. Too many items today are being made as Disposable why make them last too long.