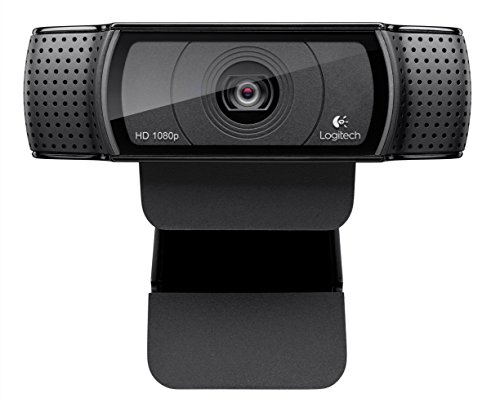 I was able to do a direct side-by-side comparison between three Logitech webcams: the C920, C615, and C525. Here is what I found:

Right away I noticed that the C920 was a superior product - as it should be, considering it is Logitech’s flagship webcam at the moment. But my initial impression was that the extra features might not be worth the size and setup tradeoff. There are three things that the C920 does not have:

But when I actually sat down to do some serious comparisons, I realized just how much more advanced the C920 is, most notably in its use of H.264 compression and its autofocus feature.

H.264 is a standard being utilized more and more for video of all sorts, and it makes a huge difference here. Having used all three webcams on the same computer and with the same software, the C920 compresses 1080p video completely while recording and takes about 49MB per 1 minute of recording on the highest settings (720p for one minute takes about 31MB). That uses *.mp4 format.

Also, the autofocus is much better on the C920, with less flickering and light change. You can really get up close and show off your pores and beard growth.

In conclusion, the optics and hardware of the C920 are obviously superior to the others, which are already high quality. If I am using the webcam while highly mobile, then I may opt for one of the others - I might even just settle for the C525 because it’s a tiny bit smaller than the C615 and I believe you cannot use the C615 to make 1080p video calling, even if your hotel’s Internet service could keep up with the data rate. However, if I am using a webcam at a stationary computer, or am really a videophile, then I definitely want the bigger workhorse.

I am completely satisfied with the Logitech C920 HD webcam. It worked great for videochatting with my wife and son while i was on the road. Easy to use and the picture quality was FAR superior to the built in webcam on my wife's computer. I couldn't believe how clear of an image it took. Great purchase.

@fuzal Thanks, You are the best

This camera is not technically intended for use with an Apple Mac computer. It does not come with any Logitech software that works on a Mac.

However, the camera is recognized by the Mac Yosemite operating system and works great with both Skype and FaceTime on my 2009 Mac Mini computer.

Using the Apple Photo Booth software, you can take a good selfie picture. Using the Apple QuickTime player software allows you to make a basic movie.

Using the Logitech Camera Settings app (available for free from the Apple App Store) you can make basic adjustments, such as color changes and turning manual focus on and off. This app also includes basic pan and zoom controls. I usually just leave everything at the default settings. Again, this software does not come with the camera and I could not find it on Logitech’s website. I had to download it through the Apple App store.

I recently used the camera to talk to a colleague in the Netherlands using Skype and couldn’t have been happier. The video and audio quality is quite good and way better than that of my old webcam. The colors look very natural.

The only problem that I experienced was a complaint of echoing. I solved this problem by turning down the camera microphone input volume (in the Apple System Preferences > Sound menu). After I did this, my friends said that I sounded fine. The echo was gone and they had no trouble hearing me.

I could have spent more money but there was really no reason to do so for my needs. You may have a little bit more control if you purchase one of the Logitech models which is technically Mac compatible. But for me, having a camera with above average audio and video at an affordable price was more important.

Again, the built-in Mac system software recognizes the camera and turns it on when you are in the applications that I’ve described. It is necessary to tell certain applications to connect to the camera (via built in menus) the first time the camera is used. But once that is done, you need not do it again.

Overall, I am very happy with my purchase.