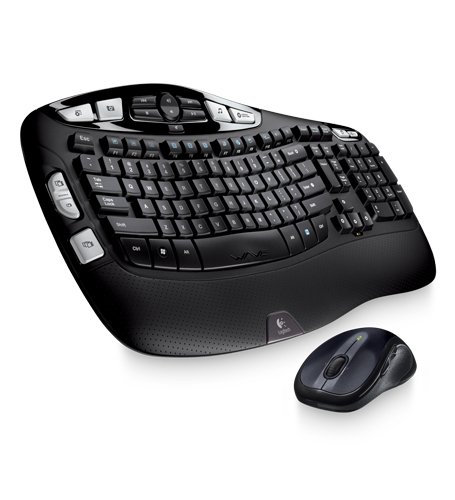 Great, comfortable keyboard and mouse for all platforms

OK, this review is for everyone out there who was like me--wondering about and trying desperately to figure out if this keyboard works with Macs.

First, I’ll describe the feel of the product in general. I love this keyboard. It might be a bit of a stretch calling the waveshape “ergonomic” but it IS incredibly comfortable and natural feeling. It’s an outstanding alternative to the common splitkey design if that isn’t your cup of tea (it isn’t mine either). For those who can’t really tell, the keyboard isn’t curved nearly as much as other ergonomic keyboards and the keys have a gradual “wave” shape going across the surface, basically creating two dips or ‘cups’ in the default QWERTY hand positions and an ebb or raised curve between them. The Numpad also has this curve for the hand. The keys are very soft yet springy and responsive. It feels good and, again, very natural to type on it. In fact, I think this keyboard has increased my WPM. It is a definite improvement over the flat, standard keyboard and ESPECIALLY the new wafer-style Apple keyboards. It’s soft feel is vaguely reminiscent of the old Apple G3 and G4 clear plastic keyboards, if anyone remembers those. Finally, I don’t know why anyone would do so with an “immersive” comfort keyboard like this, but it has a pair of flipdown feet in the back for the common “raised” keyboard setting–one set makes a 4 angle, the other an 8. But now the pressing question that I’m sure the other Mac users want to know: Does it work for our platform??

The answer is a resounding “yes”, with a few minor ‘buts’. The keyboard and laser mouse combo works perfectly and seamlessly out of the box with the Mac platform–literally just plug in the USB receiver and you’re typing a few seconds later. The box states that you must have a PC running Windows, but that is only because Logitech dropped OSX support for the macro editing program that comes with it. You do not need this program, you just can’t use Logitech’s software to customize the keyboard at all. You can still customize key combinations or macros with third party software though. The foil of this is that there are a few keys that the operating system doesn’t even recognize. Six of the eight silver program keys are incompatible with the platform and one more sends junk input–the equivalent of pressing nearly every key at once, causing nothing. These keys cannot be read by the OS thus they cannot even be used with third party or Mac software. They are just dead keys to you. The media control keys at the top do correspond to iTunes and control it seamlessly–stop, pause, play and navigate the music that plays without having to give precedence to the iTunes window, but be warned that pressing any of those keys will automatically start up iTunes. They are far enough away from the typing area that this isn’t a problem though. These keys cannot control video playback outside of iTunes, they are only for that program. The volume controls work perfectly, as does the power key. Finally, the function keys F1 through F12 do work and are recognized. They come preset for use with a function key on the bottom right of the typing surface and this is “highlighted” on the keyboard in blue. This system is designed to create more prewired shortcuts such as opening Windows Internet Explorer, Word, PowerPoint or Excel. None of these function combos work with OSX, even if you have the Mac versions of those programs, which is actually a good thing, because OSX defaults the F9-F12 keys for controlling the expose’ features anyway. Three things I wasn’t expecting that surprised me are that the printscreen key actually does activate the OSX built-in screengrab feature (command+shift+3), stranger still, the Pause/Break key controls the screen brightness–pressing the key increases the brightness and pressing Function+the key decreases it. Finally, the eject key defaults to F12 like most PC keyboards, but OSX overrides the F12 function by default to “show Dashboard”. If you go into the Expose’ System Preferences and change the key that activates the Dashboard (and make sure none of the other shortcuts for Expose’ are set to ‘F12’, then this key will work identically to the eject key on a Mac Keyboard. I highly recommend doing this, because it is hard to find a good third party keyboard that supports the OSX tray open/close command.

One final note about the key layout: by default, the Alt key, which lies directly left of the spacebar, is the ‘CTRL’ key in OSX and the CTRL key under the shift is the ‘Command’ key. This is an opposite layout to the standard Mac keyboard. You can, however, re-assign which keys call which modifiers in OSX System Preferences. This will orient the Wave keyboard to be in the ‘correct’ layout for Macs, but beware that, since the change occurs at the operating system level, if you connect a Mac keyboard to the computer for any reason, it will be flipped and you will have to go back into System Preferences and restore the original settings.

Now onto the Mouse. [PLEASE NOTE: the following review is for the the M705 Mouse that USED to come with this package. It’s still available separately, but the current version of the package does NOT have a mouse with the wheel I review here] I LOVE this mouse. It’s incredibly responsive and works on all surfaces save for maybe highly reflective glass. It’s a laser mouse, not an optical one, so light sources can’t confuse it and it doesn’t glow bright red or blue whenever you move it. It fits well in the hand and its scroll wheel is a work of art. One thing you can’t tell from the pictures is that the scrollwheel is “floating” in its container under the surface of the mouse. It has cumulative scrolling, so when it’s in “free mode”, you can spin it (literally, it just glides–like spinning the wheels of a toy car) and the scrolling will match it–not stopping until the mouse wheel itself loses all the momentum from being spun. This is an INCREDIBLY nice feature if you do film editing or anything similar and are accustomed to using the Mac scrollwheel or middle finger swipe to advance through frames in Quicktime or any other film editing program, though it is very nice for thumbing through documents and PDFs too. In addition to being fun, this is equivalent or perhaps even better than the Apple Magic Mouse’s “momentum scrolling” (scrolling that is faster or slower depending on the speed of the stroke or in this case the spin). Now, I absolutely love “free mode”, but if you need something more precise, there is a button on top of the mouse just behind the scrollwheel that will “lock” the wheel onto a track, giving it that smooth “clicking start/stop” feel that most PC mouses have. Press it again to disengage the wheel back into “free mode”. The mouse has three other buttons, all located on the thumbside–two arrow buttons and the entire thumbpad is actually a button too. For OSX, all three do the same thing, which is the same as the middle button or scrollwheel click. It may be possible to reassign these using third party mouse software, but I haven’t tried because I really only use that function for opening tabs in web browsers.

So there you have it: a great, comfortable and responsive quasi-ergonomic keyboard that works just shy of perfectly for Macs as well as PCs. I love it and I am very happy with my purchase. I HIGHLY recommend it for anyone looking for a ‘natural style’ ergonomic keyboard and ESPECIALLY for Mac users looking for the same.

I originally had the MK710 combo, which I had purchased via Logitech directly, but I had various problems with it and after it being replaced twice, decided to get a different one. I found this one in Sams Club and it had good reviews and with it being ergonomic I thought I would give it a try! It is my first ergonomic keyboard and I find it not too extreme in shape, but again like all the Logitech keyboards I have had, the keys stick and it throws in unwanted characters, which is a real bother. It also does not come with a display, whereby you can see if the Caps Lock or Num Lock functions are on, which I did not realise at the time of purchase! I thought this would not be a problem, but as I use the keyboard every day for several hours and constantly use the number keypad, I am seriously considering replacing this keyboard for another model! As stated earlier, I have had Logitech keyboards for quite sometime now, but I have not found one yet that is totally reliable.

If you spend a lot of time on the keyboard, the bluetooth wave is a great way to help keep those hands from getting tired so fast. I take mine with me in the bag with the laptop. I'm at the office no matter where I go now.

The customization features are pretty incredible. I only use a few of the buttons, but the ones I use have spoiled me completely to any other control surface on my laptop!!

I love the way the keys feel. There’s no click, but there’s a great response. When I’m really typing fast, I can feel that curved key surface working with me instead of against me.

If you’re looking for a more pronounced wave, this isn’t the keyboard for you. The curvature is mild, but just enough.

The only downside I’ve found is that the keyboard will double up on some keystrokes if I’m just a LITTLE too far away (like with the laptop on a side table next to my recliner. The best fix was moving the bluetooth receiver to the other side of the laptop. That was enough to completely eliminate the problem.

I’d recommend this to anyone who types for extended periods of time. This is not a gaming keyboard, but a typist’s keyboard.